Wes Vernon
So Tom Perez is the new boss of the Dems – GOPers, prepare for 'nastier than usual'

February 28, 2017
In selecting Tom Perez to head the Democrat National Committee, anti-American leftists have chosen the man to keep the fight going full-speed in their effort to make their capture of the Democrat Party complete.

There may be a more hard-bitten radical leftist in high office in the Democrat Party in the U.S. There may be. I just can't think of them at the moment. 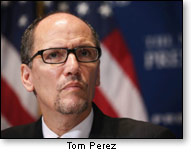 Thomas Perez has shown himself to be the personification of the fundamental belief that if a person disagrees with someone in power, that person is not just another human being with an honest opinion, however "wrong-headed." No, no. To someone like Perez, all political opposition is per se evil. Get in his way and you are subject to being labeled a bigot, or whatever phobia visits his dreams.

Mr. Perez has left a trail of damage to this country throughout the many positions of power he has held over the years. These have included Assistant Attorney General, where he headed the Justice Department's Division of Civil Rights, and Secretary of Labor.

He has held top jobs in federal, state, and local governments with an iron fist that demonstrated little restraint.

One of his political trophies is none other than Joseph Arpaio, "America's toughest sheriff," of Maricopa County, Arizona. As with many other of his political ventures, Perez's dealings with Arpaio were not always – in fact, rarely were – fair, or in America's best interests.

As head of the DOJ's Civil Rights Division, Tom Perez made it his business to slap down this man who had done much to protect Americans from the ongoing invasion of their country, and he filed a suit against Arpaio falsely charging the sheriff with "discrimination." And what did the Arizona law officer do to prompt that? Oh, he was enforcing the nation's immigration laws. You know, those laws that the Justice Department itself is sworn to uphold.

Sort of reminiscent of the occupiers in Europe during World War II who wore back shiny uniforms and carried huge flashlights.

Oh, these federal gendarmes were enforcing laws that the Justice Department itself was also sworn to uphold, all right. Can't have that, when a would-be Kommissar has scores to settle.

But do we bother with what the law says anymore? Naw! We had a president of the United States who earnestly urged illegal aliens to break the law by voting when that privilege is not a "right" for non-citizens. That did not work in Arizona, obviously, but may have helped Hillary carry California next door. If a meaningful investigation on illegal voters in 2016 someday finds that illegal voters put Hillary over the top in California, how delicious it would be to see if the Marxist-minded in that state would shut up about how Hillary "got the popular vote." Maybe they'd go through with their threat to secede and form their own country. Maybe Trump can build his wall further up the coast.

Tommy's beef against Arpaio was flawed – especially given that another federal agency, the Immigration Customs Enforcement Agency (ICE), had previously conducted its own probe of the Arizonan and found his lawmen to be "professional" and meeting the requirements that were expected of them, including those dealing with racial profiling and racial issues involving illegals. (Note: I refuse to call them "undocumented." Since when did we call a bank robber "an undocumented banker?" Hmmm?) 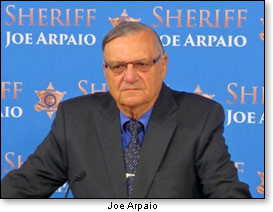 But after seven years, Tommy finally drew the political bead on Arpaio and handed "documented" Americans one of their few victories on election night November 8.

The Arizona lawman's defeat was one of the few disappointments for pro-Americans that night. After 24 years, the relentless pounding by the pro-lawbreaking elements had taken its toll, and Arpaio went down to defeat.

It figures that someone with Perez's mentality would have easily found himself at home working for Barack Obama and Joe Biden, both of whom waxed enthusiastic over his position in their administration. After all, according to the authors of the book Power Grab – Dick Morris and Eileen McGann – the 8 years of the Obama White House included "letting the worst offenders out of prison and handcuffing efforts to keep us safe." (Note: And as we saw in his last hours in the White House, Mr. Obama stuck with that mindset to the very end.)

Barack Obama must be pleased that Perez won the DNC chairmanship. At one time, Perez was president of Casa de Maryland, a pro-lawbreaking, Soros-backed group that advised illegal aliens in a pamphlet how they could avoid being caught. Well, Obama has done that, as we noted. So, Mr. Ex-President, here's your man to carry on your "legacy."

This writer's closest view of Perez came when I was a constituent of his on the local level when he was a member of the Montgomery County Council in Maryland. There, I concluded that this man should not be allowed to get anywhere near the power centers where public policy is made, organized, and enforced. (No, we never met.) Every time I see a publicity photo of him, I see someone who looks like he could be a mama's boy. Looks, however, can be misleading. This man is a hard-bitten "skeptic" (to put it mildly) of much that has made the United States of America the envy of the entire world and the target of pro-lawbreakers.

Mr. Perez just can never pull himself away from his far-left politics, even when he's addressing non-partisan or bi-partisan audiences. He is an advanced, hard-boiled version of the country's years-long morph from moderate Republican to liberal Democrat to far left.

Now he's Democrat National Committee Chairman – no doubt positioned to nudge the Democrats even more to the left than they already are.