December 24, 2009
Editor's note: Philip J. Berg, former deputy attorney general of Pennsylvania and an activist attorney who brought a lawsuit challenging the eligibility of Barack Obama to become president of the United States, has written the following reply to Jamie Freeze's Dec. 22 RenewAmerica article "Facts are stubborn things: Obama is a natural-born citizen." 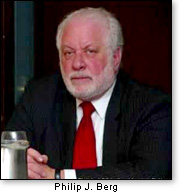 Jamie Freeze, a law student, has called any of us who question Soetoro/Obama's citizenship status and constitutional eligibility to serve as U.S. President  a constitutional right of ours, of course  incompetent idiots. Ms. Freeze, however, may want to continue her education. Part of being a lawyer, a very important part, is being able to comprehend what you read and to cite the correct law to collaborate it, something Ms. Freeze has clearly failed to do.

This type of thing by Ms. Freeze is what gives folks the WRONG information and confuses them. It is a deception by Ms. Freeze (as a law student, I hope her professors teach her how to properly, honestly, and with integrity investigate, research the laws, properly cite the laws, and argue issues before her). Otherwise, she will be unable to do her clients  when that time comes, assuming she passes the bar  justice.

Facts are stubborn things: Obama is a natural-born citizen

I never will forget meeting former North Carolina State Senator Hugh Webster my senior year of high school. He came to my school and had lunch with the seniors. As he sat down beside me, I asked him to tell me what he most loved and hated about being in Raleigh. I don't remember what he most loved, but I'll never forget what he most hated. In the words of Mr. Webster, "I don't deal well with incompetent people."

Ms. Freeze, unfortunately, is showing her "INCOMPETENCE," as Ms. Freeze would call it, but I feel "IGNORANCE" is the more appropriate word, as outlined below.

At that point, I knew Mr. Webster and I were kindred spirits. I too don't deal well with incompetent people. As a matter of fact, I go out of my way to avoid them, but when dealing with them is inevitable, I can't help but point out their incompetencies. As a law student, I am being trained to be meticulous, well-reasoned, and intelligent. After my final exam grades come back, we'll see how well I'm doing. But that aside, I feel that I have been too longsuffering in letting the Birther Movement receive simply a few caustic remarks and jabs from me. It's time for me to call a spade a spade. Here goes: If you believe that President Obama is NOT a natural-born citizen, then you are an incompetent idiot who is probably watching Glenn Beck while wearing a tin-foil hat. You probably think Obama's a Muslim too.

Our lawsuits have nothing to do with Soetoro/Obama's religion, they never have. Ms. Freeze seems to have lost a very important part of her education. We as people are entitled to redress, and we as people are entitled to ask questions, especially of our elected officials. Incompetent idiot? It appears that Ms. Freeze's law school has taught her that when you cannot counter something, call the opposing party names. That is not what I was taught in school. I do not see one shred of evidence that supports Ms. Freeze's position. Ms. Freeze obviously forgot about Barry Soetoro's name: Did she locate where he legally changed his name to Barack H. Obama? It is fraud to run for and serve as President under an "alias" name. What about Soetoro/Obama's Indonesian citizenship? We have the school record, which Soetoro/Obama has admitted too.

If you are still reading (and not firing off angry emails), then allow me to offer you factual proof that Obama is a natural-born citizen who satisfies the constitutional requirements for Commander-in-Chief. My argument is two-fold: 1. Obama was born in Hawaii (a U.S. state for my incompetent readers). 2. Obama satisfies the requirements found in the Immigration and Nationality Act of 1952, which defines natural-born citizens.

Where is the factual proof? Ms. Freeze apparently forgot to attach it. What does Ms. Freeze have to back up the assertion that Soetoro/Obama was born in Hawaii? We have been unable to obtain verification of that  no long form birth certificate, only an image that has been deemed a forgery. Despite this, what about his Indonesian citizenship? Had Ms. Freeze read our briefs, and retained the information, she would have seen that all we do is talk about the Nationality Act of 1940, revised in 1952.

1. Obama was born in Hawaii. Hawaii joined the Union in 1959. Barack Obama was born in 1961. Do the math. It works. Ok, so perhaps that argument is a bit over-simplified, but that is because I find the birth certificate question so ridiculous. The President released his birth certificate (which was verified by the Hawaii Health Department) yet conspiracy theorists refuse to see logic. "Big bad Obama must be hiding something. That certificate isn't the long form. What's he hiding?" What the naysayers fail to realize is that in 1961 the standard Hawaiian birth certificate was...wait for it...exactly the same length as Obama's! The Hawaiian Health Department has said this, but as conspiracy theorists point out, they must be covering for Obama. Despite the facts, folks say that even if he was born in Hawaii, he is not a natural born citizen because his father was Kenyan. However, even if Obama was born on the moon, he would still be a natural born citizen under the Immigration and Nationality Act.

One last question I have for Ms. Freeze: If in fact Soetoro/Obama was a U.S. "natural born" citizen and eligible to serve as our United States President, why in the world would he spend in excess of a million dollars litigating these cases instead of just proving his citizenship status? I'm curious to see how Ms. Freeze would respond. We know the answer, because Soetoro/Obama can't.