Recently, we received the following message from Alan Keyes' national pro-life organization  Declaration Alliance  appealing for support of a criminal complaint filed by DA and Larry Klayman of Freedom Watch alleging that Elena Kagan defrauded the Supreme Court by altering a scientific report on partial-birth abortion when she was an attorney for President Bill Clinton.

The complaint, which Declaration Alliance and Freedom Watch filed July 28 before the Supreme Court, demonstrates from court records that Kagan altered a scientific analysis  inserting her own words  and passed off the analysis before the Supreme Court as official scientific opinion, fraudulently influencing the court to overturn Nebraska's partial-birth abortion ban in 2000.

The complaint seeks to have Kagan disbarred from practicing before the Supreme Court, as well as investigated for obstruction of justice.

Please read the appeal from Alan Keyes below and give this praiseworthy legal action your support.

Reid-Forced Vote Covers Up Kagan Conspiracy
Ben Nelson (D-Neb) is the first Democrat to oppose Kagan: "... I have heard concerns from Nebraskans.... Therefore, I will not vote to confirm Ms. Kagan's nomination."

Breaking News: Reid planned a vote THIS WEEK on Kagan's confirmation just days after Declaration Alliance retained noted corruption watchdog attorney Larry Klayman to file an ethics complaint seeking to have Supreme Court nominee Elena Kagan disbarred from practicing before the court she aspires to join  and possibly subjected to criminal prosecution  for her role in an escalating scandal.

Please SELECT HERE to HELP US KEEP THE SUPREME COURT FREE OF CORRUPTION. Your special DONATION will assist the Declaration Alliance and STOP KAGAN in court, as well as defend America against the willful deception of the highest court in the land by those who desire to control it! 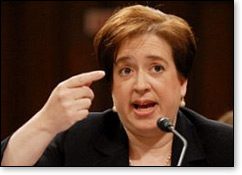 The Declaration Alliance complaint has put REID INTO A POLITICAL CRISIS, the pressure is getting to him and he is afraid to allow the debate of Kagan's record to be widely exposed to American voters. Democrats are wavering: Bennet, Boxer, Murray, Feingold, Lincoln, Tester, Begich, Webb, Baucus, Landrieu, Burris, Bayh, Dodd, and Specter  PLUS RINOs Lugar, Graham, Collins, and Snowe  are still being heavily lobbied to act like the CONSTITUTION STILL MATTERS, and your donations will be used to turn up the pressure.

The Cover Up Vote by Reid is a transparent attempt to hide the fact from Americans that Kagan conspired to fraudulently alter an official scientific report used as evidence by the Supreme Court. This report persuaded the justices to overturn bans on partial-birth abortion  and then, Kagan recently lied about her actions under oath during her SCOTUS confirmation hearings! Senator Jeff Sessions told The Hill that Reid's bum's rush "may be an attempt to compact the nomination so the American people aren't as able to be attuned to what's occurring. The nominee isn't particularly popular with the American people. So maybe they want to force it through. It's not good."

Kagan's political maneuvers while an attorney for President Bill Clinton led to language authored by her becoming fraudulently accepted as "official findings" of a medical "expert panel."

Kagan's inserted language misled the federal courts, including the Supreme Court, into upholding for nearly a decade legal protections for the heinous practice known as partial-birth abortion that 30 states had attempted to ban. Klayman, founder of the Judicial Watch and Freedom Watch USA public interest law groups, is bringing the complaint at the behest of Declaration Alliance, the national pro-life social welfare organization I founded in 1996.

Please SELECT HERE to HELP US KEEP THE SUPREME COURT FREE OF CORRUPTION. Your special DONATION will assist the Declaration Alliance and STOP KAGAN in court, as well as defend America against the willful deception of the highest court in the land by those who desire to control it!

The complaint alleges Kagan fraudulently altered an official scientific report used as evidence by the Supreme Court to persuade the justices to overturn bans on partial-birth abortion  and then recently lied about her actions under oath. 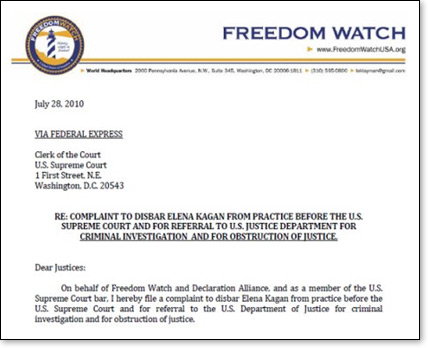 Select Here To Read The Entire Complaint
Dozens of pro-life organizations are already calling for a Senate investigation of Kagan's 1997 alterations to an American College of Obstetricians and Gynecologists (ACOG) expert report, which was then relied upon by the Supreme Court as medical, scientific justification for overturning Nebraska's partial-birth abortion ban in 2000.

In her confirmation hearings, Kagan may have perjured herself during the course of Justice Committee questioning about her actions in having altered the report. She defended her participation in political meetings and editing of the report by stating, "My only dealings with ACOG were about talking with them about how to ensure that their statement expressed their views."

In light of detailed review and analysis by Americans United for Life Action and other groups of Kagan's contemporaneous documentation on these matters, there can be no doubt that this testimony is false and misleading. Kagan's amended language to the ACOG report was politically negotiated and strategized, and it dramatically changed the meaning of the ACOG statement. Court records show the ACOG report as altered by Kagan was passed off to the Supreme Court as official scientific opinion, even though the ACOG's panel of scientists never reviewed or approved Kagan's wording.

Declaration Alliance believes Kagan's behind-the-scenes work constitutes "conspiracy to defraud the Supreme Court," and in the public interest is urgently taking the evidence that has been compiled by pro-life groups and exposed in Kagan's confirmation hearings to file a complaint before the clerk's office of the U.S. Supreme Court, seeking to have Kagan disbarred as a practicing lawyer in front of the Supreme Court.

And on advice of counsel, Declaration Alliance will not stop there.

States Klayman, "Then I'm going to ask the Supreme Court to refer the matter to the Justice Department for criminal investigation and possibly prosecution of obstruction of justice, because it was reasonably foreseeable that her altering that [ACOG] report would ultimately be used in court proceedings, including but not limited to the Supreme Court."

Even if Kagan is confirmed by a vote in the Senate, Declaration Alliance will not give up the fight. "If she is ultimately confirmed  and we can hope that she will not be  then we will go to phase two, which will be impeachment," stated Klayman.

Declaration Alliance will pursue all recourse under law to ensure that justice prevails against Kagan's abuse of the public trust. Any pro-life, pro-family, pro-Constitution civic organization also desiring to uphold the ethical standards of American justice by aggressive pursuit of sanctions against Elena Kagan is invited to join in this effort. For more information, please call toll free 866-243-3172.

Please SELECT HERE to HELP US KEEP THE SUPREME COURT FREE OF CORRUPTION. Your special DONATION will assist Declaration Alliance and STOP KAGAN in court, as well as defend America against the willful deception of the highest court in the land by those who desire to control it!

Freedom is not free, but then, it's impossible to put a price on the sanctity of innocent life.

Together, we can preserve the God-given, unalienable rights our Founding Fathers enshrined in our nation's Creed, our Declaration of Independence, and codified in our Law, our Constitution! Our wise Founders intended that our people, and all humanity, should uphold and have forever these inviolable rights, from our Creator  life, liberty and the pursuit of happiness.

For more information about Declaration Alliance go to www.declarationalliance.org

Thank you. I know I can count on you. Please DONATE TO Declaration Alliance TODAY!


DeclarationAlliance.org is authorized and paid for by Declaration Alliance (DA), a 501(c)(4) social welfare organization which focuses on nonpartisan civic education and advocacy regarding important national issues.