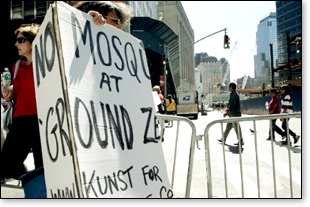 A 9/11 "first responder" has brought a multimillion-dollar class action suit to stop a planned mosque and cultural center near Ground Zero, saying the controversial project posed a "terror risk" and amounted to "an assault" on Americans.

The $350 million suit was filed Friday in the New York Supreme Court by Larry Klayman, founder of Judicial Watch and Freedom Watch, on behalf of Vincent Forras, a volunteer fireman who was severely injured during his efforts to save innocent lives on September 11, 2001.

Mr. Forras brought the suit against the Ground Zero Mosque developers and its terrorist-connected Imam, alleging the mosque represents a security threat and is intended to carry out continuing psychological warfare  that is, terrorism  against the people of New York.

A copy of the complaint as filed in court can be found online at Freedom Watch and Declaration Alliance.

A Sept. 10 press release by Freedom Watch stated, "The lawsuit rests not upon any claims against Islam, but rather on harsh and compelling national security realities. Even President Obama and Mayor Michael Bloomberg have been forced to concede that terrorists are prone to again attack the people of New York City at Ground Zero, and that reality and the public outcry it engendered forced them to move the planned trial of Khalid Sheikh Mohammed in the federal court from here in Manhattan earlier this year."

"Planning repeated attacks and fomenting terror  such is the twisted, sick, and vicious modus operandi of Al Qaeda, Hamas and other terrorist groups, who already have attacked Ground Zero twice at the World Trade Center, at Times Square, and have targeted the Lincoln Tunnel and numerous other places in the area," the statement continued.

"To attack again and again is the nature of terrorist strategy, and the Ground Zero Mosque and its Imam have well-documented ties to known terrorist groups. And the very announcement that a mosque is going to be built in immediate proximity to America's hallowed ground of loss causes severe symptoms of distress to Mr. Forras and other members of his legal class, who suffer daily the physical and emotional wounds of the horrific events endured on September 11, 2001."

"In this age when our government has abandoned respect for the will of the people, we owe a great debt of gratitude to Mr. Forras and the other First Responders who are again putting their lives, fortunes and future on the line to protect America and its citizens. This case is a strong case and while not directed at Islam, is specifically focused upon the terrorist-connected Imam and the Ground Zero Mosque that threatens New York City."

Klayman added, "We will not rest until the Ground Zero Mosque is legally forced to go away, and the people of New York and the American nation as a whole can have some peace to heal the wounds of September 11, 2001," added Klayman.

The suit  which calls the proposed center "a monument to the jihadist's victory over American ideals of freedom and democracy, [and] a desecration of the terrible sacrifice made by those innocents attacked"  alleges the project would be another phase in radical Islam's jihad against the U.S. and would impose "terror" on "the people of New York."

The suit seeks damages for nuisance, emotional distress, and assault.