Did Mitch McConnell really propose allowing Obama discretionary authority to raise the debt limit for the remainder of his term? According to an AP story I read Wednesday, that's exactly what he did.

Minority Leader Mitch McConnell, R-Ky., offered a new plan to allow the president to demand up to $2.4 trillion in new borrowing authority by the summer of next year in three separate submissions. Those increases in the so-called debt limit would automatically take effect unless both the Republican House and the Democratic Senate enact legislation specifically disapproving it.

Obama would be able to veto such legislation.

In her commentary on Wednesday, Ann Coulter derides the adverse reaction to this proposal of those she refers to as "some hysterical Republicans." She contends that contrary to their view, "McConnell's bill does not forfeit any of Congress' authority. The House and Senate will still have to decide whether to accept Obama's proposed cuts when they write their appropriations bills."

In the fashion often characteristic of people accustomed to think that humor is a substitute for careful reasoning, Coulter uses name-calling to parry the imagined blow of McConnell's critics. Her aim is to distract readers from the cardboard quality of the argument she uses to shield him from what would otherwise be their common-sense agreement with his critics. Readers unfamiliar with the logic of the Constitution's approach to money issues will doubtless be impressed by her weightless argument's decorative qualities. I am not among them. 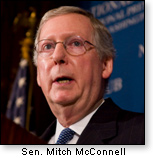 Is it just a coincidence that the U.S. House of Representatives currently reflects what appear to be the deep concerns of people at the grass roots, while both the Senate and the presidency appear to be mainly influenced by elitist opinion and priorities? Is it just happenstance that the House more accurately represents grass-roots resentment against fiscal policies that consolidate elitist control of the nation's economic activities and resources? As elitists seek to overturn the constitutional sovereignty of the American people, when Mitch McConnell proposes a procedure that takes the initiative in money matters out of the hands of the U.S. House to place it — however conditionally — in the hands of the executive, is it prudent and sensible to see this de facto amendment of the Constitution exclusively in the context of what appear to be the politics of the moment, as nothing more than a cunning political ploy?

Is this a de facto amendment of the Constitution? The Constitution (Article I, Section 7) provides that "All bills for raising revenue shall originate in the House of Representatives; but the Senate may propose or concur with amendments as on other bills." Beyond verifying the mere fact that they did so, this citation naturally leads us to think about why the framers singled out money-raising bills in this way. We know from The Federalist and other such writings that they were acquainted with the history and practices characteristic of republics since ancient times. They therefore knew that in dictatorial republics (Corinth and Syracuse when ruled by tyrants, Rome during periods of dictatorship), one ruler (literally the monarch) monopolized the prerogative of legislation. The sovereign right to initiate, promulgate, and enforce the law was in the hands of the tyrant or dictator.

In republics ruled by the few (oligarchic republics), a relatively small elite group monopolized the prerogative of proposing laws. Some, like Sparta, would allow a somewhat larger group of elite citizens to vote on these proposals, while leaving the multitude of inhabitants with no choice but acquiescence, resistance, or rebellion. By contrast, in democratic republics like Athens, the multitude of the citizens directly exercised the sovereign power of legislation, with results prone to be determined by tumultuous passions, manipulated by demagogues ultimately intent on substituting their own tyrannical rule for that of the people. 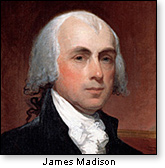 Because none of these alternatives produces a result both just and stable, the framers of the U.S. Constitution devised a historically original alternative. The scheme of representation (as Madison called it) puts the direct power of legislation in the hands of a few, who are to the people at large what the Spartan citizens were to the mass of Sparta's inhabitants. But unlike the Spartan elite, these few are subject to periodic election by the people, who can by this means pass judgment on the results of their use or abuse of the lawmaking power. Yet again, however, in the composition of the body that exercises the legislative power (the U.S. Congress), this division between the many and the few is reproduced, with the U.S. House of Representatives intended to approximate more directly the views and characteristics of the people in their grass-roots communities.

As I consider McConnell's suggestion, I find myself thinking of the Gulf of Tonkin Resolution, the War Powers Act, and the other steps by which the U.S. Congress surrendered its constitutionally mandated initiative in respect of the war-declaring power of the U.S. government. With 20-20 hindsight, many today decry the surrender of constitutional prerogative that allowed Obama deceptively to claim the right to involve the U.S. in purely offensive war-making in Libya, without congressional approval.

Is McConnell's proposal part of a similar surrender with respect to the money issues? It masquerades as a clever ploy intended to tag Obama with the damaging political consequences of the U.S. government's runaway spending and indebtedness. But it's too clever by half (or is it two-thirds?). McConnell's proposal actually shifts the initiative in money matters away from the body intended to represent people at the grass roots to the executive. The executive gains a free hand so long as he is supported by an override-proof minority of the U.S. Senate (i.e., the one-thirds that blocks both a veto-override and any Senate decision to remove the president from office after his impeachment by the House).

Given present circumstances, this shift may appear to be narrowly focused on the supposedly arcane issue of the debt ceiling. (Actually it's no more arcane than a parent's decision to require a limit on any credit he co-signs for college-age children.) But, as I discussed in my column last week, the U.S. Constitution's 14th Amendment makes it unconstitutional to cast doubt on the lawfully authorized public debt of the United States. Give the executive branch license to contract new debt without explicit congressional action, and you are actually empowering it with a constitutional argument that forces the Congress to approve the new expenditures required to service that new debt.

But this borrowed money is acquired subject to the terms of a contract with the creditor (China for example), rather than to any bill approved by the U.S. Congress. With no need for prior congressional approval, what will prevent the executive from using borrowed funds to finance whatever schemes and projects he (or the foreign powers backing him) likes, while claiming that the language of the 14th Amendment constitutionally requires the Congress to appropriate the funds needed to deal with the consequences? McConnell's proposal thus opens the way to a regime of executive prerogative that would turn congressional action into a mere rubber stamp of executive decisions, much as the Roman Senate became the rubber stamp lickspittle of the Roman emperors and their cohorts.

If the GOP really wants to force Obama's hand, they should simply propose legislation, based on the 14th Amendment's language, that requires the executive to give first priority in expenditures to servicing the debt, including veteran's pensions and the Social Security system's paid-for retirement and survivor benefits. This would assure respect for the Constitution and for the promises the nation has made to its defenders and working people, while forestalling Obama's abusive efforts to intimidate America's seniors.

As for McConnell's shift of power to Obama, this is the way the republic ends. This is the way the tyrannical empire rises. The Republican Party makes a show of caring about the U.S. Constitution. Do the actions of leaders like McConnell prove that it is all a sham; or do they simply prove that the GOP's leadership lacks the competence to understand and defend what they profess to revere? Either way, what sense does it make to pretend that a party subject to such leadership offers an alternative that will save the American republic? Whether from treacherous malice or tragic incompetence, they simply hasten its demise.