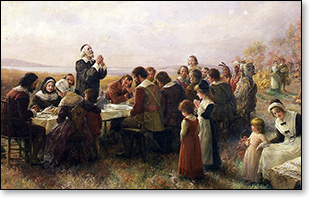 Let us give thanks to Almighty God on this day of Thanksgiving for our manifold blessings, even as we as citizens and families seek to discern God's will for our nation in these troubled times.

And as we do so, let us emulate our nation's two greatest presidents – who bequeathed us this day of national Thanksgiving – in asking with all humility His continued blessings and protections for our nation, and His forgiveness for our countless transgressions of His will.

For we know the stinging truth: America's many problems stem, above all, from decades of faithlessness; of failure to live fully, openly, and unashamedly in righteousness as we are called to do.

We are assured in our nation's Founding Creed – our Declaration of Independence – and in our Constitution and in all our founding documents, laws, and institutions, that our government is based upon a natural law philosophy establishing the ordered liberty that is America. This philosophy stands unique in human history as the God-honoring champion of human equality, and the guarantor of unalienable rights of life, liberty, and property of every human person, the defender of the rule of law. 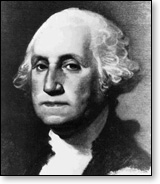 A paramount obligation of the state, because of the duty owed to the Supreme Judge of the Universe, is our respect for the God-given right to the free establishment and free exercise of decent, God-fearing religion. America's Founding Judeo-Christian religious faith and convictions form the moral and intellectual foundation of the American regime.

Yet with what vigor and boldness have we publicly lived out the very blessings of liberty entrusted to us by our great American experiment in responsible self-government under God?

We, as God's people, still allow our politicians, courts, and bureaucrats to keep taking step after step to erode our God-ordained freedom, outlaw public expression of our faith, and deny the spiritual foundations of our great nation! The banning of God from our national common life – from our courthouses, our public schools, our military – proceeds apace. Legal protections, and religious and moral equivalence, are accorded to murderous philosophies and depraved practices that are the antithesis of the true sanctity owed to our Creator God.

For God to bless America, as our troubled society so desperately needs Him to do, outspoken leadership from the humblest to the loftiest levels must call our nation to repentance, and to action. And there is no better high ground on which to make our stand than to seek an end to the reigning tyranny in Washington that mocks God and continually subverts our troubled society.

To put a halt to these usurpations requires us to humble ourselves, to pray, to act with courage – and to insist that our public officials, from city councils to the Oval Office, and our Congress, halt the government's encroachments upon our free exercise of our Judeo-Christian faith.

As we enjoy this day of Thanksgiving with family and friends, let us pray for forgiveness for our manifold sins and affronts to our Heavenly Father. No virtue of ours, but only His infinite Grace and Mercy, and the glorious promise of the Resurrected Christ, can provide hope for us.

Let us pray for strength and fortitude to defend God's authority over the sovereignty of the American people – a power of self-governance and self-mastery entrusted us, in our human equality, by God the Father. Let us pray to suffer no longer from a lack of clarity and forthrightness about how America must address crucial issues of justice, moral law, national security, and the requirements of constitutional order.

For America's sake, let us today commit to step beyond the weak conventions of professing only "private" faith and summon the courage – each of us – to be a strong advocate of national, public obedience to the authority of our Creator God and His moral law.

Let us remember that far too many of our fellow countrymen now accept the false doctrine of absolute "separation of church and state," as if embarrassed to bear witness to the Faith of our Fathers.

History teaches us this truth: nations follow the moral example of their leadership. So let us re-read the wise and humble words of our great leaders, Presidents Washington and Lincoln, who knew that "those nations only are blessed whose God is the Lord."

Let us make Thanksgiving Day this year a day of contrition, in obedience to 2 Chronicles 7:14: "If my people, which are called by my name, shall humble themselves, and pray, and seek my face, and turn from their wicked ways; then will I hear from heaven, and will forgive their sin, and will heal their land."

And then let us resolve to act decisively, in our own communities, to live our faith. For only by honoring God and his Supreme Authority in the affairs of men may we return America's constitutional order to its necessary equilibrium of sovereignty of a godly people; limited power among our branches of government; sound ethics to public service – and in this faithfulness, become again a nation and a people worthy of receiving the Gift of God's unfathomable Grace.