Margaret Sanger or progressives: who should we fear more? 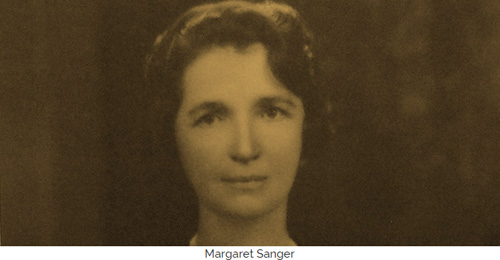 Was Margaret Sanger, the founder and perpetual spirit of Planned Parenthood, a eugenicist? Does she (and did she) accurately represent TODAY'S resurgence of eugenics and progressivism?

In other words, did Sanger see her banner for birth control as primarily for the purpose of perfecting the human race with control over reproduction and population?

Well, yes and no.

There's no question that Sanger believed in eliminating poverty and "defective" persons through birth control. In Woman and the New Race, she said that "natural law makes the female the expression and the conveyor of racial efficiency" (p.229).

As the instruments of human reproduction, women were Sanger's key to ending the unrestrained fertility that was ceaselessly "creating slums, filling asylums with insane, and institutions with other defectives" (p.6).

Sanger even despised the "unfit" women who continued to bear babies. Her rhetoric about freedom and women's rights was intended only for those women who had the desired racial, intellectual, moral, and even cultural characteristics that they would pass on to children.

Sanger clearly flirted with merging with the eugenics movement of the early 1900s. Nearly half of the National Council of the American Birth Control League in the 1920s were prominent eugenicists. The League's office was initially located in the headquarters of the American eugenics movement. (See Angela Franks, Margaret Sanger's Eugenic Legacy, for the full story.)

Sanger nevertheless parted ways formally and organizationally with the eugenics movement (Franks, Ch.4). Eugenicists were focused on population control, grand schemes of euthanizing supposedly undesirable people, and forcibly sterilizing women and children, and not sufficiently concerned with the plight of middle class and upper class women who wanted better "control" over "their" bodies. In her heart, Sanger was more concerned with the exaggerated plight of pregnant women than she was with creating a utopian society.

In other words, Sanger represents the confusion between political liberals and progressives in today's America: Liberals want government to serve as an instrument of raising up inherently valuable but systematically disadvantaged persons, while progressives have seized government as a tool for TRANSFORMING individuals – women as well as men, and anyone categorized as something in-between – into reproductive servants for perfecting the human race. Liberals believe in human rights; progressives use human rights cynically as a weapon to undermine their political enemies.

This is the reason why liberals like Joe Biden seem like dinosaurs when they claim to abhor the murder of babies through abortion while they defend the inherent right of women to "control" their bodies. Margaret Sanger would be proud.

Progressives have, true to their infatuation with scientific "progress," moved well beyond Mr. Biden, Mrs. Sanger, and the liberals.

Today, human reproduction seems poised to develop beyond the simple process of genetic characteristics being passed through intercourse to new generations. The British government (the U.S. will follow dutifully) has approved the creation of "three-parent embryos," a form of cloning that has enormous implications for the genetics of future generations beyond the one being treated and which has been banned as truly abhorrent in dozens of countries.

The nation that colonized nearly half the world has also, in its infinite wisdom, allowed researchers of the "three-parent embryo" technique to forego testing on non-humans. That is apparently too much of a burden on the procedure that has very little medical justification.

Are abortion and the newer reproductive technologies – those overseen by our progressive political overlords – in the service of eugenics? Consider that Supreme Court Justice Blackmun, in the 1973 Roe v. Wade decision to legalize abortion, relied very heavily on a book by eugenicist Glanville Williams for his muted understanding of the arguments for legalized abortion and the natural and common law arguments against it.

In 2009, Supreme Court Justice Ruth Bader Ginsburg, always happy to make moral people cringe, said: "Frankly I had thought that, at the time Roe was decided, there was concern about population growth in populations that we don't want to have too many of."

Consider that progressives have waged an all-out war (e.g., gay "marriage") to destroy the natural family as the basis for our society. They are wiping out private control over reproductive decisions entirely.

As a final note, please remember that, while progressives like President Obama taunt our Pope Francis about the extent of abortion, it is in the nature of evil to taunt. Emptied-out, lonely souls must scream and stomp their feet, trying to be heard by those who know better than to bother listening.

Our Lord Jesus Christ has already won us this victory. Go forth in faith and courage to drive the progressives from our land.

THE CULTURE OF LIFE STUDIES PROGRAM, AN EDUCATIONAL SUPPLEMENT PROGRAM BY AMERICAN LIFE LEAGUE FOR SCHOOLS AND HOMESCHOOLERS, HAS A CRITICALLY ACCLAIMED VIDEO SERIES ON MARGARET SANGER FORTHCOMING. SEE CULTUREOFLIFESTUDIES.COM OR CALL US AT

Christopher M. Reilly is director of external relations at American Life League. His book Deadly Progressivism: The Rebirth of Eugenics in the 21st Century should be available in a month.