The dog that didn't bark: Solving the mystery of what Donald Trump is all about

Gregory (Scotland Yard detective): "Is there any other point to which you would wish to draw my attention?"

Sherlock Holmes: "To the curious incident of the dog in the night-time."

Gregory: "The dog did nothing in the night-time." 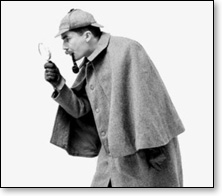 Sherlock Holmes: "That was the curious incident."


Sometimes you can learn more about a politician by paying close attention to what he doesn't say than by what he does say.

So I'm not going to point in this missive much to the things Trump said, or shouted, from the podium last night at the close of the 2016 GOP convention.

I'm going to point to the dog that didn't bark.

Trump dropped the names of a long litany of people in his speech. But one particular Person was almost completely missing from the presentation: Almighty God. Even the obligatory, perfunctory "God bless America" that was inserted at the end in the pre-written text wasn't actually uttered by Trump. Apparently he forgot to read it off the teleprompter. He did manage to get out a "God bless you," as a last afterthought. That was it. Perhaps someone in the crowd sneezed.

Also completely missing was any sense of our national obligations to God, to do right, to enforce justice, and to walk humbly before Him.

Also nowhere to be found was our national first premise, our historic understanding of the self-evident truth that our rights come from God, not from mere men, and that because of that, those rights are unalienable.

And it wasn't just God, or our national obligations to Him, and to each other, that was missing. Trump also totally ignored another whole set of very important persons: the innocent victims of abortion. He spoke rightly of victim Sarah Root as "a child to sacrifice on the altar of open borders." But he completely ignored the more than 3000 innocent little boys and girls who are sacrificed every single day in this country on the altar of "choice" and illicit judicial power.

He spoke of "safety at home." What about safety in the womb?

He said that he has "no patience for injustice." Really? What about justice for the sixty million or more defenseless victims of the American holocaust?

What about the next sixty million who will be slaughtered because political elites like Trump do not care to even mention, much less obey, God, or fulfill their constitutional obligations, or protect the innocents in their mothers' wombs?

Our wise founders, in addition to premising our form of government on the reason human government exists – the equal protection of the God-given, unalienable rights of us all – stated clearly that the ultimate purpose of our great Constitution was "to secure the Blessings of Liberty to our Posterity." They placed the rights of that posterity on an equal, or even superior, plane to their own rights.

But, sadly, our posterity, those who are not even yet conceived, were not worth a mention either.

If he cared about those things, he would have considered them worthy of mention during the biggest moment of his life, with the whole world watching and listening.

What does he care about? Getting elected. How is he going about getting elected? By continually puffing himself up and pandering shamelessly to you with thundering promises about "deals," and security, and law and order, and how he is going to make you rich.

Arrogant promises he can't possibly keep. Why? Because he is utterly ignorant, utterly silent, about the absolutely essential predicates for any possible security or prosperity for our country, both now or in the future.

Pay close attention to the dog in the night-time, folks. It just might solve the whole mystery for you. If it's not barking, there is a very important reason why this is the case.

Tom Hoefling is running for president as the America's Party candidate.