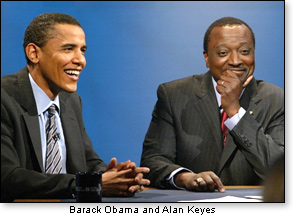 During the Lincoln-Douglas debates of 1856, the nation was treated to a debate between two great masters of rhetoric. Subsequently, there was a drought of good political speakers for a while. Then the two Roosevelts emerged from the heritage of the old Dutch landed aristocracy of the Hudson River to give the country lessons in political rhetoric. But like Churchill and MacArthur, the Roosevelts were Victorian throwbacks. They were the last great exemplars of their breed.

As the Irish ascended to national political prominence in the twentieth century, it was clear that they had the gift of the gab. In election contests, the WASP old guard seemed strangely mute, stiff, and dull in comparison with the eloquent, colorful, and boisterous Irish politicians. James Michael "Boss" Curley of Boston, John Francis "Honey Fitz" Fitzgerald of Boston, and Al "Happy Warrior" Smith of New York were outstanding examples. President Kennedy emerged from Boston's Irish political heritage of Honey Fitz. Ronald Reagan may be the last of the great exemplars of the Irish spellbinders.

After Reagan, a general cultural decay, a literary decay, a popular decline in reading, and a waning of quality conversation has resulted in a shocking inarticulateness of the average American. Ordinary Civil War solders wrote and spoke more articulately, clearly, and elegantly than our college professors do today. Fortunately, a rich oral and preaching culture has been preserved by African-Americans, and to them we now turn to fill the ranks vacated by the vanishing American orator.

The match between Keyes and Obama reminds me of the memorable Ali-Frazier boxing matches. Ali is, of course, a metaphor for Keyes. Ali, a man of superior gifts, training, and skills had a substantial advantage in hand speed, foot speed, reflexes, hand-eye coordination, and intelligent tactics. He had an in-your-face certainty of his own superiority which defied opposition. Frazier is one of the personally toughest among the tough boxers I have seen. The man does not seem to get tired and refuses to fall down though he absorbs a hundred punches to the head. He is the best defensive boxer I have ever seen. His strange combination of ducking, twisting, weaving, and lurching and his odd arm positions enable him to finesse a flurry of punches and sneak in a good counter punch or two.

Keyes was the man with the superior mind. On every issue, he found an original and intelligent way of inspecting it. He started by identifying the core problem that underlies a complex issue. He explained how the issue was misperceived by his opponent. He explained how his governmental experience uniquely equipped him to understand the situation. And he showed the way towards the solution. Amazingly, he was ably to do all this very quickly. He performed this feat for almost every issue. 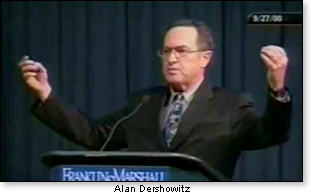 Facing Keyes in debate is like facing Ali in the ring. Alan Dershowitz, a celebrity lawyer, and master mauler of the debate circuit, made the mistake of his life when he agreed to debate Keyes on television. As Ali destroyed the immensely powerful George Foreman, Keyes destroyed the formidable Alan Dershowitz.

Obama was noticeably unoriginal in his approach. Most of his lines were familiar. He borrowed from the Kerry campaign, from liberal pundits, and from local pols. This meant ordinary listeners knew what he was saying because they have heard it before. Many of Keyes' original ideas may have been new to some listeners. Those of limited education may not have been familiar with such a reasoned conservative perspective.

As a Frazier-style defensive fighter, Obama cleverly concealed his liberalism and therefore was able to finesse many of Keyes' jabs. He was a resourceful counter- puncher. He had no knockout punch like Frazier, but he came back every time on his feet with retorts to neutralize Keyes' last flurry. Like John Kerry, he was the master of the "me-too but one more" rejoinder. When Keyes made a strong point, Obama would agree but would add something Keyes had not mentioned, or explain how his way to do the same thing was better. It was like Frazier adapting and blending into Ali's fight and being alert for ways to go one better. Duck, parry, and slip in a jab to the gut.

Keyes was much quicker and more effective with the jabs. It was like Ali's blinding hand speed. Keyes threw far more good zingers than did Obama. Keyes was so fast and so erudite, however, that some in the viewing audience may have misjudged his remarkable accuracy. Similarly, many of Ali's punches were not scored by the judges because his fists moved so fast that the punches were not readily visible. One sometimes had to watch Frazier's reaction to judge if he had been hit. But Frazier was too tough to show much of a reaction. Obama suffered many hits and came back cool — until the end of the debate, when he was flustered and bungled what he had intended to be a powerful cheap shot. Interestingly, it was abortion where Obama stumbled. Keyes stripped away Obama's fig leaf on abortion. Obama had a diabolically clever counterattack waiting, but gave it in a faltering manner.

Obama has a great radio voice. He talks calmly and almost comfortingly into the microphone. He speaks in measured tones in a clear rich baritone voice at a slow enough pace that everyone can understand him. This is an important advantage in debate. That, plus Obama's defensive tactics, his toughness, and his cool prevented Keyes from scoring a knockout. Keyes had to win this one on points. Unfortunately, it requires astute judges for a fighter win on points. The liberal Illinois pundits are anything but astute — and anything but fair to an intelligent conservative. Only a limited number of listeners are astute and alert enough to credit Keyes with the blows he scored. However, Keyes' victory is this: most listeners must now understand that Keyes is the more intelligent, the more talented, and the more morally committed of the two, and has a better preparation in government service. 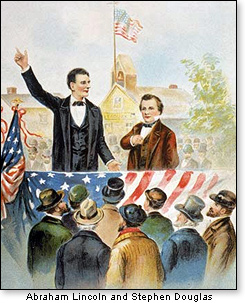 The Keyes-Obama debate had one interesting parallel to the Lincoln-Douglas debates, aside from the fact that they were both Senate races in Illinois and both were a duel between star debaters.

Lincoln argued against allowing states newly admitted to the union to be slave states. Douglas argued for "popular sovereignty," meaning that the people of each state should decide whether to be slave or free. Douglas was "pro-choice" regarding slavery.

Obama is pro-choice regarding abortion. Obama fudged the issue by saying "although I am personally against abortion, I cannot impose my beliefs upon a woman who has the right to choose."

In the same way, Douglas said that he could impose his personal views of slavery on the voters of Kansas. The self-serving tactic was designed to please one side without offending the other. Obama and Douglas pandered to their political base: in Obama's case, the pro-abortion Democrats, and in Douglas' case, the pro-slavery Democrats.

In the midst of this blatant pandering, both Douglas and Obama tried to hide from responsibility. "Although I am personally opposed to it, I cannot impose my personal beliefs...etc." The only cure for this wretched pandering and hiding from responsibility is for someone like Lincoln or Keyes to come along and snatch the fig leaf away.