Defense of marriage and the defense of civilization

Marriage is the indispensable foundation and building block of our culture.

We are in the midst of a hideous culture war. Traditional marriage and the family are under siege. The defense of marriage is on the front line of the war to defend civilization. I am thinking here of "civilization" in the Western sense involving a sane balance between freedom and order and a benign cultural balance between the manly virtues of strength, purpose, initiative, and steadfastness and feminine versatility, gentleness, cultural awareness, community spirit, and cultivation of the home. When the delicate harmony between these two sets of traits is lost, civilization collapses.

Chaste long-term commitment to one partner is the norm in traditional marriage, but it is the exception in the gay community. It is politically incorrect to say this but it is true, and something that must be understood in this debate. When gays say "marriage," they do not necessarily mean the same thing that the rest of us mean by it. In traditional marriage, adultery in intolerable and almost unforgivable. Many gay couples regard their union as an "open relationship." It is like a home base from which they can branch out into other sexual liaisons.

Furthermore, not all gays are interested in quietly minding their own business. We are living in a time of gay activism when gays are proselytizing for the gay lifestyle and gay values. If these "values" seep throughout society, it will have a destabilizing effect on marriage and the family. It is not paranoid to worry about the seepage of perverse gay values. Television, the movies, and the educational establishment are working to present and normalize gay values. They have made incredible progress in persuading many that homosexuality is a valid alternative lifestyle.

Homosexuality involves sexual confusion, a disordering of the gender roles, and the encouragement of sexual perversion and sexual promiscuity. In confuses what it means to be man or woman and simultaneously throws up a wall which prevents a healthy rapprochement of the two. And this, my friend, is a threat to civilization as we have known it. You think not? Let me give you an example of a society in which civilization unraveled.

When homosexuality separates the two genders from the healing reconciliation of marriage, a centrifugal force is unleashed and civilization begins to crack. Demons are unleashed from Pandora's box. Nazi homosexuality is a perfect example of this kind of catastrophe.

The Nazis put some gays in the concentration camps. Estimates of the numbers range widely but 10,000 to 15,000 gays put in camps is sometimes cited. Gay activists sometimes allude to this and unjustly label their opponents as "Nazis." However, homosexuality was always an important stream in the Nazi movement, especially in the early formative days. Check it out in "The Pink Swastika," a book by Scott lively and Kevin Abrams. 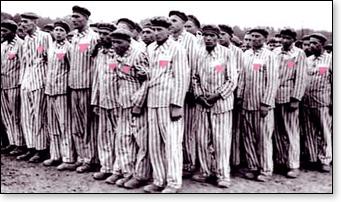 Hitler was never anti-gay. In his youth, he was heavily involved in homosexual activities, even to the extent of being a gay prostitute for a short time. His youthful forays into the gay world brought him into contact with proto-fascist gay groups which would evolve into Nazism. From beginning to end, gays held powerful positions in the Nazi Party and in Hitler's regime. Why then did Hitler sometimes persecute limited numbers of gays? Three reasons: 1) At certain moments, gays were handy political scapegoats along with the Jews; 2) During the "Night of the Long Knives," Hitler eliminated many storm troopers, which were the Nazi military arm. Hitler feared them as rivals for power within the Nazi party. Ernst Roehm, the leader of the storm troopers, had once been the young Hitler's mentor and advocate. Roehm was proud of his homosexuality and many ranking storm troopers were gay. Roehm had employed "butch" (ultramale) gays to kill enemies of the Nazi, because he admired their macho, riotous, aggressive and violent behavior. A disproportionate number of brown shirt bully boys were also butch gay. 3) Nazi "butch" gays regarded themselves as an elite cadre of ultramales or "supermen." Their raging masculinity was unalloyed and undiluted by sexual commerce with femininity. "Butch" macho homosexuality is the fountainhead of misogyny, a contempt for women. The butch gays hated "femme" gays ("fairy" gays in our lingo) because of their effeminate behavior. Often a German butch gay guard in a concentration camp would persecute a German femme gay prisoner. One stream of Nazism involved a perpetual struggle of the butch gays versus the femme gays. Some butch gay Nazis wanted to purge every trace of femininity from their lives and wanted to cleanse the world of the femme gay stain.

A butch gay youth movement existed in Germany prior to the time of Hitler. It had some traits in common with the much later "skin head" Aryan cults. Two iterations of the early German butch gay movement were the "Community of the Special" and the "Rovers," or "Wandering Youth" (Wandervogel). They were devoted to the ideal of the muscular supermale (not unlike our comic book butch superheroes.) They also promoted and praised pederasty if it is a man-boy liaison. They idolized the military heroes of ancient Sparta, Thebes, and Crete.

In the case of Sparta, the elite special forces consisted of units of all-gay super warriors. Sparta deconstructed marriage. The men lived together in barracks, and the state chose the wives for them. Men visited their "wives" for procreation in the darkness and then returned to the barracks. Some did not know what their wives looked like. Sons were separated from mothers as early as possible to get the boys away from feminine influence and begin their military training. Spartan men lived for war and male comradeship. Homosexuality and pederasty were rife. Spartan culture and extreme Nazism have much in common.

Many ordinary men are fascinated, by war but butch gays live for war. They love to display their testosterone rage. That is the source of the brutal Nazi scream. Some Nazi leaders and officers gloried in the idea of war for the sake of war, or perpetual war as a Teutonic cult. They loved Nietzche's "will to power," and his superman (ubermensch), and Schopenhauer's hero as the man of will in a perpetual struggle. They loved Wagner's operas about Norse heros. When the warrior dies in battle with his sword in his hand, the Valkyrie (angel of battles) carries the warrior to Valhalla. All night long in Valhalla, the rowdy warriors sing, drink, and carouse. The next day they eagerly rush out to battle and fight until they are killed again. The Valkyries carry them back to Valhalla for another night of revelry. So the cycle of fighting and feasting repeats many times until Gotterdammerung (the twilight of the gods), when the warriors will be gathered for the last great battle. This is the butch paradise of the pagan Norse and Germanic tribes. The Norsemen were called "berserkers" because during battle they threw themselves into an astounding testosterone rage, and had the uncanny strength of mad men.

Nazism created a world of war that was paradise for butch gays and hell for everyone else. The movie "The Battle of the Bulge" features a German Colonel played by Robert Shaw as is a steely alpha male. His coolness and understated contempt for a beautiful woman was a hint that he was somewhat of a butch gay. His aide asked him if victory in the battle would mean victory in the war. He said no. "Then it means defeat?" the aide wondered. No again was the answer. Now the aide was baffled. The colonel said that victory in this battle means that the war will go on and on indefinitely, and "that is our victory." War is our life, our glory, our victory. Let it go on forever.

This Nazi madness is not exotic. It is the most common phenomenon in the world. Every macho/criminal teen gang is a little band of Nazis running wild on the streets. They have driven themselves crazy with testosterone rage and live for fighting and domination. They are creatures who have emerged from broken homes or from single working mothers and inhabit a world where sexual restraint and fidelity are rare. It is a world where the feminine principle is smashed and despised. It is a picture of what our society might look like if traditional marriage fails. Spartan culture anyone? Hitler Youth? And all the fourteen-year-old boys cried hooray! 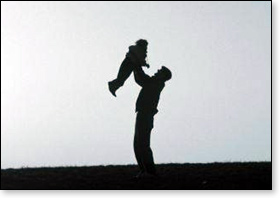 Marriage the protector and the civilizer

One of the divine designs of marriage is to domesticate and humanize the male so that he will become the provider, protector, teacher, and leader of his family. He protects his women and children from the rage of uncivilized men. Marriage holds man and woman together in union so that neither the masculine aggressive impulse, nor the sensitive indecision of the feminine, goes unchecked. Children view a dynamic balance of the two held together in creative tension by the mystery of love. Children are given bold challenges by a father and protective coddling and nesting by a mother. A boy has a model of a man and a girl has a model of a woman. Both have a model of love and marriage.

What about a boy adopted by two lesbians? The boy is subjected to double smothering and double mollycoddling. I can think of no more wretched fate for a boy. If I were a boy in this predicament I would run away and join the circus. What about a girl with two mommies? Sounds like a training program for co-dependence, a passive-aggressive disorder, and terminal dithering. What about a girl adopted by two gay men trying to figure out how to play mother to a girl? I can think of nothing more comical and neurotic. Hope the girl has a sense of humor. What about a boy with two daddies? Sounds like a butch Nazi in the making. Keep that happy hellion away from me. Gay households simply do not work for kids.

Children growing up in a home with parents in a traditional marriage are being prepared for civilized life. They have the right mix of masculine determination and grit and feminine tact and sociability to work themselves into that role they will play in the adult world. And they are prepared to meet that mate of the opposite gender who will help them become complete as a human being: a completed man with a wife and a completed woman with a husband.