That's what families are for 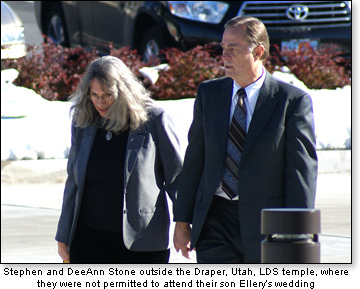 It's barely been a week since our son Ellery got married and our family was again barred from attending a wedding of one of our children.

Does that sound like something rational people would accept?

The reason our family was barred from Ellery's wedding was that we refused the LDS church's demands twelve years ago to quit our work for Alan Keyes, for whom we served as national staffers, and church leaders have persecuted us ever since.

The ridiculous ordeal began when our family's local "Mormon" bishop and stake president decided for us that we needed to drop our association with Dr. Keyes and find  in their words  "meaningful" employment.

When told this, we were being paid more for our influential work for Dr. Keyes than any previous employment — including my work at LDS church-owned Brigham Young University, where I taught English in the late 70's and early 80's. Following that employment with the church, I and my family spent fifteen years pursuing a series of entrepreneurial endeavors — including raising pigs, running a private school, developing income property, performing wedding music, doing private editing and tutoring, and seeking other independent-minded versions of the "American Dream" — before being offered an opportunity with the Keyes organization that enabled our entire family to pool our talents in a way no other opportunity ever had, and in a righteous cause, to boot!

We're still at it after all these years, and we've never looked back. We're now completely out of debt; we recently moved into a passive solar home we built entirely ourselves (we did, in fact, "build that" — with God's providential help — on a ten-acre farm we acquired 25 years ago); and we still work in association with Alan Keyes. 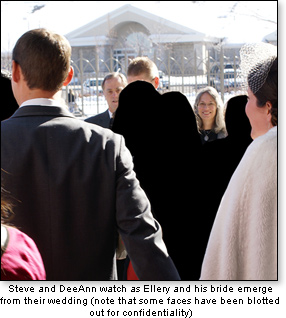 We were told by LDS officials in August 2000 to abandon this well-suited opportunity and "seek meaningful employment." Because we steadfastly refused, church officials — with express approval from the highest levels of the church — have persecuted our family without respite, including barring us from two previous weddings of our children before Ellery's.

As a result of such persecution, our family's livelihood and political activism have suffered nonstop distraction and intrusion, continuing to this day. It's cost us thousands of hours of productivity, due not just to the abusive interference itself, but to our time-consuming efforts petitioning for relief, involving seemingly endless requests and hundreds of documents  all to no avail.

At one point, I was disfellowshipped — a very serious punitive action — specifically for my refusal to quit working for Dr. Keyes (as a letter I received from our stake president clearly verified), and it took me fifteen months of literal hell to get this malicious punishment for "disobedience" thrown out by the church's presiding "First Presidency" for lack of grounds.

Later, in 2009, a new stake president who was prejudiced by his predecessor, aided and abetted by a new bishop who committed perjury against me, excommunicated me for my earnest efforts to attend the second of the two earlier weddings, a retaliatory action that stripped me of salvation (according to Mormon teachings) even though I was accused of no definable transgression. 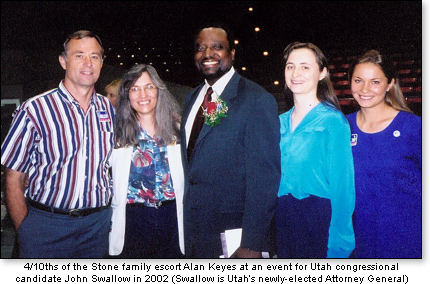 Because excommunication is meant to be a family affair, creating hardship for all connected with the one shunned, our family has suffered indescribable magnification of already-deeply disturbing persecution at the hands of church officials and members alike.

Just after this senseless action happened, a former counselor in our local "bishopric" who had long been aware of our family's plight told me that those who had a hand in my wrongful excommunication "have hell to pay" for what they did to us — because it was utterly baseless and done in clear violation of church statutes and doctrine.

That would include the church's ruling First Presidency, who condoned this latest action, and a number of church bureaucrats who similarly refused our family's repeated requests for relief from the mistreatment we've suffered endlessly, including violations by the church of federal and state law.

All this has been unnecessary, undertaken without merit, and deliberately intended to intimidate and control me and my family in the context of cult-like Mormon tradition, wherein obedience to doctrinally-illiterate lay leaders is considered the path to salvation. The effects of this intrusion have harmed not only our family and the work of pro-life advocate Alan Keyes — including his 2008 presidential campaign, of which I was CEO — but numerous other political candidates and causes as well, and because of the implications of such unremitting harassment, America's political system itself.

A powerful tax-exempt organization like the LDS church is "absolutely prohibited" from interfering unfairly with the system upon which our representative democracy is based. Because the church has defied such rules, the church has furthered its political interests at the expense of free and open process, and behaved contrary to American principle. 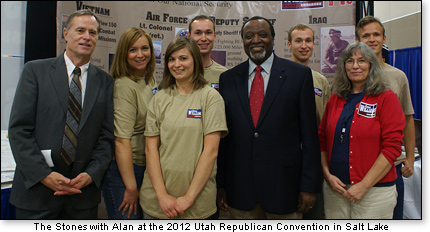 This was evident throughout Mitt Romney's inordinately ambitious political career spanning two decades — heavily funded and facilitated by the LDS church and its membership — culminating in Mitt's predictable loss Nov. 6 for an obvious lack of commitment to moral principle that yielded only lukewarm support from conservatives. This outcome occurred just days before our family's third degrading experience at the marriage of a loved one.

The timing of the two intertwined events was a reminder of the church's un-American behavior toward us.

Is it too far a stretch to suggest that Mitt did not, in God's justice, deserve to win, due not only to his own demerits, but the politically-arrogant behavior of the church that trained and tacitly sponsored him — and which, in our case at least, has refused to play fair? 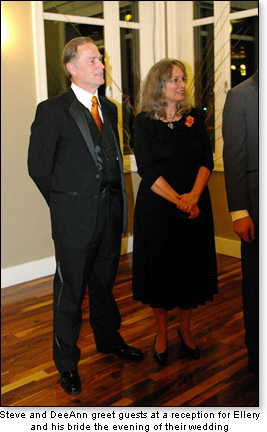 Understandably, our family has a strong opinion about that, having witnessed firsthand the church's sustained mischief.

We think it's time for the LDS church to "come clean," end the mischief, and make things right, as required by scripture. What does the church have to gain by punishing our family for exercising our lawfully-protected political and employment rights, as well as our God-given right of conscience, in abrogation of the church's verifiable laws and doctrines?

The church professes to respect the constitutional law of the United States (see D&C 98:5-12). It therefore has no business interfering with the work of RenewAmerica, or of those connected with it.

We might point out that Utah Sen. Orrin Hatch's political ads this year proclaimed — in the context of Mormon aspirations embodied in Mitt Romney — "It's Utah's time to lead." Perhaps a retrenchment by the LDS church and its membership would be a more appropriate goal.

But if indeed it's Mormon-dominated Utah's "time to lead," that leadership — we suggest — should center in renewing respect, both in and out of the church, for our nation's political system and the divinely-appointed rights of all citizens, as taught by the church's canon. Doing so would go a long way toward establishing the church as a law-abiding, loyally-American institution.

Of course, it would also require the church, itself, to respect such things. In our experience, the church has fallen far short of the decent citizenship required both by law and its own public assurances.

Intrigued by all this? Read more about what has happened to the Stone family at the hands of the LDS church, and why, in A Mormon Story, excerpted here.

Mormons morphing Boy Scouts into 'Girl Scouts'?
STEPHEN STONE, RA PRESIDENT — As the gay agenda rolls forth unchecked in fulfillment of its published goals and tactics — dragging Western Civilization down more predictably than the Muslim Brotherhood is likely ever to do — rational Americans need to come to grips with one of the most damnable frauds in the world's history: the belief that there is such a thing as "being gay."... (more)
Spiritual murder: allegations of wrongdoing by the LDS church

In the world, but not of it: Why not just pull up stakes?

A closer look at Mitt's Mormonism

The real problem with Mormonism

Our premises as we examine Mormonism

Alms for the poor...