As the legislative effort to defund and derail Obamacare continues to gain momentum among grassroots Americans, your senators and congressmen need to hear from you. They need to know you don't want them to fund Obamacare!

Tell your elected representatives to stop this disastrous healthcare program by excluding the measure from the upcoming "Continuing Resolution" slated to be voted on by Congress before the end of the month. 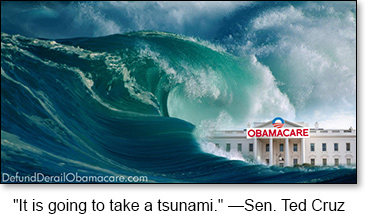 Sen. Ted Cruz, Sen. Mike Lee, Rep. Tom Graves, and others in Congress are pressing for this solution – one that would guarantee the essential services of government but exclude any funding for Obamacare. This legislative action is our nation's LAST CHANCE to prevent the president's enslaving healthcare plan from taking effect when it mandates your enrollment on Oct 1.

Make your voice heard! One of the best ways you can do this is to FAX YOUR REPRESENTATIVES the carefully-crafted petition posted at DefundDerailObamacare.com.

The site's unique FAX FEATURE enables you to send a hard copy of its petition to all 535 congressmen and senators for a modest donation. Doing so can be highly effective.

As you consider this option, keep in mind that claims by Democrat and Republican leaders alike that conservatives who insist on defunding Obamacare are threatening to "shut down the government" are demonstrably false. If President Obama chooses to shut down the government rather than accept a Continuing Resolution that omits funding for Obamacare, he alone will be responsible for that decision – not opponents of his devastating and destructive "Patient Protection and Affordable Care Act."

It's his choice, and his consequence – not the choice or consequence of senators and congressmen who are pressing for defunding.

Since time is short, your elected representatives and senators NEED TO HEAR FROM YOU NOW!

As Sen. Ted Cruz said a few weeks ago on CNN, "Now is the single best time to stop Obamacare. If it doesn't happen now, it's never going to happen."