The Utah Democratic Party, with help from local and national media, is seeking to prevent President Trump's re-election, as well as the election of Burgess Owens to Congress, through fear tactics that center in an imaginary “Trump plan” to restart nuclear testing in the Western United States.

With weeks to go before the election, the Utah State Democratic Committee sent out at least two misleading mailers that warn Utah voters that President Trump intends to resume nuclear testing that could cause “downwinders” in Utah and surrounding states to suffer cancer and other serious harm like that suffered by thousands during the Cold War.

Both mailers claim—in alarming language—not only that Trump is planning to “resume nuclear testing” in the near future, but that Burgess Owens, the Republican challenger of Democrat Congressman Ben McAdams in Utah's 4th District, “absolutely” supports Trump’s plan.

(To appreciate the threat Owens poses to the Dems, see his talk at the Republican National Convention, Aug. 26.) 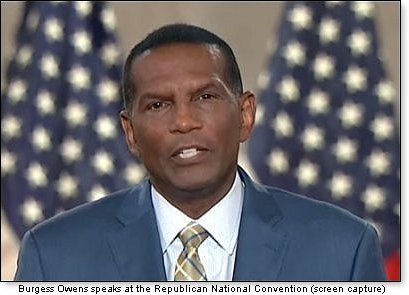 For heightened effect, the latest mailer features a color photo of a large dust cloud from an underground nuclear explosion with Burgess Owens superimposed on the right bottom corner—loosely reminiscent of the famous “Daisy Girl” TV ad that ensured Republican Barry Goldwater’s loss to LBJ in 1964 and sent fear reverberating across America.

The “evidence” of Trump’s “plan”

The exaggerated portrayal of Trump’s intentions stems from a May 22 article in the Washington Post that claimed—citing unnamed sources—that “senior officials representing top national security agencies” met May 15 as a result of unverified reports that Russia and China were “conducting low-yield nuclear tests.”

According to the article, the purpose of the meeting was to discuss the idea “that demonstrating to Moscow and Beijing that the United States could ‘rapid test’ [a nuclear weapon] could prove useful from a negotiating standpoint as Washington seeks a trilateral deal to regulate the arsenals of the biggest nuclear powers.”

Exactly what “rapid test” meant in the context was not addressed by the article. But the article emphasized that—

The meeting did not conclude with any agreement to conduct a test, but a senior administration official said the proposal is "very much an ongoing conversation." Another person familiar with the meeting, however, said a decision was ultimately made to take OTHER MEASURES in response to threats posed by Russia and China and AVOID A RESUMPTION OF TESTING. (Capitalization and italics added)

Interestingly, the article makes no mention of Trump, himself—either as involved in the meeting or as having a personal plan about the subject of testing. It certainly doesn’t indicate he personally has any interest in resuming testing.

Yet this one article has been repeatedly cited by the media and their fellow activists in the Democratic Party as evidence that Trump intends to resume controversial nuclear weapons testing.

In big, bold letters, the latest Utah Democratic Party mailer stresses, “The Federal Government Lied To Utahns About the Safety of Nuclear Weapons… They said it was safe when they knew it wasn’t.” The mailer then urges voters, “Don’t Let Burgess Owens Do It Again”: 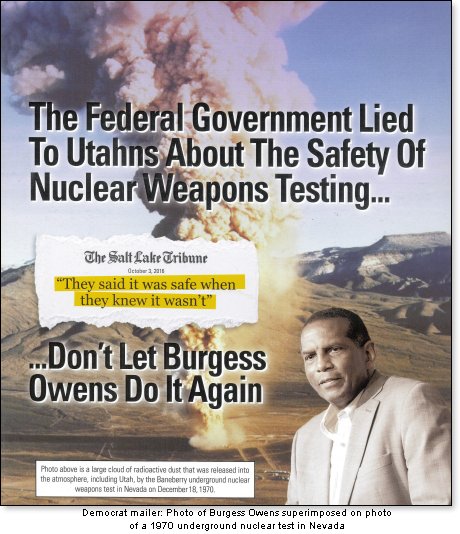 The evidence that Owens is a dangerous threat to Utah as the mailer amusingly claims?

Just this: The sole fact that he said “absolutely,” when a June 29 caller on K-Talk radio asked him if—after he’s elected—he will “support Trump’s effort to resume testing here in Utah.” Note that he was not asked if he supports a resumption of nuclear testing in Utah (although the caller used that term in his pre-question lead-up, which focused on the commendable things Trump has done to strengthen America’s military and reverse Obama's weakening of our national defense and foreign policy). Because he supports “everything President Trump is doing in the [international] arena,” Owens said, he answered affirmatively, saying Ronald Reagan emphasized the need for “peace through strength.”

After the show, the Owens campaign issued a clarifying statement,

As recent discussions of nuclear testing have come up, Burgess Owens remains committed against the testing of nuclear options…. Burgess has expressed a desire to understand the president's meaning of “nuclear testing” and has no reason to believe he has suggested anything similar to the testing done in the past. (Deseret News, July 16, 2020, emphasis added)

This clarification from Owens should end the controversy. It indicates (1) he is opposed to any resumption of nuclear weapons testing similar to that done in the past—despite what Democrats have falsely claimed; and (2) his one-word statement, “Absolutely,” means nothing without inclusion of words that make clear precisely what he meant. Adding the word “nuclear” to a paraphrase of what he meant, for instance—as Utah’s Deseret News did in reporting it, when he himself did not use the word—would alter and distort Owens' intent.

Yet that is exactly what the Deseret News did, because the caller used the term “nuclear” in his pre-question lead-in.

Surprisingly, the Deseret News labeled Owens’ clarification a “seemingly contradictory statement”—since it contradicted the News’s embellishment of his response to the K-Talk caller. The paper’s embellished paraphrase has continued to perpetuate the false idea that Owens supports a resumption of “nuclear” testing in or near Utah, even though he is on record as officially opposing it.

The effect of this misreporting is reflected in McAdams’ campaign manager’s statement that “I take Burgess Owens at his word. Owens said he ‘absolutely’ supports nuclear weapons testing here in Utah. That his campaign subsequently [issued a clarification] doesn’t change what Burgess said or believes.” (See Deseret News, July 16, 2020, “Nuclear weapons testing still hot topic in Utah on 75th anniversary of atomic bomb,” linked above.) 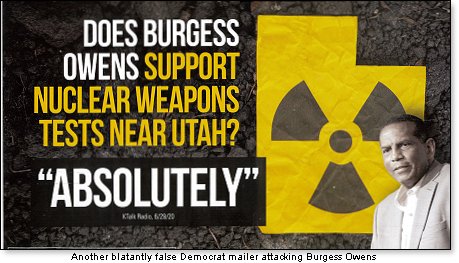 The error-filled Democratic mailers at issue cite a handful of media articles beyond the initial May 22 Washington Post piece to back up their reliance on that piece. These additional sources themselves, however, trace their basis to the original Post article.

A Google search brings up additional local and national articles that likewise rely on the initial Post piece but go beyond the Post in adding more heat than light to the controversy.

Among the most notable:

A perusal of these misleading reports reveals there is no factual basis to claims of Trump’s purported plan to resume nuclear testing, including the May 22 WashPost report that started it all.

This reality was recently underscored by the president himself in an official statement he issued July 16. The statement effectively sets this contrived controversy to rest.

On July 16, the White House released a “Presidential Message on the 75th Anniversary of the Trinity Nuclear Test,” a two-page statement of official Trump administration policy. The second paragraph says,

[During the Cold War,] nuclear testing conducted by the United States laid the groundwork to maintain our stockpile and further our ability to understand and prevent nuclear threats around the world. Since 1992, we have observed a moratorium on such testing and have relied on the scientific and technological expertise of our weapons complex to ensure our deterrent is safe, secure, and effective. True to our word, we maintain our moratorium…. (Emphasis added)

In paragraph four, Trump emphasizes that “[i]n order to continue protecting America’s vital security interests, I have directed my Administration to revitalize and modernize America’s nuclear security complex to preserve a credible deterrent.” 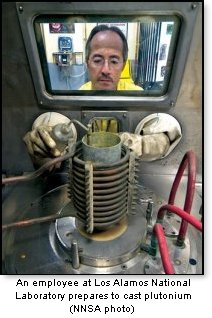 “We are [therefore] investing in the capability to produce plutonium pits to support our stockpile needs and to improve the infrastructure of the weapons ecosystem.”

The meaning of this strategic purpose is made clear by a little Googling. According to the website of the National Nuclear Security Administration, “plutonium pits” are a “key component for nuclear weapons.” They “about the size of a bowling ball” and evidently need to be replaced and updated periodically.

The website of the Los Alamos National Laboratory in New Mexico, where plutonium pits are produced and thereafter kept reliable, sheds further light on the highly specialized subject of nuclear deterrence. The purpose of the Laboratory, according to its website, is “to solve national security challenges through scientific excellence.”

The nation’s investment in the advanced scientific experimental, engineering, and computational capabilities at Los Alamos allows the Laboratory to confidently extend the service life of the nation’s nuclear deterrent without resorting to full-scale underground testing. (Emphasis added)

Understandably, the president’s July 16 message on the anniversary of America’s first nuclear explosion makes no mention of any need to resume nuclear testing, since our nation’s nuclear deterrent has long been successfully maintained and upgraded without doing so. 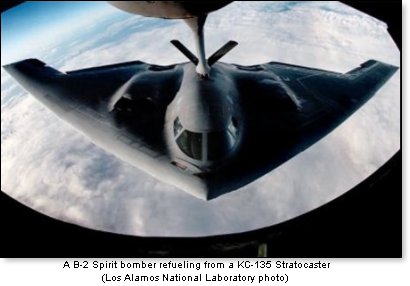 Even expanding America’s nuclear arsenal can therefore be done without the need to detonate nuclear weapons—by building new and better delivery systems (missiles, ships, submarines, planes, etc.) to deliver already proven technology. New nuclear testing would thus be unnecessary to keep pressure on the Russians or the Chinese.

In a word, the media’s (and the Democrats’) hysteria over a nonexistent plan to resume nuclear testing is simply ignorant of current needs and practices.

In view of these facts, there is no reason for the media or the Democrats to frighten voters over an imaginary threat to their safety, other than to unfairly damage the electoral chances of President Trump and Burgess Owens through specious lies—undermining our electoral system itself. In that case, the Washington Post’s well-known slogan would seem to apply: “Democracy dies in darkness.”

A litany of other dirty tricks

The Democrats are engaged in other outlandish dirty tricks to derail Burgess Owens’ candidacy. These all involve slandering a good man’s character, in ways shamefully dishonest.

Observers have surmised that the attacks are designed to draw attention away from Ben McAdams’ liberal record in highly conservative Utah. The attacks appear in mailings, as well as online ads.

You can read about these unfair attacks in a moving opinion piece by Owens in the Deseret News—and also by visiting Owens’ website.

And be sure to view his inspiring speech on Day 3 of the Republican National Convention (as well as his remarkable interview with Candace Owens recorded three days before he launched his campaign).

Stephen Stone is a Utah-based political activist and the President of RenewAmerica.


Permission is granted to repost or republish this article with appropriate attribution.