The fact is, the "grassroots" is not like anything else in politics. By its very nature, it's fiercely resistant to central control — yet it can be incomparably loyal and self-sacrificing. Properly understood and respected (and hence properly utilized), it has the potential to alter an entire culture. Approached incorrectly, it will turn on those who seek to exploit it.

For these reasons, today's major political movements tend to ignore the grassroots and focus almost exclusively on the use of media to gather winning support at the polls. This works fine as long as the media are susceptible to being courted. But a cause that seriously challenges the media's inherent or conventional tendencies cannot afford to rely alone on media exposure — including paid advertising. Positive gains by unconventional movements can easily be undone by the media through its powerful domination of the public mind. Freedom-minded Americans must therefore find ways to MOBILIZE THE GRASSROOTS if they are to have any hope of making enduring improvements to American society.

By definition, the grassroots is the bottom of the political pyramid, opposite the "establishment," which controls the top. While the establishment concentrates power in relatively few people in the highest echelons of power — typically party leaders, elected officials, appointed aides or bureaucrats, and others who wield considerable authority over others (and whose business is limiting others' choices) — the grassroots includes virtually everyone else, those common people who do not necessarily hold any political office and who may even be getting their first taste of politics in a particular cause.

It is important to understand, however, that the above model is overly simplified. The grassroots and the establishment can often be the same. People can function simultaneously in either realm, and many often do. In fact, a large proportion of grassroots activists are current office holders or party leaders who are deeply engaged, alongside common citizens, in what could only be described as grassroots activism — involving them in cooperative, advisory, or leadership roles with people of the lower echelons. At the same time, many at the grassroots are inseparable in the public mind from the highest levels of political power, because of their effectiveness in influencing elected officials to change public policy. 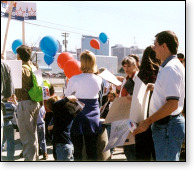 What this means is that, ultimately, "the grassroots" is an ATTITUDE. It is an attitude of freedom, of creativity, of unrestrained political enthusiasm, of willingness to band together with ordinary citizens for a common purpose. It has nothing inherently to do with holding a position. It is what some political leaders do outside or beyond their official duties when they get involved in popular causes. It is what regular people do politically alongside others of like minds, without undue concern for conventional roles or authority.

The grassroots is the very essence of politics. It is dumping tea in a harbor, or standing up and testifying at a local city council meeting, or taking a political candidate aside after a rally and giving him or her some advice, or handing out leaflets at a mall. It is that whole realm of politics beyond official station, although many of high station moonlight as grassroots activists — some unintentionally, by their willingness to rub shoulders with the citizenry.

Motivated grassroots activists can be counted on to carry the burden for any particular political cause. They will make phone calls, label envelopes, knock on doors, organize their friends and relatives, e-mail everybody on their lists, march in the streets, put up yard signs, attend rallies, volunteer for leadership, write letters to editors, lobby VIP's, distribute petitions, donate money, and in countless other ways make great personal sacrifice for what they believe in.

They do these things because of their belief in the ideals that define what it means to be an American. Nearly all true grassroots activists in our nation — unlike establishment authorities who control the political process (including those in academia and the media) — are thus FUNDAMENTALLY CONSERVATIVE. They are at least believers in the sanctity of American's founding ideals and are inclined to support the causes of economic liberty, natural law, and moral responsibility. They are rock-solid, sincere Americans.

And there are literally millions who fit this description. Given the right conditions, they will perform yeoman work indispensable to the success of any major political movement.

The real grassroots strength of America has never been fully tapped, at least not since our founding, when a large proportion of common citizens rose up and made a difference. Whatever grassroots activity we see today is restricted mainly to those individuals who are the most assertive or outspoken. Millions of others would join these visible activists — in every movement from pro-life to pro-marriage to pro-Second Amendment to pro-property rights — if they knew where to turn for adequate leadership, and if they understood how far America has steadily moved toward the brink of social and political collapse. Unfortunately, the grassroots remain largely dormant, due to the fact that even principled political leaders have never learned to fully inspire the grassroots to meaningful action or enlist their full help.

Again, it is important to stress that virtually all truly grassroots activists are sympathetic to moral conservatism. The lawless radicals we often see on the news holding America hostage are not genuine grassroots. They tend to be avant-garde elitists from academia whose main interest is dismantling America's traditions, in preparation for a world of government-dictated servility. They take their orders from above — not below. They are an extension of top-down plans for disrupting our society, not common Americans who sincerely want to preserve our nation from their position at the bottom of the political spectrum. True grassroots activism springs from ordinary citizens and tends toward principled American liberty, not dependency on increased government power.

That being the case — all those who would like to mobilize the grassroots for a particular purpose must, themselves, embody and follow ideals that are consistent with those of America's founding, or the grassroots won't rise to the occasion. This doesn't mean simply rallying citizens to the cause of preserving our nation — although that is essential. It means respecting and exemplifying the very principles that rallied our forebears: treating the grassroots as equals; respecting the grassroots' need for freedom; and recognizing that no one controls the grassroots from the top down.

Below are principles for working with the grassroots, based on the typical behavior of those who join grassroots movements. These principles cannot be divorced from any serious attempt to reclaim America through broad grassroots activism.

These simple principles for organizing grassroots activists will — if followed at least in spirit — unleash the power of the grassroots to accomplish great things in the political arena, on a scale never before seen.

America wasn't built by stifling the individuality of free-thinking idealists. Nor will it be saved by such means. Those who intend to renew American liberty and character need to lead the grassroots to cultural and political dominance on the grassroots' own terms. 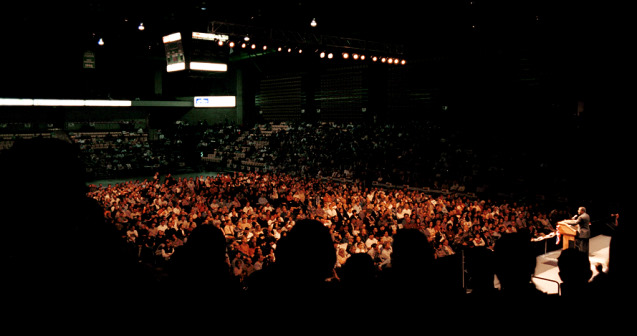 A rally of 5,000 that resulted from the grassroots march depicted in the photos above — video of which was re-played for several days on local TV stations prior to the rally. Both the march and the rally, which occurred in 2000, were staged entirely by a small group of volunteer activists.

Back to Activism page