Corruption of the science establishment: causes and cures

By now, most of my readers have heard of the scandal nicknamed "Climategate," involving the suppression of information that contradicts a supposed consensus of the science establishment about global warming. For ten or fifteen years, we have been told that when scientists have reached a consensus, all further debate should stop.

I have read half a dozen accounts of the Climategate scandal in newspapers and in conservative magazines. Therefore, I do not wish to probe too deeply into the sordid details, but to focus instead upon what went wrong with the science establishment.

The most remarkable part of this strange story is there never was a consensus in the scientific establishment in the first place. Among leading scientists who fervently support global warming, there long have been and are now bitter battles going on concerning the data and the interpretation of the data.

The myth of consensus

In spite of this fact, the myth of consensus regarding global warming has been insistently perpetuated within the science establishment and in the propaganda issued to the public. Why? Why are the scientists lying about having a consensus?

The temptation to cheat

The central thesis of this essay is that when a scientist pursues consensus instead of seeking truth, decay settles into his professional ethics and his intellectual prowess. Interestingly, the same is true of philosophers, theologians, politicians, and those seeking to be good Christians and good citizens. Seeking truth keeps us virtuous and mentally sharp and alert. Truth seekers rarely cheat. Consensus seekers can be tempted to cheat. This is especially true of a science establishment that puts pressure on its members to conform to the prevailing paradigm  which is the position on which they claim to have consensus. The penalties of being a dissenter from the prevailing paradigm might be stiffer than the penalty of being caught cheating.

The philosopher who can't think 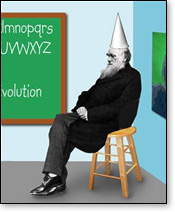 I had an e-mail debate about evolution with a professor emeritus in philosophy who claimed to be an expert in logic  yet he had pursued academic consensus for so many years that he seemed unable to make a single logical statement. He went blank when I used propositional truth. He gave no answers to the facts or logic of any of my criticisms of evolution through random mutations. His sole contribution to the conversation was to count the numbers of scientists who believed in evolution and compare it to the numbers who reject evolution.

Completely lacking in the zeal for truth, he suddenly had a lot of zeal for finding a religious label to assign to me. Why? I was dissenting from the consensus of the establishment. Due to his dulled intellectual capacities, he could find no way to protect the establishment consensus against my attacks except to write me off as a dissenter driven by religious faith. That saved him the trouble of thinking  and from bothering about my arguments. Scientists who never have to answer criticism soon become intellectually sloppy, and in time their reasoning skills turn to mush  as happened to this poor professor who was loaded with academic credentials.

The religion dodge is one version of discrediting opponents. Global warming skeptics have been routinely accused of being "against science." This very day, I heard a TV commentator saying that another commentator who was a global warming skeptic was like those who believed in a flat earth and like those who persecuted Galileo. This insult is mindless and effortless. Making intelligent answers is hard work.

Hostility to criticism and consensus-seeking organization

A consensus-seeking organization views a dissenter as an enemy because he disagrees with and challenges the consensus. The loyal members of such organizations work together to suppress dissent.

Every truth seeker remembers with gratitude times he was challenged and set right, and thereby brought closer to the truth.

Peer review and the scientific method

The founders of the scientific method were seekers of truth, and they designed "peer review journals" for scientific papers in order that the papers could be published and subjected to public review and criticism. As a result, a public debate about disputed facts, theories, and mathematics could be had. Scientists got very smart and very careful because every time they published a paper, they prepared to publicly defend it against intelligent and knowledgeable critics, and to devote considerable intellectual energy to the ensuing debate.

The Climategate scandal revealed that the global warming establishment subverted the peer review process by blackballing those peer review journals that publish papers that dissented from global warming. In some fields of research, all the peer review journals are controlled by consensus seekers, and these journals refuse to publish dissenters. Their next trick is to turn right around and say that the dissenters are not real scientists because they are not published in the journals  i.e., we won't let you publish, and therefore you are not a real scientist, because you have not published. That is why we don't have to listen to your criticisms.

After writing essays critical of Einstein, I was challenged by a physicist from M.I.T. who is a self-appointed defender of Einstein. Einstein is virtually worshipped by the science establishment. Therefore, many scientists will go to any end to support him  by fishy means or foul. In my paper, titled "Einstein's Potemkin Villages," I explained how Einstein's gravity is much too weak to explain the movement of galaxies. It is downright feeble. Twenty-five times more matter than what seems to be out there must exist to make Einstein's math work for the movement of galaxies.

A seeker of truth in this situation would say, "Throw out Einstein, because the facts are against him!" In contrast, Einstein worshipers invent facts to make Einstein's math work! They've invented enough "dark matter"  an imaginary substance  in the amounts needed to make the math work. Einstein's math works just fine if you cheat with plug figures and invent imaginary entities.

"String theory" involves the invention of imaginary alternate dimensions and alternate worlds to vindicate Einstein's claim that the microscopic realm is harmoniously interconnected with matter that is great enough in mass so you can measure its weight and velocity.

Fantasy science can only occur when there is a lot of mind rot. The M.I.T. professor I debated had a serious case of it. He did not understand the core principles of Einstein's theories. Einstein said that every scientific theory should be reducible to a simple concept that a child can understand. I understood these childlike principles. My challenger from M.I.T. did not. I repeatedly said to him, "Your argument contradicts Einstein's principles  and I had to explain the principle as to a child. Such was his intellectual laziness, he did not bother to understand the core principles of his own field. He worships Einstein without understanding Einstein. Such is the kind of mind rot that will tolerate the creation of imaginary matter and imaginary worlds and dimensions in order to celebrate a god of science like Einstein.

The politicization of science

Some conservatives claim that climate science has been politicized to serve left-wing causes.

Some years ago, I was offered a job as the leader of a team to evaluate state agencies. The sticking point was I was required to use consensus management with my team. I was well qualified and prepared for this task. However, some of my teammates were not  but each of their voices was to have equal weight with mine, even though I was supposed to be the "leader." The leader of such a team must use most of his time negotiating for consensus instead of concentrating upon the job. In other words, the job was completely politicized. I was a good evaluator and analyst, but I realized that I am no politician. The agency director was eager to hire me. She was dumbfounded when I refused the job, solely based upon my objection to consensus management. Almost my exact words to her were, "If I am a pilot and am offered a plane to fly, I must decline the honor of flying the plane if I'm certain the plane will crash."

Seeking consensus and landing in heresy

For the Christian, the best way to avoid delusion and heresy is to read the Bible and seek the truth. "Because they received not the love of the truth...God shall send them strong delusion that they should believe a lie" (Thessalonians 7:10). The so-called emerging church does not seek truth in determining what to believe. They seek consensus and determine what to believe through consensus. This consensus-seeking is done on a church-by-church basis. Truth seekers who dissent from the consensus of the local church are usually thrown out. This is why the emerging church has become infamous as propagators of heresy, as well as of extremely peculiar ideas and practices.