Multimillionaire real estate developer Carl Paladino, co-chair of Donald Trump's New York campaign and Republican candidate for governor of New York in 2010, sent an email to Republican delegate Stefani Williams threatening her for an open letter she wrote calling for "freeing the delegates" to the Republican National Convention.

You should be hung for treason Stefani. There will not be a Republican Party if you attempt to replace Trump. I'll be in your face in Cleveland.
In her open letter – posted at RenewAmerica and The Hill – Williams argues that Trump is unfit to be president, and that fellow GOP delegates should stand up to party elitists who want to bind them to support Trump in violation of their God-given right of conscience.

The opinion piece notes that every convention in the history of the Republican Party has respected such fundamental right of conscience, with the exception of the 1976 convention, which "bound" the delegates to support Gerald Ford and deny Ronald Reagan the nomination, leading to the disastrous election of Jimmy Carter.

Williams told RenewAmerica, "The message sounded like it came from a mobster," and added, "This is just more evidence that the Trump campaign relies on bullying tactics and inspires violence. It's just more 'dirty tricks' from a campaign that doesn't play fair – something my article documents."

Reportedly, Paladino has also bullied other delegates who support a conscience vote at the GOP convention, warning them "there's going to be a war" if they continue. He said, "I'd certainly whack them if they went off the reservation." ("Whack" is often construed to mean kill, in mob jargon. In the context, it's clearly meant to suggest some measure of violence.) Recently, a fellow delegate Williams has worked with received a threatening email from Paladino telling her "Your treacherous goal will not be forgotten."

Remarkably, these are the words of a member of the convention's Credentials Committee, on which Paladino sits in judgment of other delegates' right to participate. 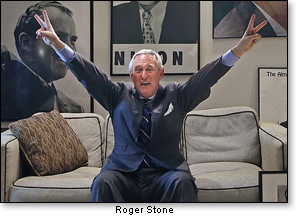 According to Paladino's bio at Wikipedia, Paladino is a 30-year Democrat who turned Republican in 2005. He is associated with longtime Trump confidant (and infamous "dirty trickster") Roger Stone, who advised Paladino during his 2010 run for New York governor.

In that election, Stone also ran the "novelty" gubernatorial campaign of Kristin M. Davis, aka the Manhattan Madam, a prostitute connected with former New York governor Eliot Spitzer. This conflict of interest prevented Stone from simultaneously running the campaign of Paladino, whom he favored in the race. On Stone's advice, Paladino hired former Stone employee Michael Caputo as his campaign manager.

Paladino's affiliation with Roger Stone suggests the developer's message to Stefani Williams and other delegates may have been inspired by the in-your-face methods of Stone, who has been at the center of Trump's political aspirations over the years.

At Paladino's website, a video clip refers to Paladino as a "Trump surrogate" – meaning he's authorized to speak for Trump, who himself has been repeatedly accused of inciting violence, threatening opponents, and employing dirty tricks throughout the election. Such heavy-handed, shameless politics as we continually see in the Trump campaign – and the corruption of American culture it both feeds and feeds off of – is pulling America downward, despite Trump's brash assurances to the contrary.

Republican delegate Stefani Williams, we should note, has been active for years in grassroots causes at the local and national levels.

From one GOP delegate to another: Vote your conscience – Stefani Williams (The Hill)