The meaning of big government 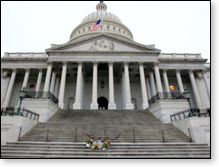 Ever since the 2010 elections, with the prominent role of the Tea Party, there has been much discussion about big, centralized government.

Conservatives, libertarians, and Tea Party activists argue that America has drifted too far from the constitutional principle of limited government — that the federal government is becoming too big, too powerful, with an unlimited scope of authority.

Indeed, the phrase "big government" is now more than ever a pejorative in the American lexicon. Yet polls suggest that the public, though disliking the phrase, does not have a clear, tangible idea as to what exactly is so bad about big government. Two examples may provide an answer.

Creating chaos in the housing market

In their recently released book Reckless Endangerment, Gretchen Morgenson and Joshua Rosner reveal how Fannie Mae contributed to the financial crisis of 2008. Fannie Mae, a nominally private company that effectively operated as a government agency, used its government-granted monopoly to dominate the mortgage market and become the nation's second-largest debt issuer — second only to the U.S. Treasury.

Pushed by government officials, who in turn perpetuated its monopoly privileges, Fannie Mae violated traditional standards of underwriting, building up illusory profits in the process by issuing mortgages to people and households with insufficient assets. This was all done pursuant to a political agenda of increasing home ownership by the poor and minorities, but it ended up causing a financial debacle costing hundreds of billions of dollars, not to mention the harm caused to all the families who later defaulted on their mortgages and had their homes foreclosed.

Fannie Mae was able to engage in such reckless lending because of its government backing, which helped drive out competitors while at the same time insulating Fannie Mae from any bank-style regulation. This government backing was possible because the federal government had spread its tentacles into both the individual home-buying and mortgage-issuing sectors of the economy.

The second example involves the federal healthcare reform bill enacted last year. The unprecedented size and scope of this bill, touching every facet of an individual's healthcare decisions, has been well documented. But one of the inevitable consequences of huge size and unlimited scope is that the actual working details often get lost amidst that huge size and unlimited scope.

One such aspect of the healthcare law is the creation of a new federal agency called the Independent Payment Advisory Board ("IPAB"). This agency will have broad and pervasive power over healthcare prices in America — and through this power to control prices, the IPAB will effectively be able to ration the delivery of healthcare services to the American public.

As President Obama stated in his April 13 speech responding to Representative Paul Ryan's Medicare proposal, the IPAB's power over Medicare pricing is a key component of the president's own deficit-reduction plan. Unlike Rep. Ryan's plan, which focuses on patient choice to foster competition among medical providers, which in turn will work to lower healthcare costs, the president's only option for achieving cost reductions is to impose massive federal controls over pricing, which will inevitably — if history is any guide — lead to more healthcare rationing by the federal government.

And yet, despite promises that IPAB price controls will cut the Medicare deficit, White House deputy chief of staff Nancy-Ann DeParle admits that IPAB will not bring any cost savings for at least a decade. But the real danger is that if the government-control model is accepted over Ryan's patient-control model, the price controls instituted by a monopolistic IPAB will eventually drive all independent private healthcare insurers out of business, which in turn may lead to the worst scenario of all: increasingly stringent government healthcare rationing coinciding with continually rising federal deficits.

Ironically, in the abortion debate, pro-choice advocates argue that all medical decisions should be left to the doctor-patient relationship. Under the new healthcare reform bill, medical decisions will be dictated by the pricing and regulatory decisions of a federal agency. 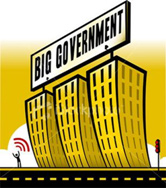 Unbounded bureaucratic discretion and the threat to the rule of law

The nature of big government is that it is almost always justified in terms of lofty, idealistic, even utopian (the-country-will-be-saved) arguments. And the acts of big government are almost always billed as reformist. But as demonstrated by such recent legislation as the healthcare reform act and the Dodd-Frank financial reform bill, these big government programs also provide for unbounded power and discretion by federal bureaucrats.

Take, for instance, the recent attempt by the National Labor Relations Board (NLRB) to prevent, as an "unfair labor practice," Boeing's decision to build a production facility in South Carolina — which is a right-to-work state — instead of expanding existing facilities in the state of Washington, which is a closed-shop state. If the NLRB can act with such arbitrary and unbounded punitive discretion regarding a law-abiding corporation the size of Boeing, imagine what government agencies can do regarding individuals and small businesses.

The Framers, in drafting a constitution giving only limited power to the federal government, knew that a host of problems and liberty deprivations would occur with a centralized government of near unlimited activity and authority, including a lack of transparency and accountability, and the imposition by federal bureaucrats of uniform mandates on a large and diverse society.

There is also a rule-of-law problem posed by a government of vast powers. This problem is similarly illustrated by the healthcare reform bill, under which companies and unions are able to apply for waivers from various provisions of the bill. Indeed, the federal government has already granted hundreds of such waivers. But those waivers, by definition, are privileges given to a select few, as determined by the discretion of government officials. Words like "privilege" and "select few" and "discretion" do not go along with any notion of the rule of law.

The danger of big and unlimited government is that, over time, it can distort the most basic notion of sovereignty and principal-agent. Under the U.S. constitutional system, the people are sovereign: they are the principal, with government as their agent and servant. The current debt-ceiling debate demonstrates, unfortunately, how much that relationship has been inverted.

The government is spending too much, and will soon exceed its legally mandated debt limit. Yet those who wish to couple any increase in the debt limit with some kind of spending reduction plan are belittled as reckless ideologues — willing to risk a financial crisis for the sake of their ideological beliefs in limited government. Imagine that: accusing those who wish to require a government that is about to exceed its $14 trillion debt limit to cut spending of being reckless ideologues with no legitimate foundation for their position.

Clearly, we have come to a situation where government has gone beyond its role as agent of the people. It now seems to have an independent existence that in turn must be supported by the people merely for the sake of perpetuating a government that has no limits.