In two decisions announced this week, the Supreme Court's liberal wing shows a curious and seemingly inconsistent stance toward First Amendment freedoms. In Brown v. Entertainment Merchants Association, the wing, with the exception of Justice Breyer, found that a California law requiring minor children to have their parent's consent before purchasing graphically violent video games violated the First Amendment rights of video game manufacturing and distributing corporations. However, in Arizona Freedom Club PAC v. Bennett, the liberal wing voted unanimously that a law giving extra public campaign funds to candidates facing certain privately-funded opponents did not violate the First Amendment rights of those opponents, who were essentially being punished for their success in expressing and promoting their political viewpoints.

A long and unquestioned constitutional history supports the view that political speech occupies the highest rung of First Amendment protections — a view articulated by James Madison in his Report on the Virginia Resolutions and by the Court in the hallmark First Amendment decision of New York Times v. Sullivan. The framers knew that political speech had to be protected for the process of self-government to work and for individuals to possess the power to control government. Gratuitous violence and sexually explicit material contained in media entertainment products, such as the video games subject to the California law, has frequently been recognized as speech of a much lower value to democracy than the type of political speech expressed by political candidates in political campaigns. And yet, according to the Court's liberal wing, graphically violent video games like Grand Theft Auto are more deserving of unqualified constitutional protection than the speech voiced by political candidates. 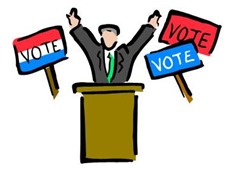 A contradictory and unfounded approach

The Court's liberal wing takes a contradictory and historically unsupported view of the First Amendment free speech clause. While media corporations and Hollywood studios have complete freedom to sell whatever products they desire, political candidates are restricted in their freedom to express and promote their political ideas. While individuals and corporations have a First Amendment "freedom" to profiteer in media pornography and graphic depictions of gratuitous violence, they do not have the same unaltered freedom to challenge the political status quo. One can only imagine how the framers would have reacted to this interpretation of First Amendment freedoms. 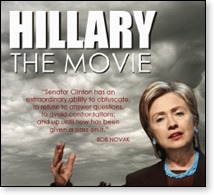 Another irony in the First Amendment views of the Court's liberal wing is that while, as the justices wrote in their Citizens United v. FEC dissent last term, a corporation's political speech activities could be regulated and even banned — e.g., a non-profit corporation's commercial advertising of a documentary film on Hillary Clinton — a corporation could not be regulated in its commercial sales of video games that many sociologists and psychologists had found to promote violent antisocial or aggressive behavior in children.

But the modern liberal distortion of the First Amendment does not just characterize Supreme Court justices, it can also be found in recent actions by the Obama administration. President Obama has proposed an executive order requiring that potential government contractors disclose all political contributions exceeding $5000 before they will be eligible to bid on government contracts. This requirement applies to contributions made by company itself, as well as by the company's officers, directors, and affiliates during a time period of two years preceding any bid for a government contract. It is just the kind of disclosure rule that the Court has previously found could exert undue pressure on the political activities and viewpoints of those subject to the rule. In McIntyre v. Ohio Elections Commission, the Court stated the First Amendment could be violated if a law attacking anonymous speech would result in a chilling of the speaker's free speech rights. As the Court stated, "The interest in having anonymous [speech] enter the marketplace of ideas unquestionably outweighs any public interest in requiring disclosure as a condition of entry." And of course President Obama's disclosure rule will have an inhibiting effect on speech; after all, what company wanting to do business with the government would allow its officer, directors or affiliates to contribute money to the opposition party? 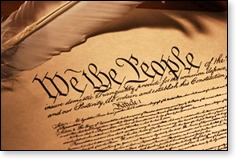 The left's view of the First Amendment

To the Left, the First Amendment in particular and freedom in general seems to have a double-standard effect. On one hand, the First Amendment protects a kind of libertine freedom from any traditional cultural norms concerning public profanity, the distribution of pornography, and the ability to consume any kind of entertainment product dreamed up by media corporations. But on the other hand, the First Amendment does not protect a freedom to enter and engage in the political process to whatever degree the person or group wishes and to compete for political power against the established order.

Perhaps this view of the First Amendment derives from the Left's view of the relationship between the individual and the state. If there is one value or belief that characterizes modern liberalism, it is the expansion of the state's role and authority in society. This value becomes apparent in the current debate over the federal budget. No matter how many experts agree that government spending is unsustainable and that America is headed toward a Greece-like financial meltdown if it doesn't reign in government spending, the Left continues to dig in its heels and resist meaningful spending cuts.

This dedication to the expansion of government in society can also be seen in the Left's reaction to the public sector collective bargaining reform bills recently put forth in Wisconsin and Ohio. Even though these reform bills are attempts to essentially equalize the power and status of private sector and public sector unions, and even though the states are facing huge deficits that would be lessened by passage of the bills, the Left's opposition to them had a vehemence not seen since the Vietnam and Civil Rights eras. This is because the Left needs the public sector unions in its campaign to continue the growth of government in society.

In America today, nearly twice as many people work for the government (22.5 million) than in all of manufacturing (11.5 million). This is almost an exact reversal from 1960, when nearly twice as many people worked in manufacturing than in the governmental sector. More Americans today work for the government than in manufacturing, construction, farming, forestry, fishing, mining and utilities combined, despite an array of studies showing that states and cities could save 20% to 40% of the cost of many services through competitive contracting to provide providers. But public sector unions are a key force in consistently opposing any such efforts, thereby keeping the government big and growing. 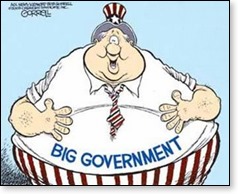 The First Amendment and big government

In a government-defined, government-directed society, the government must set the rules on the really big issues. The individual can engage in the kind of freedom that doesn't confer any lasting power, but the power to limit government or transform its role and activities is a power that a statist society doesn't value.

Increasingly, modern liberalism has adopted a top-down approach to governing: empowering the political elite to direct society through the role of government and mistrusting the average person with the duty of self-government. Similarly, the First Amendment decision of the Court's liberal wing seeks to put the government more firmly in charge of the election process, and hence more firmly in charge of society and of how society is governed. It is a jurisprudence that fits perfectly with a political agenda dedicated to the growth of big government.