The false promises of modern liberalism 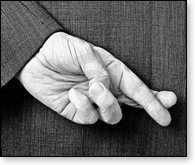 There are two promises that modern liberalism asserts — two images about itself that it propagates. First, that it strives to fulfill the communal bonds and yearnings of human beings, to mitigate the harsh brutalities of an Ayn Rand-type of conservatism. And second, that it, and only it, represents the needs and interests of the common person.

Liberalism does not foster social unity

With respect to the first promise or image, liberalism is supposed to favor the equality or collectivist nature of people, even if that means a sacrifice to their free and individualistic nature. This, anyway, is the theory. But contemporary liberalism, despite its promises, has ceased representing the true communal interests and needs of human beings. Instead, modern liberalism in its political agenda has substituted a government-centered focus for a communal focus. It has adopted a simplistic but ultimately counterproductive proxy for the more complex subject of what binds individuals into a community.

Modern liberalism is not characterized by a pursuit of true community or commonality, but rather by a mere advocacy of buffet-line governmentalism — an attempt to attract a governing majority by offering an array of government benefits to a diverse assortment of special interests. But this "buffet-line" liberalism is nothing more than a pandering to a shallow and crass culture-of-the-self, aimed at gaining votes through the indulgence of government-created individual desires.

Nothing expresses this type of liberalism more than the Obama campaign's "Life of Julia" ad. This ad takes the viewer through numerous stages of the life of fictional "Julia," showing all the individual benefits she will receive from an array of government entitlement programs, apparently without ever having to pay for them. At age 3, Julia is enrolled in a Head Start program that prepares her for kindergarten. At 18, she goes to college on government student loans and then later benefits from the government-subsidized interest rates on those loans. At 27, Julia is able to focus on her work, rather than worry about her health, because Obamacare requires her insurer to cover birth control and preventative care. At 31, "under President Obama she decides to have a child," evidently with the help of a government-funded artificial insemination program. At 42, because of a Small Business Administration loan, Julia starts her own business, and at 67 she relies on Social Security and Medicare. And so she lives her life, continually dependent on the government and reaping the individual benefits that government offers. 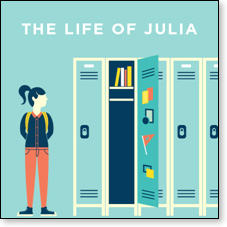 The Julia ad tells viewers to vote Democrat, not because Democrats represent the civic ideal of a pursuit of goals and values common to all Americans, but because if elected, the Democrats will dole out government benefits and entitlements to their favored constituencies. There is no commonality or community present in the Julia ad; there is only the brandished appeal of a buffet line of individual benefits. It reflects the Democratic political strategy that has been in force since the FDR era: to use the distribution of government benefits to create a permanent Democratic majority addicted to those benefits.

This indeed is how the federal government has operated under President Obama. The Obama healthcare law gives a long buffet line of benefits to Democratic supporters like unions and secularists and big business, but it gives virtually nothing to the average American, who must foot the bill for this huge entitlement program. Similarly, the financial reform bill creates big competitive advantages for the mega-banks, which donated heavily to Obama in 2008, but imposes debilitating regulatory burdens on the small and independent banks that never engaged in the kind of reckless financial dealings that contributed to the recent financial crisis.

The liberal erosion of community and social unity

The promise of representing the communal interests and values of America is not only a false promise of modern liberalism, it is also a promise that is actually undermined by the liberal agenda. There is a dangerous poverty in America today — more dangerous than just an economic poverty. It is a spiritual impoverishment; an assault on age-old civilization norms and cultural values; an erosion of traditional family, religious and neighborhood ties. It is a poverty of commonality.

The common bonds that once united and strengthened America have been severely strained by a cultural liberalism that denigrates all traditional bonds and shared values. The Left has greatly expanded government, but has done so in a self-centered, individualistic, entitlement kind of way. Consequently, the expansion of government has fueled a kind of self-centered individualism.

The Left has ridiculed patriotism and the shared community of such cultural institutions as religion at the same time that it has called upon Americans to pay higher taxes to support individual entitlement programs. But there's no real communal spirit or public connectedness underlying these programs; there's just the satisfying of individual wants. The poor demand reparations; the middle-class scrambles for entitlements; and the rich relish a sexual liberation while retreating to their tax-saving accountants and gated-community cocoons. Meanwhile, as the Left continues to promise more and more entitlement benefits, the faster it speeds government to fiscal disaster.

The false promise to the common person 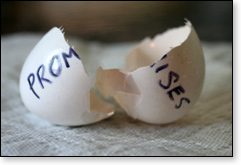 The more pervasive government grows, the less space and freedom is available for the private sector of society. But the private sector is where the opportunity and dynamism exist. And this opportunity and dynamism are what makes America the most powerful immigration magnet the world has ever known. This opportunity, and the social mobility it offers, is why immigrants from every nation come to America; it is what has historically offered the poor of today the chance to become the middle class of tomorrow.

The great deception fostered by the Left's constant pursuit of expanded government is that only government can represent the interests of the poor and middle-class against the dominating power of the rich and powerful. But this claim contradicts the very nature of political power about which the Left keeps preaching: money confers political power, and the more money one has, the more political power one has. Therefore, given this message, it is logical that the rich will use their political power to control government according to their own interests. The poor and average American will just have to hope that big government, dominated by big money, will be a somewhat paternalistic one.

The elite's affinity for big government

Throughout the history of Western Civilization, civic responsibilities were placed on all members of society, and particularly on the wealthy and powerful members of society. Social welfare was expected to be conducted through private charity and compassion. Voluntarism was the agent of social welfare, especially by those who could most afford to volunteer their time and resources — the wealthy.

These duties are still talked about, but in a different way. Now, in the age of big government — and now that big government has almost completely taken over the social welfare function — civic morality and responsibility are defined by one's willingness to support bigger and more pervasive government.

Big government, in a very real sense, has become the modern substitute for the democratic virtues of charity, compassion, and civic duty. And this works very well for the wealthy. All they need to do is vote for bigger government and attend posh fundraisers for liberal candidates. This will satisfy their civic duty. This will mark them as charitable, compassionate, and moral individuals. And all the while, they can privately hire the brightest accountants to find ways to diminish the tax bill that they publicly support and that the common person will have to pay. 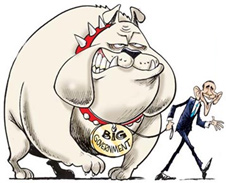 The compatibility of big government and big money

It is because big government is compatible with big money. Big government gives an advantage to the rich, because the rich can afford to navigate all the regulations, which in turn cause insurmountable obstacles to the average person and the small business.

A continually expansive government does not simply perform the vital functions that only a government can perform and that society needs to have performed. Instead, big government becomes a cause in itself, expanding in ways that simply contribute to the growth of government. This explains the multi-million dollar Obamacare grant to Nashville that was used to provide free spaying and neutering of pets. How does this relate to the health of average Americans?

Or consider the Environmental Protection Agency policy, as articulated by an official at the EPA: "Like when the Romans conquered the villages in the Mediterranean. They'd go into little villages in Turkish towns and they'd find the first five guys they saw and crucify them." Similarly, the EPA randomly picks out companies in the energy industry and "crucifies" them with costly regulatory prosecutions. But it's never the rich who end up getting crucified — it's the workers and small businesses who can't protect themselves against the might of a powerful government.

The rich may have the resources and inside information to navigate the maze of big government, but the average person keeps falling further and further behind the more government expands. And as history is demonstrating, government is on a path of continual growth. In 1938, during the midst of the Great Depression, government spending at all levels (federal, state, and local) was approximately 15 percent of GDP. By 1980, government spending had doubled, to 30 percent of GDP. Today, it has increased to 36 percent. And according to the Congressional Budget Office, it will be 50 percent by 2038.

Suffocation of the private sector hurts the common person 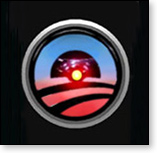 Government has become like Hal in the movie "2001: A Space Odyssey." When it becomes powerful and pervasive enough, it will take on a life of its own. And at that point, it will be impossible for the average person to control it.

The political crisis in Greece shows most clearly where the liberal agenda is leading. Government fiscal crises like the one occurring in Greece do not threaten the rich, who always find ways to ship their money to safe investment havens overseas. Such crises hit the average person the hardest.

After having been hooked on government entitlements, people have to be torn from their addiction to such entitlements and thrust out into a life on their own, where they will have to engage in a brutal competition with everyone else who is scrambling to replace the removed government lifeline. And then the average person will suffer yet again when the government budget crisis leads to a broader economic crisis, which in turn, because of the government's role in causing the initial crisis, will lead to a political crisis of mass riots, street violence, and government paralysis, as is occurring in Greece.

It is called an austerity program when government tries to impose fiscal discipline on itself and cuts back its entitlement spending. But in fact, the real austerity program began back when the government began its overspending binge and grew to a point that the private sector could no longer support it, because that was when economic growth began being strangled and when society took its first real step to austerity.

Perhaps this is why the Left, in its political campaigns, engages in such vitriolic attacks on its opponents. Not only can it not defend its governing record, but it can't really even defend its fundamental promises.