Obama not subject to charges of treason? 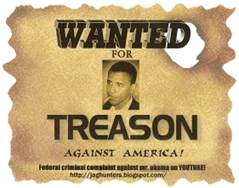 Treason is generally defined as "betrayal of country: a violation of the allegiance owed by somebody to his or her own country, e.g. by aiding an enemy."

High treason is defined as "treason perpetrated by somebody against his or her own country."

Another apt definition of treason is "any attempt to overthrow the government or impair the well-being of a state to which one owes allegiance; the crime of giving aid or comfort to the enemies of one's government."

It is my contention that Barack Hussein Obama has perpetrated all of these. It is also my assertion that our current Congress and our increasingly leftist court system have allowed — and continue to allow — Obama to perpetrate such treachery upon the United States of America and its citizens with impunity.

From the start, Obama has defrauded and undermined our country

Prior to his 2008 campaign, Obama was never vetted as to his eligibility to run for the office of president.

Once elected to the most powerful position in America, and arguably the world, Obama then issued an executive fiat that all of his prior records (school transcripts, passport information, birth certificate, etc.) were to be sealed and summarily hidden from the American people and the world.

Since that time, Obama has produced multiple "birth certificates" that have each been proven to be fraudulent, including the ostensible long-form birth certificate released April 27, 2011.

Within the first week of his presidency, Obama also issued executive orders to fund foreign countries' abortions, donate at least $20 million to terrorist Hamas (under the guise of "Palestinian relief"), and begin testing his ability to censor public information through another executive order to ban showing or posting the video of his retaking the Oath of Office. Along with myriad other mysteries, one has to ponder why this was a great concern to Obama.

Shortly thereafter, Obama issued another executive order that brought the Census Bureau under his sole jurisdiction and control. This strongly appears to have been effected by Obama in order that he — alone — would have the ability to interpret and skew any and all census results that did not meet with his approval.

Once he gained (many say "usurped") the office of the presidency, Obama has undertaken repeated attempts to unravel the First Amendment. These attempts have ranged from banning and refusing to speak with reporters who asked him tough questions to actually locking them in closets!

With no one stopping him, the Obama syndicate becomes increasingly bolder and more criminal every day. 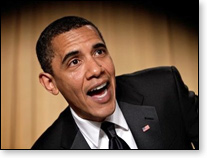 When he discovered — even after the 2010 mid-term elections — that no one from the Establishment Republican side of the House of Representatives would stop him, Obama stepped up his game to put into place America's first official dictatorship. Side note: Even the new Speaker of the House — Rep. John Boehner — apparently prefers golfing with Mr. Obama to actually saving the country from the ongoing tyrannical takeover being undertaken by Obama and his minions. Despite a letter Boehner recently sent Obama questioning the president's authority to wage war against Libya, Boehner and the other Republicans-in-name-only continue to embolden Obama toward expanding his growing usurpation of power.

Obama has purposely, and with apparent malice toward America and its people, caused the U.S. economy to be all but destroyed, has worked to end jobs for Americans, and even laughs at us — on video — on an almost daily basis.

The latest slap from Obama — revealing his contempt for our intelligence — is his comment on jobs projects he originally said were supposed to be "shovel-ready." Joked the president: "Shovel-ready was not as shovel-ready as we expected."

In April of this year, Obama mocked a man who had asked him about the extremely high price of gasoline and laughed at him while he said: "I know some o' these big guys, there still drivin' their big SUVs. You know, they got their big monster trucks and everything. You're one of 'em? [points to man in audience]. Well now, here's my point. You know, if you're complaining about the price of gas, and you're only gettin' 8 miles a gallon [laughs at man, pauses for audience to laugh at man, mocks the man with facial expression]... You know [laughs] you might have a big family, but it's probably not THAT big [laughs, audience laughs]... So — how many you have, 10 kids you say? 10 kids? [mocking facial expression again, encouraging people to laugh at the man] Well... you definitely need a hybrid van then... Like I said, if you're gettin' 8 miles a gallon you might wanna think about a trade-in."

Yet, Obama continues to spend money — our money — on our enemies overseas, and give taxpayer money to his unions, while partying at the White House as if there's no tomorrow, spending billions on his and his family's increasingly frequent and extravagant vacations. And now with the lack of any real opposition from either Congress or the growing Socialist/Communist court system, Obama apparently has full sway to do whatever he pleases to attack and decimate both We-the-People and our country — and he IS doing it. No wonder he laughs at and derides us at every opportunity! 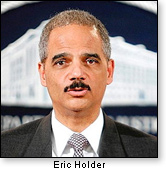 Obama and his (now misnamed) Department of Justice chief Eric Holder have filed suit against Arizona and other states (now to include Georgia) who had the audacity to fight the annihilation of their states due to the government's refusal to enforce laws against illegal invasion. And he has encouraged other countries (Mexico and other Latin American countries) to do the same. Obama is now siding firmly with foreign countries that are lined up against the United States of America. This is called high treason.

These actions on the part of the Obama administration constitute no less than an attempt to bring down the country, throw out Federalism, end the Constitution's protections for both the states and the citizens of our country, and establish a dictatorship. There is no other logical conclusion.

The latest atrocity committed against We-the-People is Obama's response to Boehner's letter regarding Obama's now-illegal war in Libya, in which Boehner cites the Constitution's Article 1, Section 8: "The Congress shall have Power.... To declare War, grant Letters of Marque and Reprisal, and make Rules concerning Captures on Land and Water; To raise and support Armies, but no Appropriation of Money to that Use shall be for a longer Term than two Years; To provide and maintain a Navy; To make Rules for the Government and Regulation of the land and naval Forces; To provide for calling forth the Militia to execute the Laws of the Union, suppress Insurrections and repel Invasions...."

Obama's response is that the United Nations now trumps or replaces the U.S. Constitution.

Obama wrote: "U.S. forces are playing a constrained and supporting role in a multinational coalition, whose operations are both legitimated by and limited to the terms of a United Nations Security Council Resolution that authorizes the use of force solely to protect civilians and civilian populated areas under attack or threat of attack and to enforce a no-fly zone and an arms embargo."

Obama has now "officially" done away with the Constitution and made America subservient to the United Nations.

Virtually every day, Barack Hussein Obama is committing multiple treasons and high treasons against the United States of America. And STILL he is allowed to do so with nary a scolding...or a whimper. Nothing is ever done to stop him. Isn't it time for us to do so? Isn't it?

Who or what group might be willing to organize a few massive marches on D.C., and especially Congress, to stop this insanity and destruction of our country, our lives, and everything that — by the grace of God — we Americans have built or hold dear? Otherwise, there seems to be no other solution except violent civil unrest.

Even dyed-in-the-wool Democrat James Carville has said: "You know, look...you're smart enough to see this. People, you know, if it continues, we're going to start to see civil unrest in this country. I hate to say that, but I think it's imminently possible."

We-the-People can...if we have both the resolve and the courage to do so.