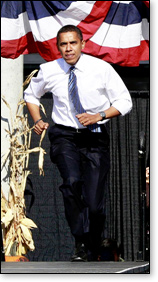 The drivel the media are blathering about Obama's 2012 race for reelection is absolute baloney! All those talking heads and print (so-called) journalists should be ashamed of themselves for prattling on about this unserious subject while studiously avoiding the urgent issues that threaten the very life of our country.

These are issues that a maniacal Nancy Pelosi, as House Minority Leader in the lame-duck session, is intent on cramming down the already-gagging throats of American voters who loathe her fetish with Marxism so much that on November 2 they decisively returned the House she had appropriated back to We the People. As columnist Ralph R. Reiland writes, it was "the greatest defeat for a newly elected president in a midterm since...1922."

Make no mistake about it, when the Obama-Pelosi-Reid-orchestrated disasters listed below take place, this triumvirate will applaud them, as any disaster that befalls our country fits neatly into their vision of Big Bad America. Yes, the very same America that brought them to the pinnacle of prominence, wealth, and power is the country they're working overtime to destroy.

Here is just a sampling of what's in store: 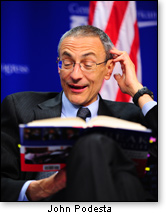 According to TheDailyCaller.com, to accomplish this draconian agenda, John Podesta, head of the Center for American Progress — which is funded by George Soros — issued a report in which he suggested to the "president" that he use federal agencies and executive branch power to circumvent Congressional approval, as well as rulemaking, and even the armed forces, "to accomplish important change," and that such means "should not be underestimated."

The Armed Forces? Is Podesta mistaking America for Nazi Germany? This is nothing less than horrifying, but, I must add, vintage Leftism!

In other words: "Damn the torpedoes (in this case, the Congress) — full speed ahead." The hell with the November 2nd vote, the will of the people, the U.S. Constitution, and the law! They've meant nothing for the past two years...and to the Obama regime, they still mean nothing!

After the midterm shellacking and a decidedly less-than-successful Asian tour, Obama has been featured in tabloid headlines around the world, some saying that he's having a "nervous breakdown." Even Sean Hannity said on his radio show that "The feeling among some people in the White House is that this president is unhinged, that he's detached, that he's losing it. He's obsessed with critics, very specifically obsessed with Fox News. He can't stand Biden, he hates the Clintons, and the Clintons hate him. If the president is brought bad news on the economy, he has a meltdown every time he hears it. And this is what people — and I'm telling you my sources are reliable — are telling me." 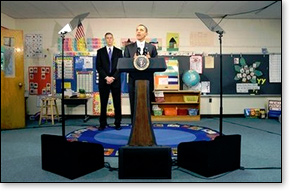 I don't buy it. Many people, including me, have written about Obama's pathological narcissism, his out-sized self-regard, and an insecurity that impels him to use a teleprompter to speak to a kindergarten class! And now we see that he is psychologically unable to acknowledge any accountability for the massive midterm losses.

But this kind of loss makes people like Obama angry — not despondent — in turn fueling and energizing his lame-duck efforts.

You can hide, but you can't run

While the Obama-Pelosi-Reid destruction is taking place, the perpetrators will be exulting. Although they tout "equality" for the masses, meaning widespread mediocrity, they — like the communist oligarchs they admire — never tire of indulging in crass materialism, non-stop partying, and decadent excesses.

All of which brings me to the conviction that Obama will never run for a second term, for the following reasons:

Looking back over Obama's nearly two years in office, it should be obvious to everyone that as things got worse and worse — the tanking economy, escalating unemployment rate, the BP oil spill disaster, even the recent slap-down at the G-20 — he never lost the bounce in his step, his broad smile, his appetite for golfing (or vacationing, in general), or his predilection to entertain lavishly three or four times a week.

This is because for DNA Leftists like Obama, two things are immutably true:

The first is that if it's bad for America, it's intrinsically good! Remember Obama's strange interview with Steve Kroft of "60 Minutes," in which Kroft was so startled (horrified? appalled?) when Obama inappropriately smiled and chuckled when discussing the plunging economy, forcing Kroft to ask: "Are you punch drunk?" But Obama couldn't help himself...it made him happy!

The second is that everything done to further THE PLAN is good, meaning the plan to destroy free-market capitalism, subvert the Constitution, bloat the size of government, raise taxes, coddle terrorists, indiscriminately open America's borders, genuflect to the backwater tyrants at the U.N., and generally strip America of its exceptionalism. 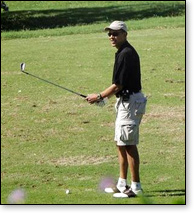 No, Obama won't run in 2012, although he'll be coy about it for at least a year. He has no taste for compromise and his over-weaning narcissism won't allow him to be the head of a devolving minority party. Besides, I think his handlers are not pleased with the thwacking he took in the midterms, and will be looking hard for another puppet. In fact, George Soros, Obama's premier benefactor and perhaps even the puppet master pulling his strings, just told a group of Progressives: "We have just lost this election, we need to draw a line. And if this president can't do what we need, it is time to start looking somewhere else."

Instead of running, Obama will become a man of the world, traveling widely (no doubt to his favorite dictatorships), maybe allowing a few ghost-written books to bear his name, accepting the multi-millions offered him for speaking engagements, and working on his golf swing for the next 50 years.

Now wouldn't that be fantastic for America!

RenewAmerica analyst Joan Swirsky also writes a column for RenewAmerica.
The views expressed by RenewAmerica columnists are their own and do not necessarily reflect the position of RenewAmerica or its affiliates.