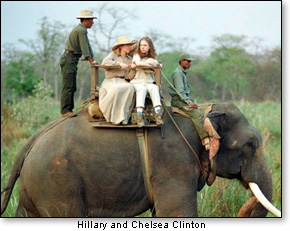 It took the socialists and communists – today known as progressives – nearly one hundred years to implant one of their own in the Oval Office. One could include their ideological soul mates, the jihadists among us, since the dream they all have in common is to transform and/or to destroy America.

The leftist precursors to Barack Obama, of course, were the Clintons ("two for the price of one," as Bill promised in 1992). Yes, Bill was blindsided – no doubt Hillary thought hornswoggled – when then-Minority Whip Newt Gingrich and Congressman Richard Armey introduced sweeping reforms in their Contract with America, and converted the midterm elections of 1994 into a thunderous Republican victory.

But Bill kept his eye unwaveringly on his own and Hill's ultimate goal of staying in office long enough to remake America into an oligarchy with bosses like them at the top and the rest of us in their thrall. It didn't quite work out that way – what with a failed socialized-medicine initiative, the infamous blue dress, strange activities with cigars, those nasty (and successful) impeachment proceedings, consistent ignoring of the FBI's warnings of Islamist threats, and little things like selling our nuclear secrets to China.

But progressives, if nothing else, are patient.

After an eight-year tenure in the White House, Bill went on to gallop around the globe, forming new and cementing old relationships that yielded him hundreds of millions of dollars for the Clinton Foundation....maybe billions, maybe trillions...the tip of this iceberg is just being revealed.

As reported in the April 26, 2015, issue of The New York Post, charity watchdog organization Charity Navigator reported that in 2013 the Clintons' foundation took in more than $140 million in grants but spent just $9 million on direct aid. "The bulk of the foundation's windfall was spent on administration, travel, salaries and bonuses, with the fattest payouts going to family friends."

In the same article, Bill Allison, a senior fellow at the Sunlight Foundation, a government watchdog group once run by leading progressive Democrat and Fordham Law professor Zephyr Teachout, said that "It seems like the Clinton Foundation operates as a slush fund for the Clintons.

No doubt Ukranian oligarch Victor Pinchuk – the largest individual contributor to the Clinton Foundation, with donations approaching, if not exceeding $30 million in donations – got what he wanted when Bill agreed to facilitate a deal involving Pinchuk's oil and gas shipments to Iran, a nation which was and still is on the U.S. terrorist-nation list. Why is it not a surprise to learn that the plan was approved by none other than Secretary of State Hillary Clinton?

Another happy camper was mining billionaire Frank Giustra – who contributed a whopping $31.3 million donation to the Clinton Foundation, and followed with more extravagant donations – when Bill played a crucial role in helping him with a multimillion, probably billion dollar, deal in uranium mining with Kazakhstan. In June of 2010, when Hillary was Secretary of State, she signed off on Giustra's deal to become the majority owner in Uranium One – which promises to provide uranium to the terrorist state of Iran. 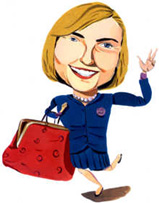 I suspect that these savvy moguls "got" both Clintons to a tee, and admired them for doing star turns at imitating the thinking and acting of dictators worldwide, covering the seediness of it all by talking of "all the good" their foundation does.

In their post-White House years, Bill the globetrotter flourished, while Hillary had an undistinguished record as a one-term senator. Her four years as Secretary of State, however, have been marked by (1) the ongoing scandal and tragedy of Benghazi that left four Americans dead, (2) a drastically devolving Middle East, including our worst relationship with longtime ally Israel since its founding 67 years ago, (3) an "upset" button with Russia, (4) an astonishing six-billion dollars gone "missing" from the State Department under her watch, and now (5) 30,000 deleted e-mails.

What a perfect résumé for a run for POTUS!

In truth, Hillary is not qualified by any objective measure to be president. It is hilarious to watch interviewers asking random people on the street what Hillary has actually accomplished and see them draw complete blanks. But it is horrifying to watch TV anchors ask the same thing of Hillary's backers and receive the identical, non-plussed reactions.

We learn daily of polls that say Hillary has no competition for president, that she out-polls all potential democrat candidates and is ahead of or equal to a few Republican candidates. The TV talking heads who eat, drink, breathe, and live politics thrive on this fluff. But they don't report on – and perhaps don't have access to – the inside polls that tell the candidate the cold, hard, often painful truth of public opinion.

I suspect that Hillary, who is unsuited for the presidency not only by a lack of accomplishment but also by temperament and personality, will have her candidacy derailed either by imploding poll numbers or an indictment. She will fake an illness to get out of it, and have some shady doctor attest to her "condition."

That will leave the country, probably six months before the election, with no Democrat running for the presidency, or, at best, a late entrant who has no chance of winning.

As stated, progressives have patience. But they simply cannot and will not tolerate the kind of excruciating hiatus they suffered when George W. Bush was president from 2002 to 2009. Not when they believe they've come so far in actualizing their hate-America goals:
ELEPHANT ALERT! 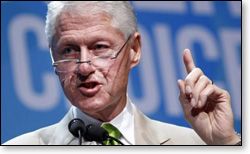 What to do? Enter the real elephant in Hillary's scandal-plagued room.

"It is wrong what they're doing," Bill intones. "With their witch hunt (poor choice of words IMO), they have vilified Hillary unfairly, and they are wrong. She would have made a great president, better than I was, smarter than I was. (Can't decide if this is a wince or cringe moment). This cannot stand. But I can! I can stand in Hillary's place. And I will. I am announcing that I am now running for president, running on her platform for a better America. And I ask for your support."

By now, those TV talking heads who eat, drink, breathe, and live politics are reaching for their overhead oxygen masks. Bill has once again taken their collective breaths away, and secretly they gleefully anticipate four more years of juicy stories.

"What about the Constitution?" Mark Levin will blare from his radio soapbox. But his concerns will fall on indifferent ears.

A media that not once – not once – raised the issue of constitutionality when Kenya-born and therefore ineligible Barack Obama ran for president in 2008, and a media that have studiously avoided any questions about the constitutional eligibility or lack thereof of Republican candidates Ted Cruz, Marco Rubio, and Bobby Jindal, are not about to protest Bill Clinton's third term.

More likely they'll cite FDR's precedent, and that old leftist nugget, "fairness." In their view, it is simply unfair if a formerly estrogen-producing woman is not our next president!

Today, we see media talk-show personalities disingenuously discussing Hillary's potential legal troubles and remarking how astounding it is that "not exactly conservative" outlets like The New York Times, The Washington Post, Politico, CNN NBC, MSNBC, on and on, are going after her for what they speculate – speculate??? – are conflicts of interest and possibly bribery and extortion in soliciting untold millions for the Clinton Foundation while Secretary of State, for facilitating the sale of 20 percent of the entire uranium-production capacity of the United States to Russia, and for failing to report accurately on at least five annual tax returns that are now, supposedly, being refiled. (That's the short list).

But don't be fooled. All these media outlets have known about these putative crimes for years. And they've known that everything Hillary did – including Clinton Foundation sleights-of-hand – were known about and approved of by Barack Obama, the same Obama who sneeringly told Hillary during the 2008 campaign, "You're likeable enough." 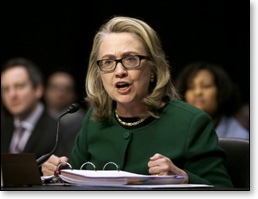 Which raises the question: Why would the chief executive make Hillary Secretary of State and cover for her over her Benghazi fiction? Couldn't be, could it, that everything in politics – and crony capitalism – goes back to the advice that Deep Throat gave to Woodward and Bernstein: "Follow the money"?

Why, you may ask, are all of Hillary's deficiencies coming to light now? I suspect it's because the inside polls I mentioned are plummeting by the day. But more important, because it was always "the plan" to have Bill step in and complete the 100-year mission of transforming America into the kind of socialist-cum-communist country he and Hillary and Obama and all of their Progressive minions prefer.