January 22, 2019
New York Gov. Andrew Cuomo has again threatened his people with extreme abortion legislation that only causes a further deChristianization of the state's culture. 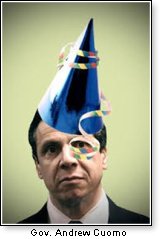 The degree of Gov. Cuomo's long-held secularization of his Catholic faith and morals continues to increase exponentially due to grave impoverishment of his conscience.

On January 7, 2019, the Democrat & Chronicle reported Gov. Cuomo, with Hillary Clinton at his side, called for making abortion a constitutional right in New York.

Many years ago, the Catholic governor was once given proper Catholic initiation by his parents and priests, including the Sacraments of Baptism, First Holy Communion, Confirmation and certain catechesis.

Today, however, Gov. Cuomo chooses to live quite outside Christian life for reasons only known by God. 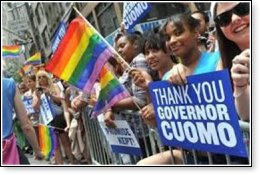 For example, in February 2018, the governor issued an executive order banning his state from awarding jobs to contractors who do not specify transgender and sodomite people as a special protected class.

Recently, Gov. Cuomo publicly invited any and all Christians who did not embrace his extreme views of abortion to leave the state of New York. His own personal depravity includes his living manifestly in the state of adultery with a married woman, Sandra Lee, in the Governor's Mansion and in homes in Chappaqua and Poughkeepsie since his divorce from Kerry Kennedy in 2005. He features photos of his mistress on his governor's campaign website. 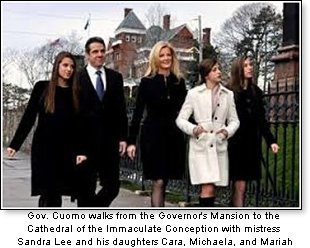 The Hearst-owned Albany newspaper, the Times Union, oftentimes has featured photos of Gov. Cuomo walking with his mistress and his three daughters, heading eastward one block to the magnificent Gothic Cathedral of the Immaculate Conception to attend Holy Mass and receive, sacrilegiously, the Holy Eucharist.

A demoralizing scandal to the faithful Catholics of his state

One needs to immediately question why Governor Cuomo has not been rightfully disciplined and denied Holy Communion by Albany Bishop Edward Scharfenberger, or by New York's Cardinal Timothy Dolan.

Surely Bishop Scharfenberger knows well that the Catholic Church's Code of Canon Law, Code 915, forbids: "Those upon whom the penalty of excommunication or interdict has been imposed or declared, and others who obstinately persist in manifest grave sin are not to be admitted to Holy Communion."

In addition, the same Code of Canon Law, Canon 1331, para. 1, forbids an excommunicated person, even one who has incurred a latae sententiae excommunication (an ipso facto self-inflicted excommunication), from receiving Holy Communion or any other of the Sacraments of the Church, except for Sacrament of Penance if they are to be reconciled to the Church. 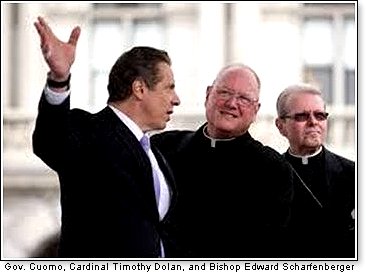 The Albany Bishop can talk about Cuomo until his mitre floats down the Hudson River, but it will make little difference. Unless the Albany bishop or the New York cardinal enforce the Church's well-defined canon laws already in place, then the laws are useless and the Church is betrayed.

Please, Bishop Scharfenberger and Cardinal Dolan, it is your ordained duty to govern your people with vigor and courage. Enforce Canon 915 against New York Catholic Governor Andrew Cuomo.