Can America stop the mail-in voter scam of 2020? 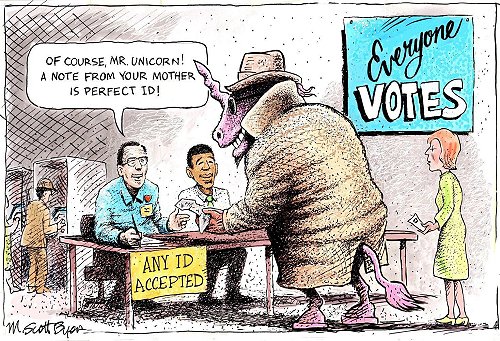 I believe that the 2020 election is being sabotaged by a fake "lockdown mail-in ballot" scam caused by the man-made SARS-CoV-2 virus pandemic of 2019. Truth is stranger than fiction.

America's election mail-in ballot scam has been a huge problem the last four national elections (2012 thru 2018). Is there any solution that can be applied with only 40-some days until the November 3, 2020 election?

Amazingly, today President Donald Trump told America that the U.S. government has just found bags of mail-in ballots floating down a river. He revealed that his administration doubts that this 2020 election can be counted as an honest and valid election due to the illegal mail-in ballot scam taking place within Democrat Party controlled states. 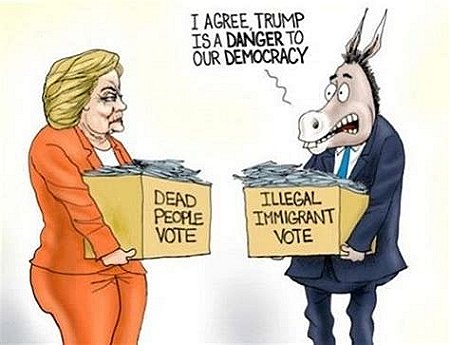 For example, at least 28 million mail-in election ballots went missing over the last four elections. They were never found and never counted, according to the Federal Election Commission and reported by RealClearPolitics.com.

It is estimated by many credible American legal organizations that at least some elected Democrat Party officials in the last four national elections were in fact not actual winners of their elections.

Sixteen states limit who can vote absentee, but eleven of these states have eased their rules, letting anyone cast an absentee ballot in primary elections, as well as November 2020. In my state, Texas, a legal victory was won to block an expanded mail-in ballot effort; however, Democrats have appealed to SCOTUS.

President Trump and others in his administration have told media sources the dangers of mail-in voter fraud are unlimited, citing the possibilities of stealing ballots from mail theft, fake mail-in ballots printed by criminals and even foreign countries, invalid voter phone calls to election office asking for a second ballot, repeated submissions of ballots, double registrations by mail, youth raiding home mailboxes to collect ballots and sell them to Democrat election members, and forged signatures. Attorney General William Barr has indicated the November 2020 election could be the scandal of our times, as any election conducted predominately by mail-in ballots is ripe for fraud. AG Barr has recently stated he is worried most about the days just after the election and violence planned in our cities. 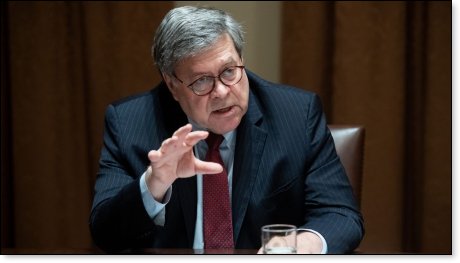 We all can agree now that it’s entirely possible that much of social and political havoc wreaked by the man-made Covid-19 pandemic was orchestrated by the Washington swamp criminals in America’s Democrat Party, led by Pelosi and Schumer, with help from Soros and Gates, to disrupt the election of 2020.

In addition, conflicting instructions have been given by the medical heads of NIH, FDA, CDC in America. Countless numbers of government members of the Democrat Party spread extreme lies and take extreme actions, all in order to stop Donald Trump from winning the 2020 election.

Eyewitness accounts have been come forth since November 2019 from over 10 Chinese doctors working within the Wuhan laboratories regarding the criminal manufacturing and spreading of the SARS-CoV-2 virus from the Wuhan Labs.

If true, was the man-made Chinese Communist Party virus (SARS-CoV-2) developed to shut down America, close industries and businesses, create unemployment, and generate fear among many of America's over 155-million voters, causing them not to turn out to vote, but to stay home? 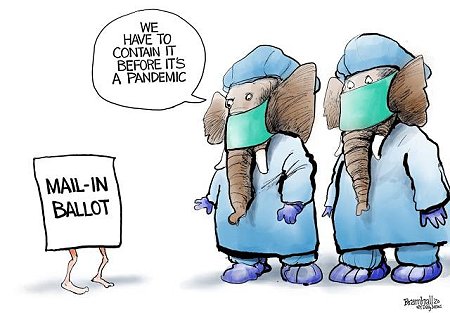 Millions of mail-in ballots have recently been and are still being mailed out to nearly three-quarters of all Americans held hostage in states led by Democrat leaders, with instructions not to leave their homes to vote in person. Why? Because election fraud is easily created simply by wide use of mail-in ballots, where millions of ballots mysteriously are lost or mysteriously show up days after the election has closed.

I believe that the 2020 election is being sabotaged by a fake "lockdown mail-in ballot" scam in connection with the man-made SARS-CoV-2 virus pandemic of 2019. Truth is stranger than fiction.

Ever since Donald Trump announced his candidacy in May 2015, unprecedented Satanic efforts have been underway to stop the cleansing of the Washington, D.C., swamp promised by Donald Trump.

The evil is taking place widely, not just in Democrat Party-run states.

Our prayers can mitigate the harm and resulting chaos. 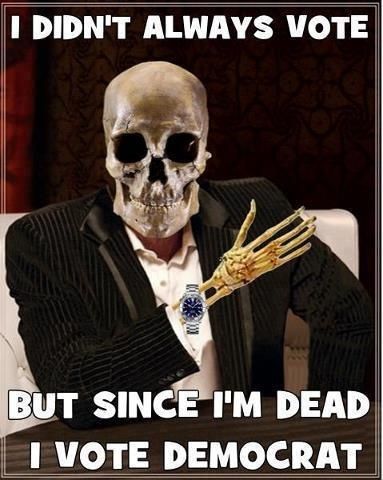