June 10, 2019
Mark Levin, perhaps best known as TV/radio's hell-raising intellectual, has outdone himself in taking down the media for their attitude, sometimes interpreted as "Hark! We are your betters, thus you must heed our wise words." In his New York Times bestseller Unfreedom of the Press, Levin punctures every form of fakery tossed at a sometimes over-tolerant public. The term "freedom" as applied to today's media – mainly as they deal with what today passes as "news" – often abuses the trust accorded by their readers, listeners, and viewers. 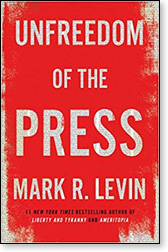 Levin believes this is brought about "through censorship, group-think, bias by omission, and passing off opinion, propaganda, pseudo-events and outright lies as news." Those who have experienced the pressures on the broadcast media from the inside – in those earlier days and today – will nod knowingly as the author roundly criticizes the Federal Communications Commission (FCC).

That agency was granted authority in the thirties by a power-mad New Deal Washington to keep radio stations on a short leash. That was enabled by the regulator's more frequent broadcast license renewal schedules that granted President Franklin D. Roosevelt "maximum authority over the life and death of radio stations."

The networks? CBS got the message, and vowed not to permit any broadcast that "in any way was critical of the policy of the administration." NBC also caved. (Donald Trump, not yet born, might have some such authority on that. Today's' media – on the other extreme – rarely let the man up for air. Perhaps Trump's mistake today is in supporting pro-American policies that are anathema to the 21st century's hard left.)

But in the thirties, FDR, whose quest for more authority knew few bounds, indirectly recruited Senator Hugo Black (an Alabama hardline segregationist) to conduct a wide-ranging investigation of anti-New Deal critics, including journalists. Access to tax returns examined by the government in search of smear weaponry in that probe dated back to 1925. 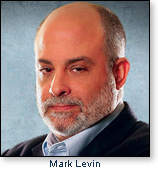 These are mere examples of a volume that is chock-a-block with citations of heavy abusive pressures brought to bear on press freedom – again sadly enabled by the media themselves through their own inclination to act alike, do alike, and think alike...

Mark Levin tells his readers that he wrote UNFREEDOM OF THE PRESS to deal with "the complicated issue" of the media's collapsing role as a bulwark of liberty."