Getting the conservative message across 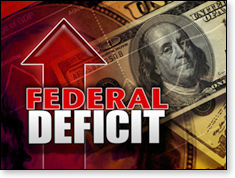 Republicans seem to be on the defensive in the debate over Medicare and the federal budget deficit. They are being branded extremists willing and eager to shut down the government. They are depicted as turning their backs on American values — bent on robbing senior citizens of health care and impoverishing young children. They have been loudly vilified by Democrats, perhaps even more so than either Saddam Hussein or Moammar Gadhafi.

So two questions have to be asked: Are conservatives on the wrong side of this debate? And if not, then why is their message being rejected?

There is much political debate and partisan sniping over these budget and entitlement issues, but not everything is simply a matter of opinion or political ideology. There are an array of facts — facts that are true for both Democrats and Republicans. And these facts, these unquestionable facts, are a good place to begin.

First, the federal government is incurring mushrooming and unsustainable deficits. No one disagrees with this statement. No one.

These unprecedented deficits threaten not only the integrity and solvency of our government, but the health and prosperity of our society and economy. Uncontrolled escalating deficits will lead to a debt crisis that will bring sharply rising interest rates, followed by draconian cuts in government budgets, followed by severe economic downturns. This is not a matter of political opinion; this is a fact of economic reality.

Second, the driving force behind the federal deficit is entitlement spending, such as Medicare. Absolutely no one disputes this fact. Indeed, the rapidly increasing expenditures under Medicare are not only driving up the federal deficit, but crowding out other government programs — such as law enforcement, public libraries, and special education. President Clinton recognized this reality, but his plans to pass an entitlement reform package were derailed by a series of scandals. President Bush similarly recognized this reality, but his attempt to implement entitlement reform during his second term was unsuccessful, due in part to the way he pursued that reform.

In addition to the judgments of sixteen years of presidential administrations prior to the Obama administration, every government agency or private think-tank that has ever examined this issue has come to the same conclusion: federal entitlement programs are spiraling toward insolvency and, without substantial reform, cannot survive two more generations. 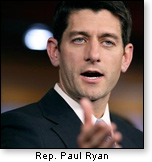 The final indisputable fact is that, despite our nation's budget crisis, neither President Obama nor the Democratic Senate were the first to propose a solution to this difficult and controversial problem. The president deliberately refused to put a proposal on the table, forcing the Republican majority in the House to be the leader on this issue. Indeed, the president hasn't even followed the recommendations of his own bipartisan debt commission.

And the Democratic Senate, throughout all the debates on this issue stretching back to before the 2010 elections, never has come up with a serious budget plan or Medicare reform bill. Instead, the primary focus of Democrats has been to cast Rep. Paul Ryan, who had the courage to offer a detailed plan of how Medicare could be saved and strengthened, as extremist and anti-elderly — although it's interesting to note that while Rep. Ryan's budget proposal received 40 votes in the Democratically-controlled Senate, President Obama's eventual budget plan received zero votes from the same Senate.

The message of conservatives is simple — just as simple as if a person's accountant informed him that he has used up all his savings, and that he is reaching the limits on all his credit cards. He is spending what he doesn't have, and he has to cut his spending.

America is a great and special nation. It hasn't been defeated by foreign military powers or natural disasters or internal revolution, but it will be defeated by economic debt. Liberals contributed to America's health when they raised concerns about and proposed remedies to racial injustice. They argued that America could not survive if such injustice continued. And that argument needs to be made again. America will not survive if it continues its unrelenting plunge into debt. Communist China will eventually refuse to accommodate this escalating debt. And when that happens, a bill will come due that the American people cannot repay.

The conservative message is easy to understand — and appreciate. All Americans are in this together. We live in the greatest, most prosperous nation in history. This prosperity, our health, our education, our safety, are due to the country in which we live. If this country declines, so does every individual American...and every American family.

Why the message seems unembraced

If our nation's newspapers and network news broadcasts are to be believed, Paul Ryan and his Republican colleagues in the House are villainous rogues in the tradition of the old robber barons — as if they are trying to use the budget crisis to manipulate America in a way that specially benefits the rich and powerful, as if the whole Medicare problem were just a fabrication by Ryan and the Republicans to wage war on America's elderly. 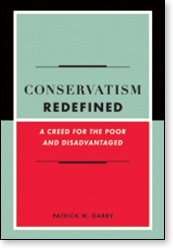 This skewed portrayal of conservatives is nothing new. It's been around since the New Deal, when Democrats depicted conservative objections to a radically expanded federal government as hostile to the average American and favoring the rich and powerful. In my book Conservatism Redefined: A Creed for the Poor and Disadvantaged, I outline this history of liberal portrayal of conservatives as captives of the rich and powerful. Indeed, for decades, the Left has been successful in portraying itself as the sole defender of the common person.

The Left touts itself as the advocate of education for the average American, even though it refuses to adopt a voucher system that will enable the poor to send their children to the same schools attended by children of the rich. It represents itself as the defender of the urban poor, even though it has pushed the building of high-rise public housing projects that have become drug- and crime-infested squalors that have ruined the lives of millions of people. It pronounces itself the ally of the immigrant, even though it often seeks to trap the immigrant in a life of dependency. It depicts itself as the defender of the elderly, even though its assault on law enforcement and traditional cultural behavioral standards have made cities dangerous and inhospitable places to live. It portrays itself as the advocate for the working class, even though it knowingly adopts policies that inhibit the creation of new jobs and contribute to the destruction of existing jobs. It calls itself defender of a peaceful and compassionate society, even though its rejection of the assimilation model has fostered a fragmented society of adversarial racial and ethnic groups.

But this mischaracterization of both liberalism and conservatism isn't completely the work of the Left. Conservatives have been somewhat complicit in this mischaracterization, insofar as they have failed to make clear the ways in which their ideology best empowers the poor and middle class. This failure suggests, by contrast, how conservatives can successfully wage their budget and Medicare debate.

Proposals for Medicare reform should not be promulgated as if they were policies generated by the Chamber of Commerce, social mandates issued by the comfortable and well-off in society. Instead, they should be articulated from the perspective of the most vulnerable in society. Given the current state of Medicare — viewed from the standpoint of the person most in need — it can easily be shown that Democrats are doing nothing to help.

By doing nothing, Democrats are virtually guaranteeing that Medicare will fail. And if it fails, it will leave the most vulnerable without any health coverage. The rich will survive just fine; they do not need government entitlement programs. But the poor who rely on Medicare will suffer greatly. 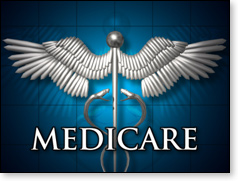 The Democrats don't like the private insurance aspect of the Ryan Medicare plan. This isn't surprising, but it reveals that Democrats care more about the size and reach of government than they do about actually serving the real needs of real people. If they did care about the needs of people, they would allow the poor to attend the schools of their choice, for instance, rather than keeping them captives of a failing public school system.

The liberal opposition to the insurance and consumer choice provisions of the Ryan plan also reflects a double standard in the Left's approach to poor and working-class Americans. The liberal elite proclaim the pro-choice mantra, but when it comes to policies for the average person, the elite deride any consumer choice options as anti-American.

We must expose liberal hypocrisy

If the rich haven't prospered by being dependent on government, why should the liberal elite now patronizingly mandate that the poor should be so dependent? The wealthy achieved their status through the dynamic opportunities created by the American economy, and yet now the liberal elite act as if the poor and working class should focus on government aid or government employment as their source of economic well-being.

It almost seems that over the past half-century conservatives have come to believe the distorted image propagated by the Left — that it is the Left who are the natural ally of the poor, and it is the Right who are antagonistic or indifferent to the poor. If conservatives are to prevail in the important debate over Medicare and the budget deficit, they must convincingly turn the tables, and show the poor and working class just how their plan offers the best solution to the crisis at hand.