July 7, 2014
We at RenewAmerica would like to call attention to what appears to be blatant un-Americanism by powerful communication giant Facebook.

You be the judge. There's no other plausible explanation. Consider this —

On April 15, RenewAmerica's Facebook page dramatically surged to 100,000 fans — after years of being parked around 10,000. The chart below shows how dramatic this influx was:

The obvious reason for the surge in fans was RA's prominent promotion of Obama's constitutionally-required impeachment in article after article, graphic after graphic, spread across our Facebook page and shared with recipients week after week, beginning late last summer.

All due mainly to RA's aggressive public push for impeaching the most lawless, traitorous president in our country's history. This impeachment push was the only distinguishing thing RA was doing differently that could possibly explain the remarkable escalation of its Facebook page's influence after years of plateauing around 10,000.

The obvious connection between our vocal impeachment effort and our dramatic surge in reach was impossible to dismiss.

Facebook's "Obama brigade" to the rescue

A month after RA's Facebook page reached 100,000 fans — and just days after it surpassed 153,000 — our rate of "likes" began plummeting as precipitously as it had risen. This sudden collapse began noticeably May 14. In the eight weeks since then, the page has gained just 7,000 new fans — dropping from 1,500 new likes a day to just 100 a day, a 93 percent decline.

To see how stunning this drop in rate of likes was, take a look at the chart below:

Not coincidentally, on that day, May 14, we'd posted one of our weekly "Burma Shave ads" (as we call them) on our Facebook page — one that pointedly summarized what many informed Americans have validly concluded: 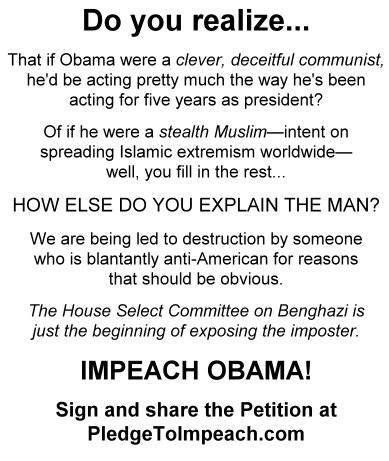 That ad quickly reached 225,000 recipients, and Facebook evidently responded by interfering with our rate of new likes. Given the way things were normally playing out before this intervention, we are justified in assuming Facebook is the sole cause.

It appears we offended someone in authority.

No doubt Facebook officials will claim they curtailed our page due to a handful of complaints by Obama defenders (like themselves) who disapproved of such candid criticism of the usurper in the White House, but such interference is still what it is: un-American, even destructive to the preservation of our constitutional republic.

If a president is cleverly deceiving the nation, as Mr. Obama verifiably is, the public has a right to be told.

Respected as the world's most popular social media service, Facebook has a duty to its far-reaching community, and to the nation that enabled that community, to be fair and neutral in matters of legitimate politics. Considering that the Constitution prescribes impeachment and removal as the sole remedy to a lawless president, Facebook has no valid justification for squelching vitally important public discourse in a partisan effort to protect an unprecedentedly errant Chief Executive.

It's noteworthy that former federal prosecutor Andrew McCarthy, in his new book Faithless Execution: Building the Political Case for Obama's Impeachment, argues that although impeachment and removal are increasingly appropriate in the wake of Obama's subversion of constitutional and statutory law, as well as his abuse of the public trust, such congressional action depends on awakening the political will among the American people if it is to succeed. For Facebook to stifle the open communication essential to building such political will, as it appears to have done in this case, is the height of social manipulation.

It's deceitful and unpatriotic — if indeed our suspicions about Facebook's behavior are correct. (Bear in mind the media giant recently came under fire for conducting mass covert psychological testing on its patrons.)

In a truly free country, no subversive bully should be allowed such inordinate sway, without challenge, in the political arena. I call upon Facebook to cease and desist from any appearance — or reality — of interfering with the growing movement to impeach and remove Barack Obama, and let the American people, in ways mandated by the Constitution, decide the man's fate.

Stephen Stone is the President of RenewAmerica and co-sponsor of Pledge To Impeach.