The following statement comes from Father James D. Zatalava, pastor of Our Lady of Fatima Church in Altoona, Pa., and founder of CatechismClass.com, the only cradle-to-grave online catechetical program. 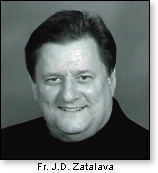 'Although admirable in his condemnation of the mortal sin of formal cooperation in each and every abortion that 'extraordinarily gifted' (that's Father Newman's characterization) 'Chicago thug' (that's Bill Clinton's description) Barry H. Obama makes possible, the good Father misleads his flock by offering them the cheap grace of a single experience of Sacramental Reconciliation.

'One little old confession and one little old absolution doesn't wipe away any Catholic's ongoing participation in this ongoing Holocaust for which each one of 53 percent of Catholic voters is, and will continue to be, individually responsible. A lifetime of hard and sustained penance might possibly avert an eternity spent in Hell. Please God that it will. However, keep in mind, God will not be mocked. Neither will He tolerate the abuse of His Holy Sacraments, including Reconciliation.

'The existence of the Sacrament of Reconciliation does not give any Catholic a license to sin. A confessor is obligated to refuse absolution to a penitent whom he suspects is patently insincere in his expression of contrition, or presumptuously manipulative in her use of the Sacrament. Second graders learn that it's not okay to say: 'I'll commit this sin now, and than just go and confess it after I'm done, and everything will be fine and dandy.'

'The most hardened and cynical anti-Catholic alive would not accept the preposterous proposition that there is an adult Catholic alive who did not know on Election Day that to vote for Obama was gravely sinful. As those with the stain of the blood of millions of God's children approach the confessional, they must have a faith-filled hope to make a grace-generated change.

'Also, as they lay dying, ending a penitential life filled with acts of restitution attempting to undo the murderous evil they've done, these serial killers of innocent humans should anticipate a long stay in Purgatory to make reparation for the evil that continues because of their intrinsically evil act, even after they have been sacramentally forgiven for it.

'The good news is that fortunately, if not ironically, a bishop or priest who himself is steeped in mortal sin  and their number is legion, according to Raymond Arroyo  can still confect valid Reconciliation  not for themselves, of course, but for those they have been ordained to serve.

'As any bishop, priest, or lay person who seeks either political justification or societal redemption for having posited this gravely evil act can twist himself into an intellectual pretzel, so too can he even pull the satanic wool over some naive confessor's eyes. But for the sake of his immortal soul he simply shouldn't try to jerk around an all-knowing and all-mighty God.'