November 29, 2008
As Father Andrew Greeley continues to recover from a serious head injury suffered earlier this month, I thought I'd feature images from two of his (out-of-print) non-fiction books  Confessions of a Parish Priest (paperback edition), from 1986 and 1987; and Furthermore! Memories of a Parish Priest, from 1999 and 2000.

Interestingly, in Confessions (page 131), Father Greeley made some rather keen observations about a certain segment of the clergy  observations that proved all too accurate a decade-and-a-half later. 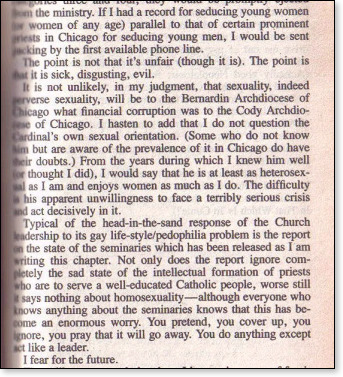 Fast forward to 1999, when Furthermore! was released. One of the most troubling passages Father Greeley ever wrote  and he's written plenty of them over the years  is on page 80. It's something that has essentially flown under the radar (ahem) of the mainstream media. 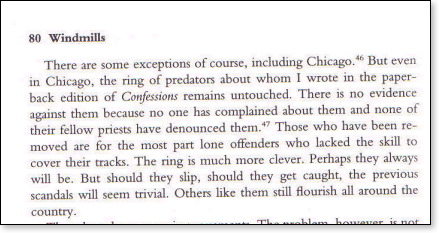 Check out the sentence beginning, "But even in Chicago, the ring of predators..."; then check out the footnote, which begins, "They are a dangerous group..." Notice his assertion, "They know that I have in safekeeping information which would implicate them. I am more of a threat to them dead than alive."

That passage and footnote caught the eye of Stephen Brady, founder of Roman Catholic Faithful, Inc., and Catholic attorney Sheila Parkhill. Both investigated Father Greeley's claims, with Mrs. Parkhill calling on Father Greeley (in 2004) to reveal the "information" he claims to have "in safekeeping"  for the sake of justice.

To date, he has remained mum on the matter.

Perhaps he will take this "information" with him to the grave.