Matt C. Abbott
'The Thrill of the Chaste'

December 8, 2008
Catholic author and blogger Dawn Eden graciously provided me with an excerpt from her 2006 book The Thrill of the Chaste: Finding Fulfillment While Keeping Your Clothes On, now in its sixth printing, having also been published in Spanish, Polish, and Chinese.

Ms. Eden has an interesting background. From her bio: 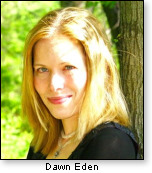 'Dawn Eden was born to a Jewish family in New York City. When she was in high school, she lost her faith and became an agnostic. During her 20s, in the 1990s, she worked as a rock journalist, interviewing bands for music magazines. From there, she went to work for New York City's biggest tabloid newspapers, the New York Post and the Daily News.

'She underwent a dramatic conversion to Christian faith at age 31, which eventually led her to enter the Catholic Church. With her new faith came a change in lifestyle as she discovered the truth and beauty of Church teachings on chastity. That led to the publication of her first book, describing her personal transformation in the hope of helping others make positive change in their own lives.

'Since her book came out, Dawn has been featured on NBC's 'Today' show and EWTN's 'Life on the Rock.' Now living in Washington, where she is pursuing a master's degree in theology at Dominican House of Studies, she has spoken about chastity to colleges and young adult groups throughout North America, England, and Ireland, as well as World Youth Day 2008 in Sydney.'

"I wrote The Thrill of the Chaste because, as a convert to Christianity who had previously lived a bohemian lifestyle as a rock journalist, I knew how difficult it was to find a book on chastity for those who had not been chaste. There are many books aimed at teenagers to help them be abstinent until marriage. But there are very few for disillusioned young adults who have found that the sexual 'freedom' touted by society and the media has hidden costs.

"The following excerpt deals with loss of innocence, which is not necessarily the same as loss of virginity. In the chapter from which this excerpt is taken, titled 'The First Cut Is the Deepest,' I talk about how pushing sexual boundaries causes one to develop habits of detachment which will ultimately make it difficult to develop the emotional intimacy necessary for a committed love relationship. When you become chaste  making the decision to reserve sexual activity for marriage  you learn how to overcome this detachment and become able to love fully."

The excerpt from Ms. Eden's book (published by Thomas Nelson and used by permission):

You discovered that each time you recrossed that line, it felt less dangerous. If you wanted to recapture the thrill of dipping your toe into uncharted waters, you had to get in deeper.

Yet, as you explored further, you could never recapture that feeling you had before you took that first step  the feeling of hopefulness and unexplored possibilities. You might try to repeat the same thing you did before with a new man, but in your mind you would always compare your new date to those who had preceded him.

Whether he was better, worse, or just different, he was coloring on pages that already contained the outlines of other men.

What exactly happened at that moment when you passed from innocence into worldliness? The simplest way to put it is that you realized for the first time that you could separate sexual sensation from love. [...]

The answer is to stop protecting yourself, and the only way to do that is to take yourself out of situations where you have to protect yourself. To truly connect with someone, you must allow yourself to be vulnerable. You can't be vulnerable if you're always having to ask yourself whether the man you desire will be there to catch you when you fall.

I know that I will never regain my innocence. But I can regain my vulnerability.

You can see Ms. Eden's blog by clicking on this link.