Yaoundé, Cameroon  Pope Benedict XVI's plane had not yet touched down in Africa before his trip was defined by the Western media's distortion of a statement he made regarding condoms and the spread of HIV/AIDS.

George Wirnkar, director of outreach for Human Life International's Francophone Africa Region, expressed shock over the furor in the Western media, considering the Holy Father's reception in Africa had been so positive.

"I saw over 2,000 people who stayed in heavy rain singing and praying as the Holy Father presided over vespers in the Basilica of Our Lady Queen of the Apostles," said Mr. Wirnkar. "This is not a sign of dismay or disillusionment with the Church, but of devotion and joy."

Western media have widely reported on the pope's statement that the promotion of condoms actually worsens the problem of HIV/AIDS transmission. What was not given by these media outlets was the context for the statement:

'I would say that this problem of AIDS cannot be overcome with advertising slogans. If the soul is lacking, if Africans do not help one another, the scourge cannot be resolved by distributing condoms; quite the contrary, we risk worsening the problem. The solution can only come through a twofold commitment: firstly, the humanization of sexuality, in other words a spiritual and human renewal bringing a new way of behaving towards one another; and secondly, true friendship, above all with those who are suffering, a readiness  even through personal sacrifice  to be present with those who suffer.'

"The hopeful message articulated by the Holy Father is exactly what HLI is trying to bring to fruition in cooperation with African leaders like George Wirnkar. This is about affirming what is most life-giving in African culture."

HLI had just completed its first conference of Medical Midwifery and Nursing Students for Life, Africa's first such program. Held March 13-14, and planned to precede Pope Benedict's visit to Africa, the group of over 125 students listened to speakers and discussed pro-life issues. Conference participants held 10 banners along the pope's welcome route expressing support for the visiting leader of the Catholic Church.

"Papal visits are usually a time of great spiritual renewal and a time when many people are listening to the Church," said Mr. Wirnkar. "Speaking to physician trainees, practitioners, nurses and other medical professionals about issues which Pope Benedict and Pope John Paul II have taught so clearly is crucial, so the Holy Father's visit seemed the perfect time to kick off this program.

"The true story of the papal visit is that the Holy Father is inspiring African Catholics and all persons of good will to have hope, to deal directly with the root causes of the problems affecting our people, and resist the slogans of the West which offer false solutions to these problems."

"It is vital that pro-life young people are not converted to the pro-abortion or population control mentality while in medical school. The graduates of the MMNSL program will become the pro-life professionals we can count on in the future. HLI is proud to reach an ever larger audience in Africa with the pro-life message thanks to George Wirnkar and our other leaders." 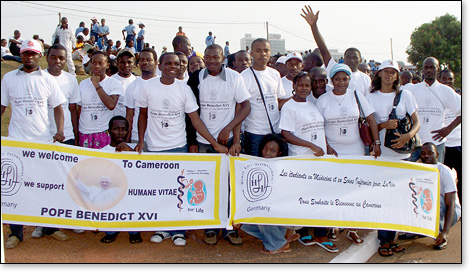 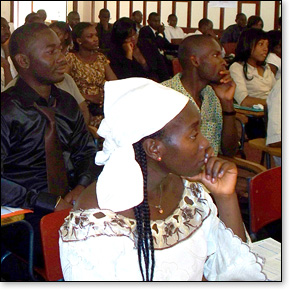