Matt C. Abbott
'The Virtuous One'

August 26, 2009
The following is an excerpt from The Virtuous One, a self-published "factional" Catholic novelette that makes for a good, albeit fast, read. An interesting and important note: The author, Toby Blake (a pen name), is a member of the clergy in the Archdiocese of Miami, which has had its problems in recent years (see here and here).

Says Mr. Blake: "The most accurate part of the book is the financial dealings and descriptions." In this regard, "very little was made up." The murders in the story "are just about the only fiction," while "none of the names used was the name of the actual parish involved [in the financial scandal], even though some of the parish names happen to exist in the archdiocese." 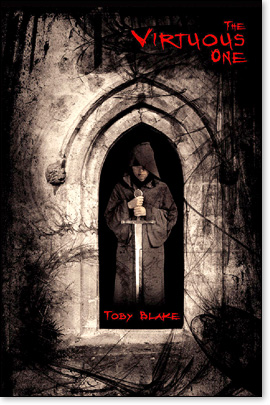 Sal knew how the financial side of the Catholic Church worked. He learned from the local pastor in his hometown of Guadalajara, who had been kind enough to take him in when he no longer had a family. One time when the priest was showing his affection toward the young Sal by giving him gifts, Sal asked "How can you afford these expensive gifts when you are a priest?"

The older man explained to the boy, "A pastor of a parish is like a king. He can do whatever he wants with the funds under his control, which are all the funds that are collected from the parishioners. The pastor only has to worry about the annual assessment from the ordinary (or head bishop for the Diocese), but even that is not a problem in most cases, as most ordinaries won't put too much pressure on a pastor because they have been in that position themselves.

"Let me explain it another way. It would be a lot like if I managed the biggest grocery store in downtown Guadalajara and my boss told me that as long as I wasn't too greedy, I could do whatever I wanted with the cash that was received and the checks as well, but be careful with the checks, for they leave a trail."

Sal later learned that the Protestants were so much smarter when it came to collections. They controlled every penny, from collection to distribution, and if a pastor took anything that wasn't rightfully his, he would very quickly be turned over to the authorities. They controlled their finances from the bottom up.

While on the other hand the Catholic Church attempts unsuccessfully to control finances from the top down. They attempt to confuse the issue by saying that they are acting in accordance with the will of the Holy Father and canon law, which provides for a finance council at every parish. What they don't say is that those pastors who even bother to have a finance council appoint whomever they like and give them exactly as much power as they are inclined to, which is normally very little, if any at all. Because they are acting on behalf of the Magisterium of the church, or more specifically, hiding behind that subterfuge, priests, bishops, and archbishops can disclose just as much of their parish or diocese finances as they wish. It's as if the mere mention of the Magisterium of the church or canon law is supposed to be enough to cloud an individual's mind.

Sal learned it was the same in the United States as in Mexico. The bishop or archbishop normally leaves it in the hands of the pastor as to where the money goes, as long as he receives his assessments in a timely manner and there are no complaints from the parishioners. If parishioners complain to the bishop that their money is being used to pay for their pastor's new and improved lifestyle, an audit will be immediately done. Unfortunately for the complaining parishioners, the audit will be based entirely on the information provided by the pastor. As soon as the accounting firm gives the all clear, which it invariably does, the pastor is back in business.

A pastor at St John's parish in Darien, Connecticut, was convicted of taking 1.4 million dollars from parishioners over a period of years. A local legislator, with the urging of St. John's parishioners, had the audacity to propose legislation that would provide for a council of parishioners who would be legally in charge of the church's finances. For his efforts, the legislator was confronted with the full force of the Catholic Church.

There are fortunately a minority of pastors, bishops, and archbishops who are proactive in their dealings with the parishioners' contributions, which is very possibly why the pastor at St. John's was turned over to authorities in Connecticut. These few men of integrity put very tight and transparent controls over the collection and distribution of funds in their parishes or diocese. These are the exception, as Sal knew, and the Miami Archbishop was no exception.

Joseph Rivetti, Joe to his friends, Archbishop of Miami, controlled the Catholic population of Florida. He was seventy-one years old and less then five years from retirement. Rivetti was very happy with his life, even more so now that he had found the handsome Jonathan Blaine.

Standing five feet and nine and a half inches, and weighing 305 lbs, Joe Rivetti was not the most attractive man of the cloth. Not having a lot in the way of looks to begin with, what little Rivetti did have had been destroyed by time and a predilection for gin and tonic, not necessarily in that order.

Rivetti didn't fool himself. There was no chance that someone like Blaine would be interested in him if it weren't for the power he wielded. Rivetti wasn't going to make waves as long as he had all this. He lived in a beautiful multimillion dollar oceanfront home, and he knew he would be well taken care of in retirement. Between what he had accumulated for himself and his future and what little his parents left him, he felt very comfortable. He loved to tell trusted friends, "I'm a diocesan priest. I never took a vow of poverty."

He had heard of the affair between McCollum and Blaine. He knew McCollum from way back and just didn't care a whole lot for him. When later he was introduced to Blaine for the first time, his jaw went slack. He wondered how that old fart McCollum was involved with this beautiful man.

Within a couple of weeks of their meeting, the archbishop appointed Blaine as "Secretary to the Archbishop," the first of many titles he would reign down on his beloved Blaine. Life was very good for Archbishop Rivetti, and he certainly wasn't going to do anything that might change his current situation.

Sal also had what he wanted for now: new cars, new clothes and almost limitless power within the parish. What he needed was for McCollum to participate in his theft in some form or another so that he didn't have to worry about McCollum turning on him.

His opportunity came one day when McCollum complained at dinner, "I wish I had a condominium. I'm not that far from retirement, and I doubt that I will like what the archdiocese provides me."

Sal knew immediately he would have to develop a plan. Sal went over his plan the next night at dinner. He waited until McCollum was well into his second bottle when he began. "Father, I think I have a way you can buy your condominium." He had McCollum's attention. "We can take the funds for the initial deposit from the surplus of the church by diverting it to your stipend account." He went on. "Father, you know that you deserve this after all that you have done for this archdiocese, all the assignments you have had to endure, and all the obsessive parishioners you have had to deal with."

McCollum had finished the second bottle of wine and had begun the third while Sal was talking. McCollum was feeling the effects of the wine and wasn't sure he understood.

"How do we justify such a large stipend account?" McCollum asked.

"That's easy, Father. No one will ever ask about the stipend account, and if they do, we will tell them that the surplus money is made up of gifts from our generous parishioners."

McCollum finally began to understand what Sal was saying and replied, "It only seems right. I do everything for these parishioners, rich bastards, and they do nothing for me."

The following week, they found a three-bedroom condominium on the ocean with a beautiful view. Fortunately, financing was fairly simple and quick. They were able to get McCollum a loan for the condominium from the bank without revealing financial records, which increased the finance charge, but they didn't care because they weren't paying for it.

It was a short time after the closing that McCollum began to feel a twinge of conscience. He had never taken anything significant from the church before. He called his friend and ex-lover Father Blaine and confessed, "Jonathan, I think I might be having what St. John of the Cross called a dark night of the soul."

Blaine responded, "We all go through that, Leonard. Give it some time."

McCollum didn't explain the source of his feeling further. He truly felt shame for what he had done. McCollum responded after a short pause. "I guess you're right. Time heals all." They exchanged pleasantries and hung up. McCollum continued to drink until he passed out. After a few days, McCollum was able to rationalize that the church owed him this after all.

Now that Sal had the pastor in his pocket, he began to work on the hierarchy in the Archdiocese. When he heard from McCollum that the secretary for the archbishop, the judicial vicar, his adjunct, and the vicar general were all going to take the cruise of a lifetime to the Mediterranean, he contacted them to let them know he had a friend in the cruise industry who could get them discounted tickets. Sal upgraded their cabins to an ocean view with a verandah. When they asked about the invoice for their trip, Sal told them, "Please don't worry about it. I'll take care of it," and they didn't.