March 10, 2010
The following is the text of a talk  unedited and without commentary  given on March 8, 2010 by Father Emery de Gaál, Ph.D., chairman and associate professor of systematic theology at the University of St. Mary of the Lake in Mundelein, Ill., at Chicago's Holy Name Cathedral. The talk was part of a mini-conference that featured one of the alleged seers of Medjugorje, Ivan Dragicevic. Many thanks to Father de Gaál for providing me with the text of his talk. 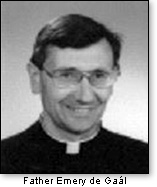 I should like to thank Father Matt Compton for inviting me to speak to you today and Mr. Dennis Johnson for kindly introducing me to you.

Dear Friends of Our Lady,

Christian, Catholic Faith is always something joyful and objective. The incarnation of Our Savior Jesus Christ, the annunciation in Nazareth, his supernatural birth in Bethlehem, his preaching; they all constitute an objective reality; likewise Our Lord's crucifixion and resurrection are objective, tangible facts, accessible to the senses.

For this reason we Catholics want our faith experience to be not a mere premonition, a subjective sentiment or a private feeling or experience, but something the Church universal can verify and confirm for us. Thus all Catholics the world over can celebrate a particular aspect of our faith. This includes Marian visions and apparitions.

The apparitions in Medjugorje are an ongoing phenomenon that has yet to come to an end. Only when they have been completed, can the proper Church authorities pass judgment on them. The Italian weekly Panorama reports Cardinal Ruini will head a commission exploring a recognition of the Medjugorje apparitions. Yet, there is no gainsaying, already now we, as Catholic faithful, can state that there are numerous and bountiful blessings originating in the small town of Medjugorje since the year 1981. The renowned Swiss theologian Hans Urs von Balthasar considered Medjugorje authentic. So does the most noted living Mariologist, the French theologian Father René Laurentin.

There were and are numerous visions and apparitions of throughout the history of our Catholic faith. For these the Catholic Church developed three different categories: 1) intellectual, 2) imaginative and 3) bodily or sensible. For instance the visions of St. Teresa of Avila were produced by God almighty in her intellect. Others are imaginative; such as the dream of St. Joseph, urging him to bring the Holy Family into the safety of Egypt. The apparitions St. Bernadette Soubirous had in Lourdes were certainly sensible in nature. Likewise the dancing sun of Fatima was bodily.

Already in the fourth century St. Gregory of Nyssa (+ 394) relates St. Gregory the Wonderworker (died 270/5) had been granted a vision of John the Evangelist and the Mother of the Lord. Since then there is a long succession of reported appearances of Mary. In the past 200 years the most celebrated apparitions were 1830 in Paris to St. Catherine Labouré, in 1858 in Lourdes to St. Bernadette Soubirous and in 1917 to three shepherd children in Fatima. However, over twenty reported apparitions of Our Lady since have been rejected by the ecclesiastical authorities; for example those at Ezkioga in Spain in 1931, at Bergamo, Italy in 1944, at Espis in France in 1947, at Lipa in the Philippines in 1948, and at Necedah, in Wisconsin in 1951.

In referring to such events the Church authorities use terms such as "ut pie creditor," "ut asserunt," "ut fama est," in English "as is piously believed," "as people say," and "as the report says." The Church is concerned with the propriety of the devotions such apparitions give rise to and the orthodoxy of teaching which is associated with them.

Apparitions are grounded in Holy Scripture. God is able to engage the exterior, human senses and both provoke visions and evoke auditions. The human soul and spirit can be fully engaged by God eternal in such a way that the human being does not remain passive. Such personal experiences are private in nature and are as such distinct from the public revelations of God recorded and completed in Sacred Scripture. This public, biblical revelation is mandatory deposit of faith for all Christians.

Of the over 500 Marian apparitions recorded, only a fraction, namely 14, can be verified by the Church authorities. Some occurred at the founding of a religious order, or when a natural disaster struck but people were miraculously saved, or occurred in the situations of imprisonment or slavery. They all promoted the growth of faith, aroused contrition and conversion and admonished those lax in venerating Our Lady, to greater piety.

As the noted theologian Michael Schmaus stated, it is extremely difficult to distinguish between credible private revelations and human auto-suggestions, hallucinations, ideational impressions, dreams or mere illusions. Famously, already concerning the visions of St. Brigit of Sweden John Gerson and John Turrecremata could not agree at the Council of Basle in 1431-37. Pope Benedict XIV, Eusebius Amort, Scaramelli and Poulain attempted to develop objective criteria for authentic apparitions. These criteria include the credibility of the person having the vision, the nature and circumstances of the apparition, its content, purpose and effects. Numerous apparitions have not been addressed by the Church as it had proven too difficult to authenticate these.

As the respected Mariologist Leo Cardinal Scheffczyk had observed: the apparitions of Mary are singular experiences, gifts of God in Jesus Christ for the human being, who possesses both body and soul. They concretize the mystery of Mary. A Marian apparition manifests the presence and work of Mary within history. Amongst all the saints exclusively Mary exercises a universal, salvific, that is saving role. She is the Mother and prototype of the whole Church. Her apparitions enliven the Gospel faith, calling the faithful of all ages and races to prayer, conversion and repentance. More recently, she also enjoins the faithful to pray the rosary as well as to labor towards personal sanctification.

The approbation of a Marian apparition by a local ordinary, that is bishop, does not yet necessarily include the recognition of its supernatural origin. The approbation claims the following: 1) the content of the supposed apparition contains nothing contrary to Catholic faith and morals, 2) it can be publicized and be content of a public liturgy, and 3) there are sufficient grounds to assume a supernatural origin of the apparition in question.

More specifically the Church on the diocesan, national or Vatican level inquires:

The Church deduced the authenticity of Guadalupe in 1531 by way of the sensus fidelium, the believing sense of the faithful. She also acknowledges that "réellement la vièrge apparu à Bernadette Soubirous," in reality the Virgin appeared to Bernadette Soubirous in 1858. Most recently, the Polish Cardinals Wyszynski and Wojtyla, the late John Paul II of blessed memory, recognized in 1977 that the apparitions of Giertzwald, in Poland of 1877 "are dignified with credibility." In 1938 the apparitions of Beauraing, Belgium of 1932 were first denied having a supernatural origin. However, in 1949 their supernatural character was confirmed. Most recently, the apparition of Kibeho in Rwanda, Africa in 1981 was recognized in the year 2000; 19 years after the apparition occurred.

May this evening in Chicago's historic and beautiful Holy Name Cathedral promote our veneration of Our Lady, deepen our commitment to Jesus Christ and enliven our life in the Blessed Trinity.

Praised be Jesus Christ, now and forever Amen.  Mary, Seat of Wisdom, pray for us.

In response to a reader's request for clarification regarding Father's assertion that the Church will wait until the alleged apparitions have ceased before making an official judgment, Father writes:

'Usually the Church hesitates to arrive at a definitive verdict until after the supposed apparitions ceased  provided nothing dogmatically objectionable is found already while apparitions occur. As I continue in the text, Cardinal Ruini will head a commission examining Medjugorje while apparitions still occur.'