March 15, 2010
The clergy abuse scandal continues to make headlines worldwide (some of the coverage has been fair and accurate, but some of it has not, in my view). Years before the secular media began delving into the scandal in 2002, The Wanderer had been reporting on aspects of corruption among clergy and religious that were largely ignored by the secular media, perhaps because they deemed them not newsworthy due to The Wanderer's reputation for Catholic orthodoxy.

Below are slightly-edited excerpts from a 2004 Wanderer report by Paul Likoudis (which also appeared in the newsletter of Stephen Brady's Roman Catholic Faithful) regarding the bizarre and tragic death of Father John Minkler, a priest of the Diocese of Albany, in February 2004.

It's obvious that corruption still very much exists in the U.S. church...

by Paul Likoudis
'Three months after the mysterious death of Albany priest Father John Minkler, found dead 48 hours after he was coerced by Bishop Howard Hubbard and his chancellor Father Kenneth Doyle into signing a statement denying he ever wrote a letter nearly nine years ago to the late John Cardinal O'Connor exposing Hubbard as the ringleader of a cabal of homosexual priests, Hubbard has withstood a barrage of withering criticism that reveals not only his tenacity, but his still-solid grip on the powers-that-be in Albany — and that includes the politicians, the press and the police....

'Father Minkler, who was a close collaborator with this reporter for the 'Agony in Albany' series of articles published by The Wanderer 13 years ago, was on retreat at a monastery in Spencer, Mass., when he received a call from Father Doyle summoning him to the chancery.

'When he arrived for the meeting, he was presented with an affidavit denying he had written the letter to O'Connor, and ordered to sign it.... The affidavit concluded: 'I make this statement of my own free will and I know that making a false statement is a crime.' Contrary to Minkler's recollection to this reporter, made six hours after his visit to the chancery, Hubbard lied to reporters at a press conference after Minkler's death was reported:

The meeting with Doyle was very brief, and he only saw Hubbard from a hallway. Minkler told this reporter, 'Father Doyle had this disclaimer all made out, and he said, 'Sign it.''

"I signed it with mental reservations, and now I'm going to have to go to Confession down in New York, because I can't go in this diocese,' Minkler told me.

'But in that long Friday evening conversation with this reporter, Minkler sounded scared. He recounted the day's events, and feared that the disclosure of the letter he wrote to Cardinal O'Connor in 1995 — at the cardinal's request — would be disastrous for him. 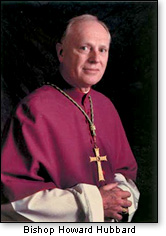 'He asked for advice, and he was extremely apprehensive about a forthcoming meeting with Hubbard, set for Monday February 16. I suggested that he pre-empt the meeting by holding his own press conference 'and let everything out.' His response was that if he did that, 'I'd be dead.'

'On Monday morning at 7 a.m., Albany Catholic Bob McCauley called me, barely able to speak through his tears, to say Minkler was dead. He died early on Sunday afternoon, apparently of a heart attack. [It appears to have been a suicide; click here.]

'On Monday February 16, Minkler's death was the top news story on Albany radio and television, and by Monday evening, reports of Minkler's death was being reported in more than 100 newspapers, mostly through Associated Press reports, in the United States and England....

'The June 10, 1995 letter Minkler wrote to Cardinal O'Connor — for whom he served as a private secretary when O'Connor was head of the military vicariate — a position he held under his uncle, Archbishop Joseph Ryan, who was the military's top prelate — was written at the cardinal's request.

'The pleas of long suffering Catholics living under the oppressive and destructive reigns of Albany's Hubbard and Rochester's Bishop Matthew Clark had finally reached their metropolitan's ears, and O'Connor, Minkler told this reporter, told him to prepare a brief on Hubbard that he would personally turn over to Pope John Paul II.

'According to Minkler, as related to this reporter the evening of Feb. 13, O'Connor made a personal appeal to John Paul II to remove both Hubbard and Clark during a visit to the Vatican and, again, according to Minkler, the Holy Father told O'Connor, 'There's nothing I can do.'

'Minkler's letter provided details on Hubbard's deconstruction of the Church in Albany, as well as alleged homosexual proclivities of Hubbard, some of his closest aides in the chancery, and other priests. For example, it mentioned the artificially-inseminated lesbian who was teaching moral theology at the diocesan theologate, co-run by the Diocese of Rochester, St. Bernard's; of the ongoing clergy formation programs run by Clark's and Hubbard's fellow North American College graduate Father Tom Powers, which brought in a succession of speakers denying Catholic teaching on such vital issues as the Real Presence, the ontological understanding of the priesthood, etc., with Hubbard approving; how Catholic social service agencies and even parish priest priests send pregnant women to Planned Parenthood clinics for abortions; of the large numbers of Catholics going over to the Society of Pius X and Protestant sects; of the New Age proselytization at the diocesan camp and retreat center at Pyramid Lake; liturgical abuses and Hubbard own sloppy way of celebrating Mass, etc.

'The bulk of the letter — naming names — however, focused on the recruitment of homosexuals to the diocesan priesthood at the same time the diocese actively, sometimes aggressively discouraged normal men from applying for the priesthood; that the diocese often recruited seminarians from other dioceses who had been dropped for homosexual activity; of homosexual priests inviting male lovers to join the priesthood; of the solicitation to homosexual activity by a chancery official of a penitent in the confessional; that doctors and other professional health care workers had reported seeing AIDS patients who claimed they had relationships with Albany priests ... and of Hubbard's ongoing, relentless, vicious persecution of the faithful laity.

'In another letter, dated 1-9-01, in his own writing, which has not yet surfaced in the press, Minkler provided the names and proclivities of the homosexual priests in the diocese.

'Over the past 13 years, Minkler performed an invaluable role as The Wanderer's most reliable source in the Diocese of Albany. When this paper reported on a priest leaving the priesthood to marry another man, a priest boasting of having AIDS, the case of a priest having a sex-change operation, clerical arrests involving some of Hubbard's favorites, and many, many stories which never made the local newspapers, these stories almost invariably came from Minkler.

'One of Minkler's greatest attributes is that he was trusted by many priests — who often didn't know who each other were — who reported incidents and affairs to him which he passed on to The Wanderer, knowing that the publicity would add to that ever-accumulating heap of evidence which is, someday, bound to indict Hubbard and force his removal.

'Minkler, ordained in 1972, was a priest for five years when Hubbard was named Bishop of Albany, and saw the immediate effect he had on the diocesan priests. From the start, Hubbard launched a campaign of intimidation and often outright persecution of good priests, banishing old urban pastors to remote rural outposts, showering favors on those priests who exhibited the most outrageous and immoral behavior, ridiculing and ostracizing faithful laity who tried to uphold Catholic orthodoxy, and promoting an agenda of homosexuality, androgyny and sexual dysfunction....'

"Catholic Charities, Bishop Hubbard, to give syringes to drug addicts?"