April 23, 2010
With current news stories involving priests and the seal of confession (see here and here), I'm reprinting the following excerpts from the book Go in Peace: Your Guide to the Purpose and Power of Confession, authored by Father Mitch Pacwa, S.J., and Sean Brown. Thanks to Matthew Pinto and Mike Flickinger of Ascension Press for allowing me to reprint this material.

(Incidentally, the subject of the seal of confession is featured in one of my favorite movies, The Rosary Murders, filmed in Detroit at Holy Redeemer parish and school, where my maternal grandparents, both deceased, attended high school. The trailer for The Rosary Murders, starring Donald Sutherland and Charles Durning, can be seen here, with an additional scene here. From what I understand, it's somewhat similar to Alfred Hitchcock's I Confess  although I must confess  ahem  that I haven't seen Hitchcock's classic.)


Go in Peace
37. What is the "seal of confession" I've heard about? 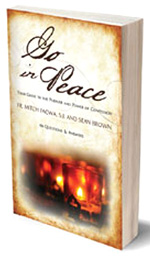 The seal of confession refers to the absolute requirement that a priest never reveal anything he hears during a person's confession. This refers to the sins confessed and any other matters discussed during the confession. Outside the confessional, a priest may not even speak to a penitent about confessed sins (unless the penitent brings them up of his own volition) or even indicate that he has heard a particular person's confession. As the Catechism notes, the sacramental seal "admits of no exceptions" (see CCC 1467)  even if what has been confessed concerns a criminal act (or the intention to commit a criminal act). The Code of Canon Law (canon 983) states that the sacramental seal is inviolable, whether the person has been absolved of the sin or not. If the priest "breaks the seal" by disclosing a person's sin in any way, whether through words or other means, canon 983 calls this nefas, the Latin word for "criminal."

38. What happens if a priest "breaks the seal" and discloses what has been said in confession?

A priest who violates the seal of confession is subject to very severe ecclesiastical penalties. According to the Code of Canon Law, a priest who deliberately reveals a

penitent's sins and identity is subject to an automatic (latae sententiae) excommunication, which can be lifted only by the Apostolic See, i.e., the Pope (see canon 1388).

39. Can a priest really be excommunicated for disclosing anything he hears in confession?

Not exactly. As previously noted, if the priest deliberately reveals a penitent's sins and identity, then he is automatically excommunicated according to canon 1388. If a priest's simple carelessness causes a penitent's sins or identity to become known, then the penalty he suffers can be adjusted to the seriousness of his deed. The punishment can be excommunication or a lesser penalty, such as losing his faculties to hear confessions or publicly celebrate the other sacraments.

40. What if a person tells a priest in confession that he plans on hurting  or even murdering  someone?

The sacramental seal is absolute. This means that nothing the priest hears from a penitent during a sacramental confession may be revealed  not even a penitent's plan to commit a crime such as murder. While this may sound extreme, even harmful to society, the absolute secrecy of the sacrament must be maintained. In such a case, the priest must refuse to give absolution since the person obviously does not repent of the sin that he or she is about to commit. However, even when the priest withholds absolution, the seal remains intact for anything revealed during a sacramental confession.

41. So a priest cannot tell the police about a planned crime which is revealed to him in confession?

No. Since the seal of confession permits no exceptions, a priest cannot disclose any information revealed during a confession to anyone  not even to the police, if it involves a criminal matter. The police need to do their own job of investigating crimes, without help from priests in the confessional. Canon 984 mentions a similar but more common situation in the Church: a master of novices or a rector of a seminary or school who hears the confession of one of his students may not use that information obtained in confession in any way for the external governance of that person. The secrecy of the confessional is sacrosanct.

42. Are there any known cases in which a priest has revealed the contents of a confession?

Though such cases may have occurred over the two millennia of the Church's history, we have not been able to find any modern documented cases of a priest willfully breaking the seal of confession.

43. Have priests ever gotten into legal trouble due to their refusal to reveal a penitent's sins?

Yes. St. John Nepomucene (13401393) was tortured and then drowned by King Wenceslaus IV of Bohemia because he would not reveal the sins confessed by the queen. In 1813, a Jesuit priest from New York, Father Anthony Kohlman, S.J., was called into court to testify concerning matters he had learned about during a confession. When he refused to testify, Father Kohlman was tried for contempt of court. The issue was finally settled when the State of New York passed a law exempting priests from revealing any information obtained in confession.

In another episode, a simple French priest, Abbé Dumoulin, gave a large sum of money to a woman who was later found murdered at a nearby monastery. A knife dripping with her blood was found in the rectory kitchen. Abbé Dumoulin was arrested, convicted, and sent to prison in New Caledonia. However, after three years, the church sexton admitted that he had killed the woman for her money and confessed the crime to Abbé Dumoulin. Keeping the seal inviolable, this holy priest remained silent as a lamb led to slaughter until the sexton confessed his crime to the police. The French Supreme Court acquitted the priest and he returned to his overjoyed parish.

44. Does the seal of confession apply to anyone besides the priest?