April 25, 2010
The following is the text of Tulsa Bishop Edward James Slattery's homily delivered on April 24 during the Traditional Latin Solemn High Pontifical Mass at the National Shrine in Washington, D.C. Bishop Slattery replaced the scandal-tainted Cardinal Castrillon Hoyos as the celebrant for the Mass, which was sponsored by the Paulus Institute. Many thanks to Monsignor Patrick Brankin, director of communications for the Diocese of Tulsa, for providing me with the text of the bishop's homily.

Celebrating the fifth anniversary
of the ascension of Benedict XVI to the throne of Peter
- ad multos annos! - 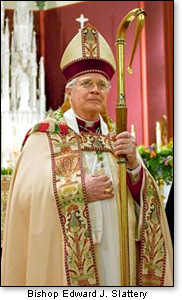 We have much to discuss  you and I ... much to speak of on this glorious occasion when we gather together in the glare of the world's scrutiny to celebrate the fifth anniversary of the ascension of Joseph Ratzinger to the throne of Peter.

We must come to understand how it is that suffering can reveal the mercy of God and make manifest among us the consoling presence of Jesus Christ, crucified and now risen from the dead.

We must speak of this mystery today, first of all because it is one of the great mysteries of revelation, spoken of in the New Testament and attested to by every saint in the Church's long history, by the martyrs with their blood, by the confessors with their constancy, by the virgins with their purity and by the lay faithful of Christ's body by their resolute courage under fire.

But we must also speak clearly of this mystery because of the enormous suffering which is all around us and which does so much to determine the culture of our modern age.

From the enormous suffering of His Holiness these past months to the suffering of the Church's most recent martyrs in India and Africa, welling up from the suffering of the poor and the dispossessed and the undocumented, and gathering tears from the victims of abuse and neglect, from women who have been deceived into believing that abortion was a simple medical procedure and thus have lost part of their soul to the greed of the abortionist, and now flowing with the heartache of those who suffer from cancer, diabetes, AIDS, or the emotional diseases of our age, it is the sufferings of our people that defines the culture of our modern secular age.

This enormous suffering which can take on so many varied physical, mental, and emotional forms will reduce us to fear and trembling  if we do not remember that Christ, our Pasch, has been raised from the dead. Our pain and anguish could dehumanize us, for it has the power to close us in upon ourselves such that we would live always in chaos and confusion  if we do not remember that Christ, our hope, has been raised for our sakes. Jesus is our Pasch, our hope and our light.

He makes himself most present in the suffering of his people and this is the mystery of which we must speak today, for when we speak of His saving presence and proclaim His infinite love in the midst of our suffering, when we seek His light and refuse to surrender to the darkness, we receive that light which is the life of men; that light which, as Saint John reminds us in the prologue to his Gospel, can never be overcome by the darkness, no matter how thick, no matter how choking.

Our suffering is thus transformed by His presence. It no longer has the power to alienate or isolate us. Neither can it dehumanize us nor destroy us. Suffering, however long and terrible it may be, has only the power to reveal Christ among us, and He is the mercy and the forgiveness of God.

The mystery then, of which we speak, is the light that shines in the darkness, Christ Our Lord, Who reveals Himself most wondrously to those who suffer so that suffering and death can do nothing more than bring us to the mercy of the Father.

But the point which we must clarify is that Christ reveals Himself to those who suffer in Christ, to those who humbly accept their pain as a personal sharing in His Passion and who are thus obedient to Christ's command that we take up our cross and follow Him. Suffering by itself is simply the promise that death will claim these mortal bodies of ours, but suffering in Christ is the promise that we will be raised with Christ, when our mortality will be remade in his immortality and all that in our lives which is broken because it is perishable and finite will be made imperishable and incorrupt.

This is the meaning of Peter's claim that he is a witness to the sufferings of Christ and thus one who has a share in the glory yet to be revealed. Once Peter grasped the overwhelming truth of this mystery, his life was changed. The world held nothing for Peter. For him, there was only Christ.

This is, as you know, quite a dramatic shift for the man who three times denied Our Lord, the man to whom Jesus said, "Thou art Peter, and upon this rock I will build my Church, that the gates of hell shall not prevail against it."

Christ's declaration to Peter that he would be the rock, the impregnable foundation, the mountain of Zion upon which the new Jerusalem would be constructed, follows in Matthew's Gospel Saint Peter's dramatic profession of faith, when the Lord asks the Twelve, "Who do people say that I am?" and Peter, impulsive as always, responds "You are the Christ, the Son of the Living God."

Only later  much later  would Peter come to understand the full implication of this first Profession of Faith. Peter would still have to learn that to follow Christ, to truly be His disciple, one must let go of everything which the world considers valuable and necessary, and become powerless. This is the mystery which confounds independent Peter. It is the mystery which still confounds us: To follow Christ, one must surrender everything and become obedient with the obedience of Christ, for no one gains access to the Kingdom of the Father, unless he enter through the humility and the obedience of Jesus.

Peter had no idea that eventually he would find himself fully accepting this obedience, joyfully accepting his share in the Passion and Death of Christ. But Peter loved Our Lord and love was the way by which Peter learned how to obey. "Lord, you know that I love thee," Peter affirms three times with tears; and three times Christ commands him to tend to the flock that gathers at the foot of Calvary  and that is where we are now.

Peter knew that Jesus was the true Shepherd, the one Master and the only teacher; the rest of us are learners and the lesson we must learn is obedience, obedience unto death. Nothing less than this, for only when we are willing to be obedient with the very obedience of Christ will we come to recognize Christ's presence among us.

Obedience is thus the heart of the life of the disciple and the key to suffering in Christ and with Christ. This obedience, is must be said, is quite different from obedience the way it is spoken of and dismissed in the world.

For those whose lives are centered in Christ, obedience is that movement which the heart makes when it leaps in joy having once discovered the truth. Let us consider, then, that Christ has given us both the image of his obedience and the action by which we are made obedient.

The image of Christ's obedience is His Sacred Heart. That Heart, exposed and wounded must give us pause, for man's heart it generally hidden and secret. In the silence of his own heart, each of us discovers the truth of who we are, the truth of why we are silent when we should speak, or bothersome and quarrelsome when we should be silent. In our hidden recesses of the heart, we come to know the impulses behind our deeds and the reasons why we act so often as cowards and fools.

But while man's heart is generally silent and secret, the Heart of the God-Man is fully visible and accessible. It too reveals the motives behind our Lord's self-surrender. It was obedience to the Father's will that mankind be reconciled and our many sins forgiven us. "Son though he was," the Apostle reminds us, "Jesus learned obedience through what He suffered." Obedient unto death, death on a cross, Jesus asks his Father to forgive us that God might reveal the full depth of his mercy and love. "Father, forgive them," he prayed, "for they know not what they do."

Christ's Sacred Heart is the image of the obedience which Christ showed by his sacrificial love on Calvary. The Sacrifice of Calvary is also for us the means by which we are made obedient and this is a point which you must never forget: At Mass, we offer ourselves to the Father in union with Christ, who offers Himself in perfect obedience to the Father. We make this offering in obedience to Christ who commanded us to "Do this in memory of me" and our obediential offering is perfected in the love with which the Father receives the gift of His Son.

Do not be surprised then that here at Mass, our bloodless offering of the bloody sacrifice of Calvary is a triple act of obedience. First, Christ is obedient to the Father, and offers Himself as a sacrifice of reconciliation. Secondly, we are obedient to Christ and offer ourselves to the Father with Jesus the Son; and thirdly, in sharing Christ's obedience to the Father, we are made obedient to a new order of reality, in which love is supreme and life reigns eternal, in which suffering and death have been defeated by becoming for us the means by which Christ's final victory, his future coming, is made manifest and real today.

Suffering then, yours, mine, the pontiffs, is at the heart of personal holiness, because it is our sharing in the obedience of Jesus which reveals his glory. It is the means by which we are made witnesses of his suffering and sharers in the glory to come.

Do not be dismayed that there many in the Church have not yet grasped this point, and fewer still in the world will even consider it. You know this to be true and ten men who whisper the truth speak louder than a hundred million who lie.