May 3, 2010
The immigration law recently enacted in Arizona has, not surprisingly, caused quite a firestorm of controversy. Also not surprising: The United States Conference of Catholic Bishops is on record as opposing the law.

From the USCCB's Web site:

'In solidarity with the Catholic bishops of Arizona, Bishop John C. Wester of Salt Lake City, chairman of the U.S. Conference of Catholic Bishops Committee on Migration, issued a statement April 27, opposing the enactment and implementation of Arizona SB 1070, which criminalizes undocumented immigrants.

''This new law, although limited to the State of Arizona, could have impact throughout the nation, in terms of how members of our immigrant communities are both perceived and treated,' Bishop Wester said in the statement. 'SB 1070 gives law enforcement officials powers to detain and arrest individuals based on a very low legal standard, possibly leading to the profiling of individuals based upon their appearance, manner of speaking, or ethnicity.'

'Bishop Wester called SB 1070 'symptomatic of the absence of federal leadership on the issue of immigration' and called for 'the Administration and Congress to work in a bipartisan manner to enact comprehensive immigration reform as soon as possible.''

That's the position of the Church bureaucracy in the U.S. But what about the position(s) of priests "in the trenches," so to speak?

I asked Father Angel Sotelo of the Diocese of Fresno for his take on the new law. He responded (edited):

"The Catholic faithful should be careful not to accept this change merely on the basis of their anger towards those who are in this country illegally. The Word of God clearly states that our anger and frustration with illegal aliens must be tempered with a respect for their persons  'You shall not mistreat the alien in your midst'  and charity (Jesus praised the Good Samaritan, who was an outcast and despised as an alien to the Jewish people)."

Father Sotelo says that Catholics should also be concerned about giving police "more sweeping power" while thinking only the "bad guys" will be punished.

"The police have enough discretionary power in this country  power that can easily be abused, and we Americans have always been leery of expanding this power. Perhaps down the line police will follow your car as you drive away from a pro-life rally, stop you, and ask for documents."

He warns that "the more invasive people picture the police to be ... the less they will cooperate with them when they investigate violent crime and need to quickly apprehend suspects and criminals."

Father Sotelo concludes: "Catholics on both sides can be guilty of the 'My party before my faith' mentality. We should ask the following questions: Can this law be applied equally to all, or will it fall into a form of racial profiling or other form of abuse? Can the law be enforced without severe disruption to families and children? Can this law be enforced without causing unnecessary contempt for the police and respect for due process of law? Will the law cause people to be deported who are making an important contribution to their community and who perhaps have a legitimate cause for legal residency?"

Father James Farfaglia of the Diocese of Corpus Christi appears to disagree  at least somewhat.

Father Farfaglia wrote on his blog (slightly edited): "The ongoing hysteria about the new immigration law in Arizona is crazy. I have another view: Everyone has a right to immigrate to any country, but people have to come into a particular country legally. Every country and every state has a sovereign duty to enact laws for the political, economic and social order of the common good."

Father Farfaglia, who speaks fluent Spanish and celebrates a Mass in Spanish every Sunday, worked in Mexico for six years and "had to go to the immigration office every year" to renew his visa, "which was not cheap to do."

The main problem, he wrote, "lies in the fact that so-called unskilled laborers, for the most part, are not allowed to enter into our country legally. This is where the real injustice lies. This is where the American bishops, the politicians and the mainstream media need to be focusing their attention.

"Let people come into our country, but legally, with their papers in order. Everything else is just smoke and mirrors."

And on the hot-button issue of illegal immigration, Father Patrick Bascio has authored a book titled On the Immorality of Illegal Immigration. Father Bascio was interviewed by Dexter Duggan of The Wanderer. The following is an excerpt of said interview (the full interview can be read here):

'Why do you think a Catholic priest's book on the immorality of illegal immigration is needed? Do you think your experience as a priest gives you a special perspective?

'A. I believe that a book on the subject from a priest is badly needed. My experience is that there is universal belief on the part of the average Catholic Christian that since the American bishops have, at times, approved of the demonstrations [about illegal immigration] to the point of sometimes advising their priests to break the law and give illegals sanctuary, that this must be the official position of the Church. 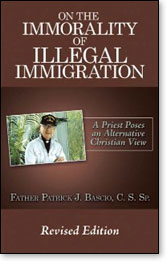 'However, the Vatican has made clear that although it wishes bishops to assist any immigrant with special care, since they are usually very poor and dislocated, it also has made clear that this assistance must always be within the laws of the host nation.

'Q. You have worked with poorer people in other countries. How did your pastoral background assist you in addressing the argument that large-scale illegal immigration must be accepted or encouraged because it helps the poor from other countries?

'A. Helping the poor from other countries must be placed within the context of the larger picture of justice for all peoples. If we approach the problem in that way, we cannot rule out  indeed we must rule in  the fact that for every person from a foreign country who finds work in the United States, an American loses that job.'