October 1, 2010
The Notre Dame Fighting Irish football team is 1–3 so far this season. Not exactly what Notre Dame fans were hoping for, particularly with new head coach Brian Kelly.

Veteran and über-dedicated pro-life activist Jim Finnegan, a Notre Dame alum, isn't too upset about the team's performance, but he's quite sad that his alma mater has become increasingly modernistic over the last few decades, culminating with the 2009 honoring of President Obama, arguably the most pro-abortion U.S. president to date.

Finnegan half-jokingly says the football team might be suffering from the Obama curse.

"For years I got a laugh out of the remarks from many of the sports writers and supporters of the teams Notre Dame was playing that both the 'luck of the Irish,' and especially the Lord himself, were causing the fortunate fumbles, penalties and dropped passes from the opponents," Finnegan says. "And that the Lord Himself, wanting Notre Dame to win, somehow made sure the opponents' field goal or touchdown was miraculously stopped.

"After all, 'Touchdown Jesus,' on the front of the school's library, was appearing over the stadium itself. God's intervention was often credited."

But that hasn't been happening as of late. "Surely, the Obama curse has begun, and continues to grow," Finnegan says, "along with deepening despair, as the curse hovers over the Notre Dame stadium." 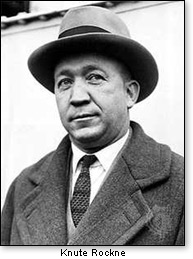 Despite this curse — brought about by Notre Dame President Father John Jenkins' apparent desire for human respect and a seat at the Obama table — Finnegan is very hopeful that there will be a spiritual awakening at the university.

"We know the ending. The long-departed Knute Rockne will return in spirit to once again ask that they win one for the Gipper, except this time it's for the Mother of God. Notre Dame will again become what Father Sorin founded it to be: a Catholic university fulfilling its duty to be good shepherds of the student flock. The Obama curse will then be over ... and good riddance to that."

In a related item, the ND88 case continues to move forward.

According to the Chicago-based Thomas More Society, a St. Joseph County circuit court judge ruled that attorneys from the pro-life law firm may depose a former official recently fired by Notre Dame — a key ruling for the defense in the case of the ND88, the 88 pro-life demonstrators arrested at the university for protesting President Obama's receiving honors at the commencement ceremonies in 2009.

Chief Judge Michael Scopelitis ruled that William Kirk, former associate vice president for residential life at the university, may be deposed by the Thomas More Society's special counsel, Tom Dixon, about the decision to arrest and prosecute the pro-lifers. A motion by the prosecution to quash the deposition was overruled, and Judge Scopelitis will pass on any objections arising during the deposition, as he stipulated that it must take place at the St. Joseph County Courthouse.

"This represents a major victory for the defense, and perhaps even a decisive turning point in this case," said Tom Brejcha, the Thomas More Society's president and chief counsel.

At a recent hearing, Dixon argued that the deposition should not be quashed, as Kirk's testimony would likely shed new light on why Notre Dame had treated the pro-life demonstrators much more harshly than other protest groups in the recent past.

To wit: In January of this year, homosexual-rights activists demonstrated on campus without an allegedly requisite written permit, yet the university did not file charges against them. Ditto with regard to some anti-ROTC activists. But the 88 pro-life demonstrators were arrested, jailed, charged with trespass and prosecuted.

The Thomas More Society has argued that the ND88 were not criminal trespassers but victims of "viewpoint discrimination," a violation of the First Amendment, which applied to Notre Dame's security police as they exercised statutory arrest powers vested in them under Indiana state law.

Judge Scopelitis will set a date for the deposition in the coming weeks.