October 9, 2010
The following is a message from Father Richard Perozich, a priest of the Diocese of San Diego: 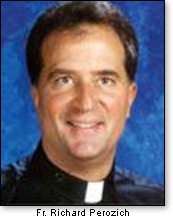 Elections are coming up November 2, 2010. Catholics must engage in the political process to form a nation that reflects the values held by Christ's followers. Learn who you are and act like a Christian. 1 Peter 2.9 But you are "a chosen race, a royal priesthood, a holy nation, a people of his own, so that you may announce the praises" of Him who called you out of darkness into his wonderful light.

Your job is to announce to the whole world that Jesus is the anointed King of God's everlasting reign — and to offer all men His salvation given by grace and received by faith. One forum in which you do this is politics. Politics comes from the words pole and polarity. Poles are opposite ends of an idea, of a temporal structure, or of a force.

Catholics, even though we live in a country and are citizens of that country, have a higher calling and responsibility to God and to our neighbor to promote God's truth even when others hate it, reject it, and hate us for proclaiming it. We are citizens in an earthly realm, but more importantly we are citizens of the new kingdom of heaven with Jesus as the Lord, His laws as our prime way of life, and called to live them and to promote them even to unbelievers.

We live in a society where many people with power, possessions, and prestige are promoting ideas that are not founded in Christ. In order to promote their ideas over ours, they tell us we must stay in our churches, keep our religion to ourselves, and that their idea of separation of the church from the state (which does not exist in our American Constitution as they say it does) trumps any ideas we might have, so we have to shut up.

And Catholics sheepishly keep quiet and vote for men and women who promote evil.

In chapter 3 of Galatians, St. Paul, frustrated with the Galatians allowing non-believers to silence the truth even to the point of the Galatians returning to pagan or evil ways chastises them saying, "O stupid Galatians. Who has bewitched you?"

It can be said of us in America in the year 2010, "O stupid Catholics, who has bewitched you?" We easily go over to pagan ideas, putting aside our faith, our truth, in order to accommodate the evil of people who will not accommodate us! To promote their ideas they attack us personally calling us the far right, ultra-conservative, bigoted, homophobic, hate mongers, holy rollers, and other epithets. This silences many Catholics. It only emboldens me, and it should embolden you also to promote your faith.

In the fights in politics, all sides cannot win. It is either going to be the way of evil or the way of truth. You must engage it as an ambassador for Christ and not as an agent of the devil. God is life. Jesus is King. Christians are citizens of the kingdom sharing in life, the mission of God to promote it constantly in every forum.

People are most concerned with their economic power to purchase, to live, to save. Their greatest fear is losing this, evident in how they voted in 2006 and 2008. For Christians our greatest concern should be with life, and we vote for those who promote it. You have heard the mantra, "I'm a fiscal conservative, but a social liberal." Nonsense. The societal responsibilities come first, and from a sound society built on biblical principles flow the economic concerns.

In a healthy economy there will be rich people. I who earn $20,000 a year do not envy their wealth, their homes, their power to shape the economy. The people Americans put into office in 2006 and 2008 do envy, and are using the economy to tear apart the entire social fabric of society to promote abortion here in our country and abroad; to kill new life in embryos; to kill the elderly and sick; to destroy the nature of gender and marriage; to allow sexually-immature people to be predators of others to try to satisfy their lack of psychological development.

For us Catholics, the basic issues are: Life from conception to natural death, that is, protection of the unborn, those with life, and those who are sick; protection of new life in its most nascent form, the embryo; protection from cloning to farm body parts; protection from sexual deviance in the form of pederasty, homosexuality, adultery, fornication, prostitution.

An elite class has assumed power in the United States, transcending political parties. They claim to know more than the people the elites represent. They do not. Their interest is keeping their positions in which they earn upwards of $200,000 with a health plan that is not part of the new one passed for the rest of us. They plan the destruction of the military, the silence of the churches and free voices, the destruction of children, embryos. They simply cannot stay in power. I have voted for some of them despite their mixed policies.

But enough! I refuse to cast a vote for anyone who supports abortion, sexual confusion to be forced in the military, marriage, school curricula, or any other societal aspect, cloning, embryonic stem cell research, or euthanasia. I am a Catholic. I am a citizen of the kingdom of God and will promote that kingdom in all parts of my life.

I am checking your voting records through various organizations which monitor your voting. If you do not promote life from the moment of conception to natural death, chastity and sexual distinctions, traditional marriage, respect for embryos in science, then you will not get my vote. You do not belong in political office. Teachers who sheepishly follow their corrupt unions do not belong in the classrooms. Clergy who follow non- Christian teaching do not belong in the pulpit.

My hope rests in Jesus Christ and His salvation exactly from the very things these politicians are promoting. Change is repentance from sin, conversion to God, and reparation of the damage by following the Commandments without relativizing them.