November 16, 2010
The following is a guest commentary by Leticia Velasquez, co-founder of Keep Infants with Down Syndrome (KIDS).

"The mentally disabled: words and meaning"

By Leticia Velasquez
The other day, I was reading a post on the Facebook page of Dr. Brian Skotko, a pediatrician at Children's Hospital in Boston, and a prominent advocate for individuals with Down syndrome. In it, he praises President Obama for signing an executive order banning the use of the words "mental retardation" in evaluations of individuals who are mentally disabled. Dr. Skotko is on the board of National Down Syndrome Society, has authored positive books on Down syndrome such as Fasten Your Seatbelt: A Crash Course on Down Syndrome for Brothers and Sisters. 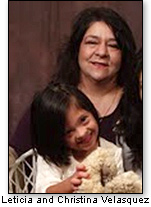 The good doctor has a sister with Down syndrome and has offered invaluable support to those who, like me, love someone with an extra chromosome. It was the research of Dr. Skotko which firmly established the statistic of a 90 percent abortion rate for children with Down syndrome, and for this I owe him my gratitude. This tragic statistic, when published in the Wall Street Journal, spurred Senators Kennedy and Brownback to reach across the aisle and sponsor the "Prenatally Diagnosed Conditions Awareness Act" which gives $5 million a year to groups who help educate parents whose unborn babies are diagnosed with Down syndrome and other disorders.

This funding helps to offer them up-to date-ideas of what their children's lives will be like, to offer support groups, and adoptive parents. Dr. Skotko had the best intentions in celebrating the retirement of the term "mental retardation." Yet, in this matter, I beg to differ with his approach. Changing what we call those with cognitive delays will not significantly improve society's view of them unless their very right to exist is respected first. We have to attack this basic violation of their human dignity before we address the terms used to describe their challenges.

When I was working in London in the 1980s, I remember being shocked by the name on a building near my home. It was called "The Spastic Society." In the U.S., we had long before ceased calling those with cerebral palsy "spastics" and I found the term antiquated and offensive. It seems that every few decades, old terms for those with physical disabilities or, cognitive delays are abandoned in favor of new ones, since existing terms have developed a negative connotation. So too with those who have Trisomy 21, or Down syndrome.

Dr. Langdon Down, an English psychiatrist, first identified Down syndrome, calling it Mongolism, since he saw a similarity between the almond eyes characteristic of Trisomy 21 and those who lived in Mongolia. Somehow, no matter where a child was born, he assumed these people shared a racial tie to this region. Although Dr. Down was compassionate toward those with disabilities and the term was never intended as an insult to those from Mongolia or those with Trisomy 21, over time, it became an offensive term. Mongolism was abandoned in favor of Down syndrome after Dr. Down. Now, some of my friends in the Down syndrome community want the more accurate term Trisomy 21 to replace Down syndrome, since it too has acquired a negative connotation.

Again, this is the wrong issue. Changing vocabulary, while significant, can only get you so far. As a writer who is also active in the pro-life movement, I understand the importance of words. Calling an unborn child a fetus, while medically accurate, can depersonalize the argument allowing for members of the public to rationalize abortion in the same way that calling certain members of society "useless eaters," "vermin" and "life unworthy of life" eventually depersonalized entire classes of people, including the mentally retarded, and sent them to their deaths in the Nazi concentration camps.

However, my point is this: If an entire class of people, those with three sets of the 21st chromosome, are routinely targeted for destruction, at a scandalous rate of 90 percent, can merely changing the term we use to describe those 10 percent who escape the net increase respect for their human dignity and intrinsic value to society in a meaningful way? Isn't a more fundamental change required before having a child with Down syndrome goes from the greatest fear of pregnant women to a widely accepted member of society?

The idea that only 10 percent of people prenatally diagnosed with this disorder make it to birth, but if they do, they may not be called "mentally retarded," rings hollow to me. It's as if we are rescuing survivors of the death camp, offering them freedom and food, but failing to shut down the gas chambers for the rest of their race. Can any significant respect be ever given to those with Down syndrome when those who call themselves advocates ignore this ignominious irony?

I would prefer my daughter be called a 'retard,' a pejorative term I abhor, and know that the abortion of babies with Down syndrome had ceased. For then, society would stop the window dressing and offer people with a unique number of chromosomes the dignity they deserve. This is the only way that true respect for these persecuted members of our society can be established. For it is only by living fully integrated lives in society and becoming an everyday sight will society cease to reject them.

Whenever I travel in certain circles with my eight-year-old daughter Christina, who has Down syndrome, she creates a stir. Heads turn to confirm what people think they saw, and then the light of recognition dawns, as they interiorly affirm, "Yes, that was a child with Down syndrome." The process doesn't bother me unless the discovery is accompanied by a look of disgust. I never see that reaction from children; they are merely curious.

One time, a couple of preschool brothers ran to their mom after meeting Christina, exclaiming in animated stage whispers, "Mom, we met a little girl who is Chinese: She looks Chinese and doesn't speak English!" She tried to shush them with a worried glance at me, and I calmly assured her that I wasn't offended since the boys were just trying to make sense of her uniqueness. This may be the first time they ever encountered a child with Down syndrome. They are pretty rare in the U.S.

Recently, an American psychiatrist traveled to Ireland and was puzzled by the fact that he saw many more children with Down syndrome in the population than he was accustomed to seeing. He noticed how they were integrated into everyday activities and marveled at how they were casually accepted in everyday life. Upon investigation into this rare phenomenon, he came upon a surprising fact: Abortion is illegal in Ireland, so the 90 percent abortion rate of babies with Down syndrome, which has virtually extinguished the population in Western society, is not operating. The Irish don't do a double take for children like Christina. In fact, they are debuting a cartoon on Irish TV whose main character, "Punkie," is a little girl with Down syndrome. It will be included among the ordinary children's programs.

Imagine if, overnight, we stopped aborting babies with Down syndrome. Soon, preschools would have the typical number of children with the characteristic almond eyes my daughter has, and children wouldn't have to tug at their parents' sleeves when they see her and ask embarrassing questions. Programs customized to their learning style would flourish, as their growing numbers justified their creation. When adults with Down syndrome took their place in the world, their accomplishments wouldn't surprise us and make the news. Like the young man who just scored a 51-yard touchdown for his high school football team, which was featured on Fox News, or the young couple, Monica and David, a couple with Down syndrome whose marriage story was made into an award- winning documentary.

Such events would become too commonplace to amaze us. Research funding to overcome the challenges posed by Trisomy 21 would increase, and eventually, their health challenges would be overcome by science. The cure for more common diseases, such as Alzheimer's and cancer, may well be found along the path to pursuing this promising research. Our society would find itself a more welcoming place for those who are genetically diverse and would congratulate itself for overcoming the bigotry of the past, as we did when, two decades ago, we offered such people access to education with the Individuals with Disabilities Act.

These are precisely the changes that my friends in the advocacy movement are encouraging through use of the media and Down syndrome organizations. Their goals would find ever more success if children with Down syndrome were not viewed as the worst thing that could happen to a family. And so, as part of the movement to provide a welcoming culture for those, like my eight-year-old Christina, with Down syndrome, I say: Do not ignore the elephant in the room.

We can't ignore the abortion rate while insisting that our children are addressed in respectful terms and expect fundamental changes in society. We must attack the problem at its root — where our children are fundamentally rejected for who they are — and not respond with shallow window dressing. Then, pejorative language will fade away, without any legislation needed, as the amazing personalities and unique sensibilities of our children enrich society.