November 17, 2010
Get this: A 33-year-old murderer, Justin Boulay, walks out of prison after serving only 12 years and plans to move to Hawaii with his wife, Rachel Rivers Boulay, an assistant professor of medicine at the John A. Burns School of Medicine at the University of Hawaii.

According to a Nov. 15 story in the Chicago Tribune: 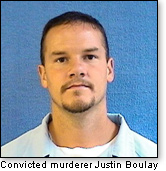 Justin Boulay ... was a 20-year-old student at Eastern Illinois University in Charleston when he strangled ... 18-year-old [Andrea Will], his former girlfriend, with a phone cord in his apartment near campus on Feb. 2, 1998. Will, also a student at Eastern, had ended their relationship in December 1997....

After killing Will, Boulay phoned his parents and confessed. He pleaded temporary insanity but was convicted of first-degree murder. When Judge Ashton Waller in May 1999 sentenced Boulay to 24 years in prison, a sobbing Rosenberg said the punishment showed 'that more value was placed on his life than my daughter's.'

Almost a dozen years later, Rosenberg said, 'for myself and my family, it has been a complete and total injustice since the day he was arrested. It's just such a slap in the face.'

Boulay was sentenced when Illinois' law allowed a day cut from the sentence of an inmate for every day of good behavior. Truth-in-sentencing laws since then require those convicted of violent crimes to serve at least 85 percent of their sentences.

That Boulay wasn't given a life sentence — and is now a free man — is an outrage. Justice has not been served.


News that New York Archbishop Timothy Dolan (and not Bishop Gerald Kicanas) was elected the new president of the U.S. Conference of Catholic Bishops is both a surprise and a relief.

Archbishop Dolan, according to a Nov. 16 story on LifeSiteNews.com, "has a solid reputation as an outspoken pro-life leader. He has insisted that Catholics should never honor anyone taking a pro-abortion position, and he was a strong opponent of Notre Dame's decision to honor President Obama at their 2009 commencement. This fall, he joined the bishops of New York in calling on Catholics to make the right to life their primary concern at the ballot box."

Archbishop Dolan's election is not entirely without controversy — see here, here and here — but, all things considered, I'd much rather have him as USCCB president than Bishop Kicanas.