November 30, 2010
I asked priest-author Father John Trigilio Jr., president of the Confraternity of Catholic Clergy — and one of my favorite priests to quote in this column — to weigh in on the morality of what WikiLeaks has been doing as of late. Father's response (slightly edited) is as follows:

Treason used to be a capital crime in every nation. Betraying your nation by divulging state secrets, whether for money, revenge or for political motives, is always grave matter for the common good of an entire country. National security demands that there be secrets kept from the enemy. 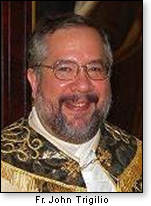 Secrets in and of themselves are not antithetical to the truth. The Catechism of the Catholic Church teaches us that the right to the communication of the truth is not unconditional. This requires us in concrete situations to judge whether or not it is appropriate to reveal the truth to someone who asks for it. Not everyone has a right to know everything. While one is never morally permitted to lie, at the same time, I may be obligated to withhold information from someone who has no right to know it. In such cases I either keep silent, or I use mental reservation, especially when any harm to innocent people could result by my disclosure of certain facts to those who have no moral right to them.

The Angelic Doctor makes the point in his Summa that there are natural secrets and professional secrets. Natural secrets are basically the non-criminal, embarrassing facts of a person's life, personal communications between family and friends, and personal diaries and journals — and they're no one else's business, unless keeping them secret will result in grave harm to others. Likewise, professional secrets, such as doctor-patient and lawyer-client confidentiality, are to be respected.

National secrets that protect the country from enemies and adversaries are just as confidential. Whistle-blowing is not treason, for it is not divulging legitimate secrets but exposing criminal activity. Whistle-blowing, whether it involves the Church or the state, can be obligatory if grave harm and injury are immanent. Like fraternal correction, however, it must be done properly. Respecting chain of command before going to the media gives moral leaders a chance to exercise moral leadership and correct subordinates. When that fails, going public may be the only remedy, but it should never be the first option. Political and military secrets have greater implications since disclosure of certain facts may endanger innocent lives. Friends and allies depend on confidentiality; otherwise they will become indifferent or, worse, potential adversaries.

The WikiLeaks phenomenon is not equivalent to the press exposing the White House cover-up in the Watergate break-in. Revealing details of confidential communications between foreign governments, estimations and opinions of State Department or Defense Department officials is not serving the common good or preventing immanent and grave harm or injury. If any federal or international laws have been broken, the facts should have been disclosed to the proper authorities.

Leaking details, volumes of it, to the media via the Internet or any other method is nothing more than a form of gossip. I do not have a natural or professional right to know everything the government or military does, but if any person or group breaks the law or threatens the common good, then as a citizen I have a right to know and have a right to expect a remedy. Remember, too, that detraction is the sin of exposing the sins of others, not with the hope of repentance, but to humiliate and embarrass the other.

What good is served when every detail is revealed? More harm in terms of mistrust, anger, confusion, uncertainty, doubt and fear are created when so much information is capriciously exposed. What if everyone's income tax return were made visible online to anyone who had access to the Internet? Politicians relinquish their income tax confidentiality when they run for office, but private citizens are supposed to be protected in their confidential matters.

Embarrassing information is not the same as criminal information. The former is not everyone's business; the latter is the business of law enforcement and the general public when nothing is done to prevent or remedy such activity. Embarrassing politicians may be entertainment to some people, but it is not sufficient reason to sacrifice national security. The FBI, CIA, NSA, et al. have a moral right to keep certain facts and knowledge secret from the public. There is a reason for having security clearance levels. Keeping an enemy, such as al Qaeda, in the dark on details which, if known, could endanger hundreds, thousands or even millions of innocent lives is a moral imperative and not an option.

Hacking into military computers may be a rush for computer-geek teenagers, but leaking confidential national secrets is tantamount to treason. Whatever the motive, the act is criminal and immoral. Disclosing only criminal activity is morally permitted and necessary at times. Anarchy is as much a national security threat as is spying for the Russians or Chinese.

Sabotaging friendly relations between the U.S. and our allies, humiliating our leaders and embarrassing our personnel is nothing less than supplying aid and comfort to the enemy. It should be punished with a fine and imprisonment. If any real crimes were committed, the attorney general should have been contacted — not an exposé on the Internet. Risking the lives of agents and informants, and risking the dissolution of friendly relations with amiable countries, just to gain publicity or serve a private agenda ... is wrong.