January 25, 2011
It made Catholic news headlines in recent days when Bishop Athanasius Schneider, an auxiliary of the Diocese of Karaganda, "suggested the preparation of an authoritative document to expose major errors in the interpretation of the teachings of Vatican II."

According to Catholic World News (click here for the full news item):

'[Bishop Schneider] argues that the Church has been damaged by inaccurate interpretations of the council documents, which suggest 'an anthropocentric, secularizing, or naturalistic shift by the Second Vatican Council' and a dramatic break from previous Church teachings. Bishop Schneider says that the teaching of the Church has been distorted because of secular influences and because too many Church leaders failed to uphold traditional teachings. The result, he says, is a widespread misinterpretation of conciliar teaching....'

'The response to my last story prompted me to telephone Bishop Schneider in Kazakhstan. He is extremely courteous and speaks very good English. The auxiliary bishop is also a member of the Canons Regular of the Holy Cross, a medieval religious order. 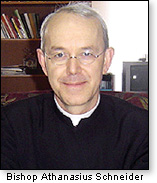 'Bishop Schneider pointed out to me that in addition to Lima and Bologna, retired Bishop Juan Laise of the Diocese of San Luis in Argentina also banned the practice of Communion in the hand, but this was before Dominus Est was written. In addition, the Kazakh episcopal conference made a decision two years [ago] to restore Communion on the tongue as the sole way in all the dioceses there.

'Most importantly, Bishop Schneider said to me that his address [should] give no comfort to those who want to minimize the importance of the Second Vatican Council (by commenting that it is only a pastoral council, etc.) and disagree with some of its contents on the proviso that it is a rupture from previous Church teachings.

'He said Catholics have an obligation to be loyal to the Church's Magisterium and not selectively discount those statements they are not in agreement with. His concern has been the erroneous application of the council documents and the need for the Church to outline what the wrong conclusions are so they can be opposed explicitly. But that is a different thing from saying Vatican II doesn't have to be adhered to.'