February 7, 2011
The following is a brief interview with a priest who's the official exorcist of a Midwestern diocese. He wishes to remain anonymous. 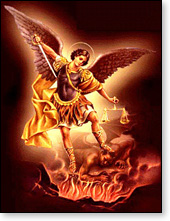 1) When were you ordained, and when were you assigned the role of exorcist for the Diocese of [redacted]?

"I was ordained a priest on May 9, 1979 and have served at various times as associate pastor, pastor, director of the Hispanic Apostolate, vicar for deacons, director of the Office of Divine Worship, director of communications, and now 'stable' exorcist (as opposed to exorcist 'ad actum,' which means the exorcist receives permission to do an exorcism on a case-by-case basis.) I was made exorcist 'ad actum' on March 8, 2010 and on November 3, 2010 given the office in stability."

2) Have you witnessed any preternatural phenomena, such as objects moving or floating in an unexplainable fashion?

"Nothing of the poltergeist-type phenomenon, but many, many examples of other preternatural phenomenon, from mysterious scratches, to cold spots, to the demons having occult knowledge, superhuman strength, knowledge of foreign languages, and so on. Also, of course, in most instances the aversion to the sacred. One very frightening phenomenon is the physical change in the appearance of the possessed person, which can go from being a kind of hardening of the person's features, to that person actually appearing like an animal."

3) How do you think Catholics should live their faith?

"Obviously, one should frequent the sacraments — especially Confession and Communion — pray every day, and cultivate a loving and fruitful relationship with Our Lord, Our Lady and the saints. In addition, one should do a regular (daily) examination of conscience, with prayers that the Holy Spirit might enlighten us to any secret sins.

"It goes without saying that Catholics should avoid any contact with the occult, Ouija boards, magic crystals, New Age practitioners, anything having to do with Wicca, witchcraft, or even the Goth movement. Also, we need to be conscious of Christ's command to forgive others. We need to forgive those who harm us and practice charity to those who have hurt us. We have to be very, very careful not to nurse grudges or slights, or hold on to anger or refuse to forgive others for their crimes against us. All this is what we should be praying for daily."