February 27, 2011
There's been a lot of discussion in certain circles on the topic of President Obama's "eligibility." (Incidentally, Dr. William Oddie cogently argues in a recent commentary that Obama is an enemy of the Catholic Church. Click here to read it.)

Charles E. Rice, professor emeritus at Notre Dame Law School — and author of the book What Happened to Notre Dame? — argues that it's "time for a new approach" on the eligibility controversy. His essay is reprinted below (with very slight editing). 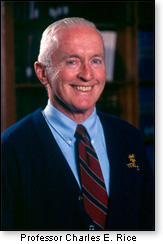 The speculation about President Obama's eligibility goes on and on, with no reliable access to the truth and with no end in sight. It is time for a new approach.

The Constitution provides: "No person except a natural born Citizen, or a Citizen of the United States, at the time of the adoption of this Constitution, shall be eligible to the Office of President." Art II, Sec. 1. Neither the Constitution nor any federal law defines the term "natural born citizen." Nor has the Supreme Court provided a definition that covers the questions presented in the Obama case.

In Minor v. Happersett, in 1875, the Supreme Court, made an incidental reference to the issue: "[N]ew citizens may be born or they may be created by naturalization. The Constitution does not, in words, say who shall be natural-born citizens. Resort must be had elsewhere to ascertain that. At common-law, with the nomenclature of which the framers of the Constitution were familiar, it was never doubted that all children born in a country of parents who were its citizens became themselves, upon their birth, citizens also. These were natives, or natural-born citizens, as distinguished from aliens or foreigners. Some authorities go further and include as citizens children born within the jurisdiction without reference to the citizenship of their parents. As to this class there have been doubts, but never as to the first." 88 U.S. 162, 167-68 (1875).

The Obama "Fight the Smears" website has published a digital photograph of a short-form "Certification of Live Birth" issued by the Hawaiian Department of Health that lists his place and date of birth as Honolulu on August 4, 1961. At that time, Hawaii's practice was to issue also a long-form Certificate of Live Birth which contains more information, including the name of the hospital, or address of the place, where the birth occurred; the identity of the physician or other "attendant" at the birth; and the signature of the parent or other 'informant" certifying the accuracy of the information, etc. Obama has not given the permission required by Hawaiian law for release of that long-form certificate.

Numerous lawsuits challenging Obama's eligibility have been rejected by every court involved, including the Supreme Court of the United States. Some are still pending. The rejections have been based on various grounds, including the plaintiff's lack of standing to sue and other specified and unspecified procedural grounds. No court has agreed to decide any of those suits on the merits.

The lawsuits have presented a bewildering array of claims, including, among others, that: Obama was born, not in Hawaii, but Kenya; if he was born abroad, his mother, an American citizen, was legally too young to confer that citizenship on him at birth; the Hawaiian short-form certification of birth published on the Obama website is a forgery; that short-form certification could have been legally issued in 1961 to certify a birth occurring elsewhere than Hawaii; Obama is ineligible because, wherever he was born, he had dual-citizenship since his father was a British citizen and the British Nationality Act of 1948 made his son a British citizen at birth; Obama identified himself as a foreign student at Occidental College, Columbia University, and Harvard Law School; when Obama traveled to Pakistan in 1981, he did so on an Indonesian passport at a time when Indonesian law forbade dual citizenship, etc., etc.

There is no reason to analyze those lawsuits here in detail. Their lack of success cannot be ascribed simply to a hyper-technical evasion of judicial responsibility. For example, the rule requiring a plaintiff in a federal court proceeding to have a sufficient personal interest, or standing, to bring the suit provides needed assurance that suits will be seriously contested and will seek more than merely advisory opinions. On the other hand, it is fair to say that the Obama controversy involves significant issues of fact and law that deserve some sort of official resolution.

I suggest no conclusion as to whether Obama is eligible or not. But the citizens whom the media and political pundits dismiss as "birthers" have raised legitimate questions. That legitimacy is fueled by Obama's curious, even bizarre, refusal to consent to the release of the relevant records. Perhaps there is nothing to the issues raised. Or perhaps there is. This is potentially serious business. If it turns out that Obama knew he was ineligible when he campaigned and when he took the oath as President, it could be the biggest political fraud in the history of the world. As long as Obama refuses to disclose the records, speculation will grow and grow without any necessary relation to the truth. The first step toward resolving the issue is full discovery and disclosure of the facts.

The courts are not the only entities empowered to deal with such a question. A committee of the House of Representatives could be authorized to conduct an investigation into the eligibility issue. The classic formulation of the Congressional role is Woodrow Wilson's, in his 1884 book Congressional Government:

It is the proper duty of a representative body to look diligently into every affair of government and to talk much about what it sees. It is meant to be the eyes and the voice, and to embody the wisdom and will of its constituents. Unless Congress have and use every means of acquainting itself with the acts and the disposition of the administrative agents of the government, the country must be helpless to learn how it is being served; and unless Congress both scrutinize these things and sift them by every form of discussion, the country must remain in embarrassing, crippling ignorance of the very affairs which it is most important that it should understand and direct. The informing function of Congress should be preferred even to its legislative function...[T]he only really self-governing people is that people which discusses and interrogates its administration. (p. 198)

Wilson later retreated from his affirmation of Congressional supremacy. He said in 1900 that the President, rather than Congress, "is now at the front of affairs." (Congressional Government, preface to 15th edition, 1900, p. 22.) In his 1908 book Constitutional Government in the United States, four years before he was elected to that office, he described the president as "the political leader of the nation." (pp. 67ff.) Wilson's second thoughts on congressional supremacy, however, do not negate Congress' "informing function." The investigatory power has remained as an essential role of Congress.

The Constitution nowhere expressly grants to either House of Congress a general power to investigate in aid of legislation, or in aid of overseeing the Executive Branch. However, the Supreme Court has long recognized that such a power is implied as an essential concomitant to Congress's legislative authority. John E. Nowak and Ronald D. Rotunda, Constitutional Law (2004), 280. See McGrain v. Daugherty, 273 U.S. 135 (1927).

The investigative power of Congress has multiple purposes. "The ability to gather information has been regarded as a predicate to effective legislation and as important to providing a legislative check on executive actions. The Supreme Court has explained that Congress thus may conduct 'inquiries concerning the administration of existing laws as well as proposed or possibly needed statutes. It includes surveys of defects in our social, economic or political system for the purpose of enabling the Congress to remedy them.' The power to investigate also includes 'probes into departments of the Federal Government to expose corruption, inefficiency or waste'..... The authority to investigate necessarily requires the power to compel testimony." Erwin Chemerinsky, Constitutional Law (2006), 310. (Internal citations omitted).

It is difficult to imagine, to borrow Wilson's phrase, a more pressing "affair of government" than the question of whether a sitting President obtained his office illegally, and perhaps even by fraud. An investigating body must not prejudge the case. Its concern must be, first, to put the facts on the record and then to consider whatever legislation or other remedy might be appropriate in light of those facts.

The House of Representatives is an appropriate body to inquire into the facts and legal implications of a President's disputed eligibility for the office. The House itself has a contingent but potentially decisive role in the election of a president. The Twelfth Amendment to the Constitution governs the counting of the electoral votes as certified by the states:

The President of the Senate shall, in the presence of the Senate and House of Representatives, open all the certificates and the votes shall then be counted; — The person having the greatest number of votes for President, shall be the President, if such number be a majority of the whole number of Electors appointed; and if no person have such majority, then from the persons having the highest numbers not exceeding three on the list of those voted for as President, the House of Representatives shall choose immediately, by ballot, the President. But in choosing the President, the votes shall be taken by states, the representation from each state having one vote; a quorum for this purpose shall consist of a member or members from two-thirds of the states, and a majority of all the states shall be necessary to a choice.

The power to investigate can be exercised by a House committee provided that the investigation is within that committee's authorization as determined by the House. An investigation into Obama's eligibility by a committee or subcommittee of the House could have several legitimate objectives, including among others:

1. To ascertain the facts, compelling by subpoena the production of all the available records relevant to Obama's eligibility, including the complete Hawaiian records of his birth; his passport records to ascertain whether he traveled to Pakistan in 1981 on an American or other passport; the records from Occidental College, Columbia University and Harvard Law School to determine whether Obama described himself as a foreign student; and such other records as may be relevant. The disclosure of such information to the public would be an appropriate exercise of Congress' "informing function."

2. The consideration of legislation to require candidates for a federal elective office to produce, at an appropriate time, evidence of their eligibility for that office. There is now no federal law or regulation that requires such disclosure.

3. The consideration of legislation to define the constitutional term, "a natural born Citizen."

The American people do not know whether the current President achieved election by misrepresenting, innocently or by fraud, his eligibility for that office. I neither know nor suggest the answer to that question. But it would be a public service for the House of Representatives to employ its authority to determine those facts and to recommend any indicated changes in the law or the Constitution.