March 7, 2011
In past columns — here, here and here — I reprinted substantial excerpts from Catholic attorney and scholar Peter B. Kelly's "factional" novel Cleansing Fire. Kelly was friends with the late Father Charles Fiore, who died of natural causes in 2003, and Father Alfred Kunz, whose 1998 murder remains unsolved. (Although there's been no arrest in the case, investigators reportedly have at least one person of interest who they've been monitoring for the last several years.) Both priests were traditional and were all too aware of the corruption in the Church.

Below is another substantial excerpt from Cleansing Fire. To order the book, click here. 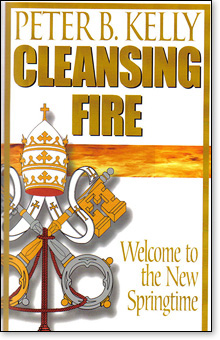 The line of people for confession and the time necessary for communion grew each Sunday at that store site. Father Antonio was pleased with the growing crowd despite the fact that the poorly-lit other corner of the one floor department store did not make a particularly inspiring chapel. The folding chairs were allowed to remain throughout the week and the empty shelving units were tastefully placed and draped with clean white sheets to form the back of the makeshift altar several of the men constructed. The deacons saw to it each week that everything was properly placed and that the altar was ready for Mass while Father took more and more time for confessions.

Both of these young men were frustrated and angry, but not surprised, at the Bishop for his willingness to close down the nearby parish of these struggling people rather than let it fall into the hands of the "Traditionalists." Once the Novus Ordo parishioners, with their birth- controlled families, began to age and, as did their limited, uncatechised children, gradually stopped attending Mass at the local parish, Father Antonio had requested the opportunity to use the virtually abandoned old church building for scheduled Sundays and holydays. He also offered to return the entire collection to the Bishop after each Mass. Given the increasing size and generosity of the attendees at the Latin Mass, that would have easily paid for the cost and upkeep of keeping the church open.

The Bishop would not hear of it. He had a female assistant write back to scold that such a "Traditional" use of that building for a Latin Mass would be a closed-minded, backward-looking denial of the "Spirit of Vatican II." She also wrote that the "old Mass" was as well a superstitious, sexist and anti-American disregard of the enlightened trends that, since 1968, have allowed lay women more involvement in the liturgy. The "new Mass" was a refreshing departure from ancient and European influences that failed to value the horizontal nature of the liturgical assembly. Besides, she concluded, the building was being considered for a possible profitable lease to a growing Islamic community that was seeking to establish the first of a number of Mosques in the greater metropolitan area. It was clear from her concluding remarks that both she, and her immediate boss — the Bishop — thought it would be better for Moslems to be worshipping in that old Catholic church building than the followers of the offensive, and long ago disregarded Traditional Catholic religion of rules and values, which they had no use for in the chancery offices of the Diocese.

Diversity — with some notable exceptions — is considered preferable to a homogenous and sexually-repressive old-style Catholic faith Tradition. Islam — though similarly repressive in some ways like the old Catholic religion — was also a strong ally in the fight to keep the inner cities from ever regaining that old Catholic perspective that is capable of being reawakened by these eloquent and determined Traditionalist crusaders.

For the Diocese, the enemy of its enemy is its friend — at least for now. The higher Diocesan officials were calculating that the rate of spiritual collapse among the historically "Christian" denominations will outpace the real growth in Islam throughout the country. If things go as planned, Islam will help eradicate the remaining remnant "conservative" Jews and Christians who still possess any biblical memory. Eventually Islam too would have to be crushed once it had outlived its usefulness as an annihilating force against Judaism's and Christianity's remnants.

The ultimate total vaporizing of Islam as that last obstacle to a supernatural-free humanistic religion, consisting of mankind's worship of mankind, would be easy to engineer. It would be simple to turn the course of public opinion overnight, one-hundred-eighty degrees.

The reversal would be from a welcoming, multi-cultural acceptance of diversity, featuring an open-arms invitation to foster the western growth in Islam — to a sudden full-court press and violent surprise attack on the same Moslem communities. This would come about once the allied media chose, in accord with the plan, to finally push the button to broadcast the already compiled video avalanche. That cascade would consist of the release of crates of accumulated but closeted films on the intolerant and violent nature of Traditional Islam from both before and after 9/11. It would feature as well the complicit reluctance of "moderate Moslems" to speak out against their more traditional Islamic and brutal brothers and sisters. The non-Islamic population would be easily convinced that if the Jews and Christians were bad, the violent or complicit Moslems are even worse. Islam would then be eliminated even faster than were Judaism and Christianity.

Mass began a little later this Sunday due to the ever-growing confession lines. That always was the case in every new mission seeded by the priests of the North American Center. Rather than a nuisance, it was seen as a minor complication — one that is prayed for, and, consequently, expected. Just as the sign of the dying faith of a parish is the absence of baptisms and penitents, the growth in faith — as seen in Ars as well as in this former J.C. Penney store — was represented by the ever-growing line outside the confessional as well as the collection of white-laced newborns in the arms of Godparents that occupied Father after every Mass. It was almost noon before the last delighted family of many children made their way out the double glass doors onto the now-crowded avenue.

By the time Father Antonio had zipped the last of his vestments up in the suit bag, the Deacons had already packed the cases away in the trunk of the car and returned to escort the priest to the lot. Father Antonio took some time to squint his eyes into focus after he stepped out of the dim storefront and locked the door. The parade had already begun. A few late model cars, decorated with rainbow banners, carrying local politicians and community dignitaries, had already passed. The riders were escorted by their walking volunteer staff who busily handed out tri-fold pamphlets.

There were some children passing by, dressed up as animals and plants, behind a banner reading "Children of Mother Earth." The adults walking with the children were singing some chant about treating all living things as we ourselves wish to be treated. From the context of the children's costumes, it was clear that the child in the rabbit or evergreen suit was considered no more valuable than an actual rabbit or evergreen.

Two adults walking and chanting among the children noticed the three cassocked clerics standing on the sidewalk. Immediately their green- painted faces changed from enthusiasm to anger. They both began pointing to the priest and deacons and broke into a different, angry rhyme about abortion ("choice"), birth control, homophobia and the Church. The children innocently maintained the cadence of their friendly little lyric, walking in their fun costumes. At a completely different level and perspective, their manipulating handlers let fly pure hate speech above the heads of their little ones, punctuating vile insults with obscene hand gestures directed against the three anachronistic observers.

The three men of God, silent and behind dark glasses, watched their detractors pass only a few yards away — yet separated from them by a virtual canyon of understanding and respect of the human person and his or her soul.

They stood in their black cassocks like costumed counterpoints to the oncoming, noisy procession of men and women following more multi-colored striped banners proclaiming the need for "equal rights now" and "the end to Religious Haters." Father Antonio picked up a few tri-fold samples that had already found their way to the sidewalk. The message was classic far left wing Democrat: Pro-Abortion. Pro-Homosexual-Rights. Pro-Homosexual-Marriage. Anti-Religious-Right....

"What hath 'the spirit of Vatican II' wrought?"