Heroic Media has two goals: to provide women facing unexpected pregnancies with hopeful alternatives through mass media advertising, and to create a culture of life. The establishment of Heroic News addresses the second goal.

The father of the pro-life movement, Joe Scheidler — for whom I worked from 2001 to 2002 — was honored on April 2 at an "Evening of Tribute" banquet attended by over 400 pro-lifers.

The tribute's organizer, veteran pro-life activist-author-theologian Monica Migliorino Miller, explained why she decided to have the tribute: 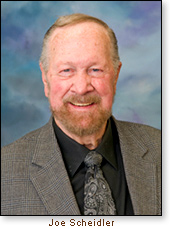 "Thirty years ago Joe invented pro-life activist strategies, ways of confronting the evil of abortion at the very place where the unborn die. His whole approach is unique, bold and inventive. Moreover, Joe's legacy is one of rare sacrifice. He deserved this honor and I'm proud to say I know this great and holy man."

About 24 angry, goofy and vocal pro-abortion demonstrators tried to rain on Joe's parade, so to speak — they reportedly slashed the tires of at least one vehicle belonging to a couple attending the banquet — but they were countered by about 40 young pro-lifers who staged their own (peaceful) counter-protest of the pro-aborts.

Among the pro-life leaders who gave testimonials during the banquet were Janet Morana of Priests for Life, David Bereit of 40 Days for Life, Doug Scott of Life Decisions International, and Jim Sedlak of American Life League.

The testimonials were followed by a short film, produced by Monica's Citizens for a Pro-Life Society, which effectively captures the essence of Joe's commitment to the pro-life cause. The film may be viewed at www.prolifesociety.com.