Matt C. Abbott
The story behind an upcoming pro-life conference

'I first met Father Smith Jones (not his real name) in 1998 while doing a house call for his mother, Jane (not her real name). A brief initial conversation with them revealed that he was living in a small apartment only a block from my Podiatry practice, and that we shared many common traditional Catholic and pro-life interests.

'Jane later told me that after several years of marriage, she and her husband thought they could not have children, and they prayed to St. Gerard Majella for a child. Some years later, Father Smith was born and was named after St. Gerard. A first class relic of St. Gerard was one of Father Smith's prized possessions, and Jane maintained a deep devotion to St. Gerard until her death at age 101.

'Father Smith soon became a close friend; we met frequently for meals. I assisted him with various tasks around his apartment, and he called me frequently for fellowship. He got to know my wife and children well and relied on us for help, as his only brother lived in [location redacted]. Father Smith eventually developed Parkinson's disease. We offered to take him into our home, but he declined and entered a nursing home. We continued to visit him often and took him out to dinner at his favorite restaurants.

'In late 2007 and early 2008, Father Smith's health declined rapidly. He left a voice message on my cell phone late on a Wednesday in April 2008, asking me to stop to visit. By the time I was able to visit him two days later, he had been admitted to a local hospital for aspiration pneumonia, and had been diagnosed as 'terminal' by the treating physician. He was transferred to the palliative care unit. The treating physician and Father Smith's brother, citing his Living Will, insisted that Father Smith wanted no extraordinary care to prolong his life.

'I was shocked that he was receiving no water, no food, no IV — only Morphine. His Parkinson's was advancing and the aspiration pneumonia was a crisis, but neither were imminently terminal. We were permitted to wet a sponge to moisten his lips, and he would try to suck all the moisture from the sponge, but we were forbidden to give him a drink of water, ostensibly because of the risk of further aspiration pneumonia. Father Smith had shared with me his opposition to euthanasia in the past, and he was trying to talk to me, but he had become so dehydrated that he could not form any words.

'When the attending physician made rounds, I told him my concern that Father Smith was receiving no food or water. The physician, a Catholic father of six, asserted that their hospice rules forbid IVs because it only prolongs the dying process. He then stated, 'The public has a misconception that death by dehydration is torturous, but that's not true. It's the most humane way to do this, with the least discomfort. We'll control any discomfort with the Morphine. That's what we're going to do.' And with that he looked me in the eye defiantly, turned on his heel and left. I was speechless. I pleaded with Father Smith's brother that he would never have consented to euthanasia by dehydration — to no avail.

'I've always been pro-life. I even attended pro-life conferences about euthanasia and sat on the medical ethics committees of two hospitals in the mid 1990s. I had staff privileges at the hospital in question. But in April 2008, in Father Smith's specific case, I simply did not know what to do. I called four solidly pro-life priests begging for advice. They all agreed: 'You have to do something, Brian!' But none could offer any specific advice, and none could personally intervene to help save their fellow priest. Another priest I consulted recommended I request a medical ethics committee consultation.

'Late on a Thursday evening, eight days after Father Smith had left the voice message on my cell phone, I spoke with a physician's assistant who was on call for the ethics committee. I told her that he was a good priest and a faithful son of the Church who would never agree to being euthanized, and I discussed with her the relevant documents from Rome and the USCCB and Pennsylvania bishops. She asked me to enter these documents in Father Smith's chart and the medical ethics committee would be happy to review the case Friday morning during rounds.

'Relieved that there was something I could finally do for this good priest, I went to the hospital Friday morning at 7:00, asked the unit clerk to formally enter the documents into his chart for the ethics committee consultation, and headed down the hall to visit him. His room was already empty. Father Smith had died of dehydration several hours earlier.'

In honor of his late priest-friend, Dr. Kopp has assisted Thomas McKenna of the St. Gianna Physician's Guild in organizing the following pro-life conference: 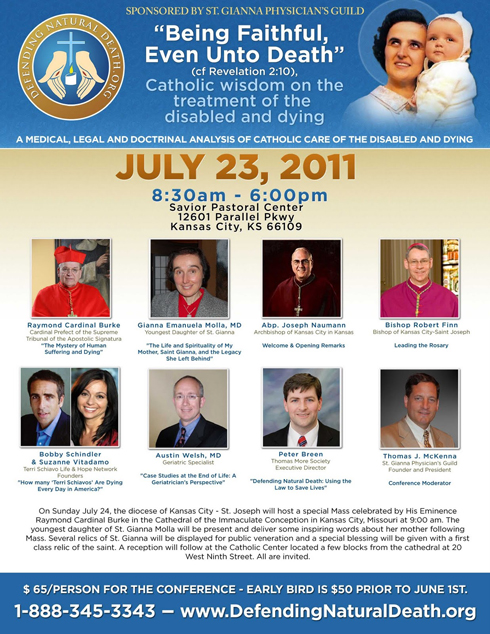