May 31, 2011
The following is the Introduction to Michael L. Brown's latest book A Queer Thing Happened to America: And What a Long, Strange Trip It's Been. Thanks to Dr. Brown for allowing me to reprint his material. The book can be ordered by clicking here.

FROM STONEWALL INN TO THE WHITE HOUSE:
WHAT A LONG, STRANGE TRIP IT'S BEEN

June 28, 1969, Greenwich Village, New York City, 1:20 AM.
The Stonewall riots begin.
Police had often raided gay bars in the city, including the Stonewall Inn, and it was always without resistance. But on this fateful night, things were different. The clientele fought back, and soon the police were dealing with a full-blown riot.

Interestingly, the primary reason for the police action that night was not the conduct of the homosexual patrons. To be sure, back in 1969, people of the same sex were not allowed to dance together in public and cross-dressing was illegal. But neither of those offenses sparked the Stonewall raid. Instead, the police were cracking down on the Mafia, using the bar's illegal selling of alcohol as the formal pretense for their actions.

As in most Mafia-run joints, the Stonewall operators exploited the opportunity to blackmail successful older patrons. A staff member would strike up a conversation with a successful-looking man, learning his name and profession. If the mark worked in a law firm or stock brokerage, he was later blackmailed with the threat of being outed to his colleagues. The discovery of this operation led to the famous Stonewall raid on June 28, 1969.

Sometime in early 1969 INTERPOL, the UN-affiliated international police organization, noticed an unusual number of negotiable bonds surfacing in foreign countries and requested that the New York Police Department investigate whether they were counterfeit. Police detectives found that the Mafia had been acquiring large numbers of bonds by blackmailing gay employees of New York banks. From studying police reports on various gay clubs, investigators concluded that the extortion rings were operating in Greenwich Village. The Stonewall . . . quickly became a prime suspect in a multimillion-dollar international criminal enterprise. [1]

The police were determined to shut the place down, and so during the raid, they actually tore up parts of the bar. In keeping with their customary routine, they also began to arrest the transvestites (who were accustomed to being booked and then released a few hours later) along with the bar staff. But the rest of the patrons, rather than heading over to another gay bar as they typically would have done, lingered outside, watching the events unfold and turning it into a festive event. Soon the crowd had grown to 150 interested onlookers.

But the good humor vanished when a police officer began shoving a transvestite who turned around and slammed the cop with his purse. Another officer rushed over and clubbed him with a nightstick. Moans and furious yells erupted from the crowd. One witness recalled, 'People began beating the wagon, booing, trying to see who was being hauled out and off. Several pigs [cops] were on guard and periodically threatened the crowd unless they moved back. Impossible to do." One young man roared, 'Nobody's going to f — around with me. I ain't going to take this s — .' Pennies pinged against the side of the paddy wagon punctuated by the loud slam of a beer can. [2]

As the police tried to arrest more patrons and push them into squad cars, "The whole crowd went berserk. 'Police brutality!' 'Pigs!' 'Up against the wall, f — s!' 'Beat it off, pigs!'" [3] Within minutes, the crowd was out of control and the police, fearing for their safety and not wanting to use their guns, retreated into the bar and barricaded themselves in, calling for reinforcements. 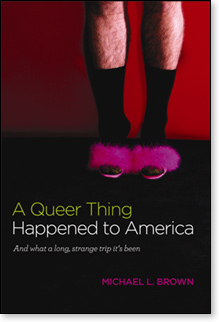 Someone hurled a garbage can through the bar window; gay patron Morty Manford later likened the shattering of glass to "the lancing of the festering wound of anger at this kind of unfair harassment and prejudice." [4] The cops were now under siege, trying to board up the windows with plywood as they continued to wait for reinforcements to arrive.

The bar door was smashed open, followed by a hail of beer cans and bottles, one of them striking a policeman and opening a bloody gash under his eye. Others in the crowd tried to set the building on fire, while another group ripped a parking meter from the pavement and used it as a battering ram to try and break through the door. Bricks were hurled at the cops and their vehicles. Chaos was erupting in the streets, and the crowd wanted blood.

The mob became even more frenzied when someone in the crowd lit a trash can full of paper and stuffed it through one of the bar's windows, setting the coatroom ablaze. . . . A short, scrawny kid poured a can of lighter fluid through another broken window, followed by a match. [5]

The flames danced dangerously close to the lead officer, Inspector Pine. People were in a frenzy, and the impassioned, out of control crowd, feeling its power for the first time, was not about to stand down, even when two busloads of riot police arrived.

Equipped with helmets, shields, and billy clubs, the riot police lined up shoulder to shoulder like Roman legions and pushed their way down Christopher Street. Squaring off against one of their flying wedges was a brave, if foolish, group of street kids who formed a Rockette-style kick line while singing,

We are the Stonewall girls,
We wear our hair in curls.
We wear no underwear:
We show our pubic hairs.

The riot police charged into the kick line, smacking the singing youths with night sticks. Over the next hour, gay rioters dodged cops in the winding streets of the Village, setting fires in trash cans and breaking windows. [6]

News of the uprising spread rapidly (the media was intrigued by the fact that it was homosexuals — hitherto stereotyped as limp-wristed "fairies" — who were fighting back), and by the evening of the 28th, less than 24 hours after the initial raid, several thousand people had gathered in the Village proclaiming, "Gay Power," "We Want Freedom Now," and "Equality for Homosexuals." And rioting erupted again, [7] with police cars in particular becoming "the targets of the crowd's mounting aggression." [8] Once more, riot police were called in to quell the crowd. But a line had been crossed, and for the homosexual community, there was no turning back.

Thus the spark that ignited the gay liberation movement was lit: Two nights of rioting in response to a police raid; attacks on arresting officers and an attempt to injure them or even burn them alive; vandalizing of police cars; chaos on the streets . . . . This was the Stonewall uprising.

June 29, 2009, Washington, DC, 7:00 PM
President Barack Obama welcomes 300 gay activists to the White House
to commemorate the 40th anniversary of the Stonewall riots
Addressing the enthusiastic gathering with the words, "Welcome to your White House," Barack Obama, the 44th president of the United States of America, spoke proudly of

the story of the Stonewall protests, which took place 40 years ago this week, when a group of citizens — with few options and fewer supporters — decided they'd had enough and refused to accept a policy of wanton discrimination. And two men who were at those protests are here today. Imagine the journey that they've traveled. [9]

Yes, imagine the journey, from the Stonewall Inn, quite literally, to the White House. In the words of a famous Grateful Dead anthem, "Lately it occurs to me, what a long, strange trip it's been." [10]

A long, strange trip indeed. Perhaps even a queer trip. Or how else should we describe it when McDonald's — the ultimate, kids' fast-food chain, the world famous Mickey D's, the home of Ronald McDonald the clown — finds it appropriate to air a TV commercial proclaiming that, "Gay pride month commemorates the June 1969 rebellion of a courageous group of gay, lesbian and transgendered people who took action during a raid on New York City's Stonewall Inn." [11]

McDonald's celebrating the rebellion of a courageous group of gay, lesbian and transgendered people at Stonewall? The president commemorating a violent assault on police officers before a handpicked audience of 300 gay activists in the White House?

During his address, President Obama belittled those who "still hold fast to worn arguments and old attitudes" (like the notion that homosexual practice is wrong according to the Bible, or the idea that marriage is the union of a man and woman). And the president singled out Frank Kameny for special praise and appreciation — Frank Kameny, now in his 80's, a courageous gay rights pioneer [12] and a sexual libertarian of the most extreme kind, a man who wrote in 2008, "Let us have more and better enjoyment of more and better sexual perversions, by whatever definition, by more and more consenting adults"; and, "If bestiality with consenting animals provides happiness to some people, let them pursue their happiness"; and, "Let us have more and better enjoyment of more and better and harder-core pornography by those to whom such viewing provides happiness"; [13] a man who stated that the God of the Bible is a "sinful homophobic bigot" who needs to repent. [14] Of this man President Obama said, "And so we are proud of you, Frank, and we are grateful to you for your leadership" [15] Grateful for your leadership?

Yes, it really has been a long, strange, and, for many, quite unexpected trip thus far. But the story has just begun.

"Tactics of the Homosexual Movement"

"My Take: The Bible really does condemn homosexuality"

"The Truth About the Homosexual Rights Movement"