'This post consists of excerpts from a letter I wrote to the pastor of a Catholic parish about a certain incident that occurred at his church. I have omitted all references as to the church's location. The church is semi-circular in design, and we were sitting in the last pew near the center isle, which afforded us a clear view of almost the entire congregation. I started my letter with a compliment as to how nice the newly-remodeled church looked. I then ask the pastor to please consider the following hypothetical situation.

'A priest enters the confessional for the usual Saturday morning or afternoon confession time. During this time a young man enters the confessional. 'Forgive me, Father, for I have sinned.' From the sound of the voice on the other side of the screen, the priest surmises that the person is a teenager or young adult. The confession continues: 'It was a week since my last confession. I'm guilty of many lustful thoughts, and I looked at some very immodestly dressed women more times than I should have.'

'The priest asks, 'Were these impure thoughts related to these women you looked at'?

'The priest: 'Why did you continue to look at them? Why didn't you go someplace else, away from them?'

''I couldn't,' said the young man. 'They were in front of me and I was kind of hemmed in by the crowd.'

'The priest: 'Why were you in such a place to begin with? Do you remember that we are to avoid places that may be an occasion of sin?'

'The young man answers, "Yes, Father, I know that, but I had to be there.'

'The priest, somewhat puzzled, then asks: 'Why did you have to be there, and where were you: at the beach; at a sporting event?'

''No, Father,' said the young man, 'I was at your noon Mass last Sunday, and two scantily-dressed girls were sitting in the pew right in front of me, along with their parents. I couldn't move because my parents were on either side of me.'

'While I said that the above story was hypothetical, in reality it is not. The Mass in question took place this past July at a prominent Catholic parish in a town my wife and I were visiting. It was the main Mass of the day and the church was quite full.

'The young man in the confessional could have been any one of the many young men in the church. The two 'scantily clad' girls were real and were sitting about six pews in front of us with their parents.

'From the area where we were sitting, we observed, in addition to the two girls mentioned above, approximately a dozen very immodestly dressed women, with the majority of these being young girls in their teens and early twenties. Bare backs and shoulders, low-cut tops, strapless sun suits, short shorts, mini-skirts and tight-fitting tops were plainly visible. 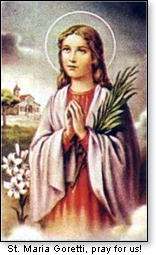 'Two years ago, at a parish in northern Virginia, we experienced an almost identical incident at Sunday Mass. We were sitting in our pew when a home-schooling family came in and took a place several pews ahead of us. They had two sons around age 10 and three younger daughters. A few minutes later, two young girls, of about the same age and manner of dress as the two described above, came in and sat in the pew directly in front of this family. However, in this case, the parents quickly recognized the spiritual danger these two improperly dressed girls posed for their children, and they immediately got up and moved to another part of the church.

'It is a sad state of affairs when going to Sunday Mass becomes an occasion of sin. I could go on with more such examples, but I think what I have said is sufficient. What we find more lamentable is the fact that, in many cases, such young girls are in the company of their parents. What does this tell us? Simply this: When it comes to modesty in dress, most parents don't have a clue as to what is right.

'Coincidentally, several days later, as I was about half-way through the composition of my letter to the pastor, my wife saw a notice in the bulletin about appropriate dress in church. The notice was good, especially the part about adults giving good example for young children. It did, however, have two shortcomings which are common to such notices. Many times a bulletin notice can be overlooked, and secondly, the notice called for wearing 'appropriate attire.'

'The problem, as I pointed out above, is that most Catholics have a very poor understanding of what 'appropriate attire' means. When it comes to knowing what is or isn't modest, they have no idea. This is because the Church has been silent on this subject for over 40 years.

'At the beginning of summer there should be a strong sermon on this issue with a clear explanation as to what constitutes 'appropriate attire.' This should be followed up with at least a verbal reminder given once a month from the pulpit. Putting an occasional notice in the bulletin just doesn't do it. It should also be emphasized that the standards for modesty apply to everyday dress, not just in church on Sunday. Mention should also be made about the way many parents dress their little girls in skimpy outfits, thus accustoming them to immodesty at a very early age.

'In regard to this particular topic, I feel I'd be remiss if I failed to mention the disgraceful display of immodesty exhibited by brides and their bridal parties at most Catholic weddings today. At a wedding we recently attended, the comment was made that the bride and bridal party looked more like the Playboy Review than an occasion of Holy Matrimony.

'Let me close with the following thought. Someone once asked the mother of St. Maria Goretti how she was able to raise such a [holy] child. She replied, 'By teaching her the virtue of modesty.' How many Maria Goretti's are parishes and Catholic schools producing today?'

Please pray for the repose of the soul of Richard O'Connor, who was a wonderful pro-life activist and family man.